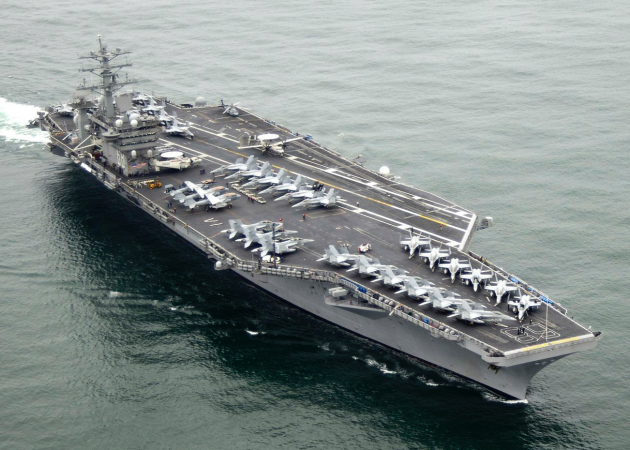 Recently released commercial satellite images have revealed the Iranians are attempting to reconstruct a replica of one of the United States’ largest and most powerful warships, the USS Nimitz.

Construction on the crude model appears to be in full swing at a shipyard near Bandar Abbas, as shown in newly released commercial satellite images.

‘They got this barge and threw some wood on top of it to make it look like the USS Nimitz. That’s all we know for sure,’ a U.S. defense official told AFP…

The wooden, non-operational aircraft carrier made to look like a Nimitz-class nuclear-powered American vessel was first spotted on the Persian Gulf last summer, the New York Times reported.

Besides having the shape of the 1,100-foot-long carriers, such as USS Abraham Lincoln and USS Carl Vinson, the shipbuilders also replicated the distinctive white markings on bow.

A satellite flying over Gachin shipyard also photographed a fake plane parked on the deck of the equally fake carrier.

The rationale behind the fake aircraft carrier remains a mystery, but one theory suggests it will likely be used as a prop to be blown up in an Iranian anti-American propoganda film.

The surreptitious move by the Iranians has cast more doubt on the President’s ability to successfully defuse Iran’s nuclear aspirations, a goal he has attempted to carry out by softening economic sanctions on the middle eastern nation.

Back in November, negotiations between Iran and a coalition of countries that includes the United States brought about an interim agreement over Iran’s nuclear program. Iran agreed to roll back parts of the program in exchange for an end to certain economic sanctions.

Negotiations on a larger deal are ongoing.

The creation of a mock aircraft carrier likely to be used in an effort to spread more anti-American propoganda region is a window into the reality of U.S.-Iranian relations.

This past week, marking the Persian New Year, President Obama said he is “committed to diplomacy” with Iran.

The Iranians, however, may not be on the same page.

More transparent propaganda theatre. Unfortunately the majority of Iranians will probably believe it.

OR – they want to use it as a practice for kamakazi or bombing attacks.

Note for whomever thumbed this down- mock-ups of military items are generally built for the express purpose of practicing attacks. This particular explanation has been advanced on many military blogs.

I hope they are not sniffing the glue while they put that model together…and don’t forget the decals you guys!

Didn’t the Japanese already do this back in 1941?

If they mean it as a practice target, what does that tell us about their ability to build computer simulations? Looks like just another example of Iranian zaniness, or maybe magical thinking.

Simulations are fine but the airedales need to look at the real thing in practice. It’s how they develop mission proficiency.

Sure, it could be just a mock up to be exploded for video propaganda, but my bet is that the Iranian air and naval forces will use it first to train their people. THEN they’ll blow it up.

The problem is that if so much of the CVN is wood, odd bits that are supposed to be steel, will bob to the surface. Of course, they will probably have junior members of the Revolutionary Guard strapped with weights on hand to tie themselves to the pesky flotsam and sink it.

Its only use would be in a propaganda effort.

You don’t need anything but photos of your target, and if you can hit a typical barn, you will hit an aircraft carrier.

Of course, getting there is at least half the fun…

Sorry Jack, But at 300 or 400 kt, On a bomb run it take more the typical barn door accuracy to hit anything, Thi sis rocket science, and if you don’t know what you are doing you will screw the pooch big time.

Double for this administration, McCain, Pelosi, McConnell, Reid, the Bushes and their ilk.

Don’t call me a conspiracy nut – Boeing says so too. They have OnStar tracking on the engines.
Boeing – http://pjmedia.com/tatler/2014/03/21/chambliss-boeing-says-no-way-would-catastrophic-event-turn-off-transponder/

I accidently hit the down vote on the first comment.

If they attack the carrier, I am prepared to retaliate with the goat in my back yard!

Whatever it is, I’m certain that hundreds of Hollywood actors and backers will be willing to assist in its creation, use, and eventual destruction.

Hey, not to worry! It’s just a movie prop according to the Iranian government.

Kinda like the American UAV (drone) they claim crash landed in Iran back in 2011-2012? They had it sitting in a gymanasium for photographs and the thing was clearly made of wood. I think they modeled it after the “Beast of Kandahar”.