How does Iran show its moderation to the US? By appointing a suspected hostage taker as UN ambassador. 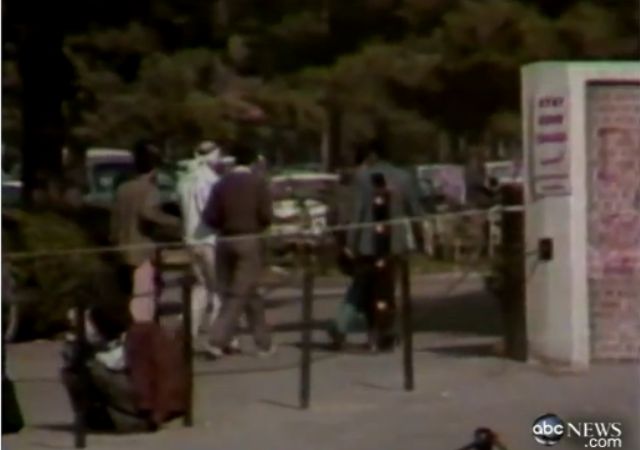 Three weeks ago, the Washington Post reported glibly in U.S.-Iran relations thawing somewhat glacially, “Hamid Aboutalebi, formerly that country’s emissary to Italy, to Australia and now to the United Nations, can’t seem to get his U.S. visa. He’s apparently been waiting for months and no one in Tehran is quite sure why the delay.”

Now Bloomberg News reports the likely reason: Aboutalebi is suspected of being “a member of the Muslim Students Following the Imam’s Line, a group of radical students that seized the U.S. embassy on Nov. 4, 1979” and held American citizens hostages for 444 days.

Relations between the Islamic Republic and the U.S. and its allies are beginning to emerge from the deep freeze that began when the self-proclaimed Iranian students overrun the embassy and took the hostages. The State Department hasn’t responded to the visa application, according to an Iranian diplomat.

A controversy over Aboutalebi’s appointment could spark demands on Capitol Hill and beyond during this congressional election year for the Obama administration to take the unusual step of denying a visa to an official posted to the UN. It also could hamper progress toward a comprehensive agreement to curb Iran’s nuclear program, which the U.S. and five other world powers are seeking to negotiate with Iran by July 20.

It’s disturbing that the Washington Post and, less explicitly, Bloomberg are putting the onus on the United States. Appointing someone who violated civilized society’s norms by attacking an embassy as an ambassador, is an affront to those norms. Asking that that person be granted the protections that he violated is pure chutzpah. (The UN would not be Aboutalebi’s first diplomatic posting; he’s been Iran’s ambassador to Belgium and Italy, previously.) Showing such disrespect to the United States undermines the notion that Iran is currently being led by a moderate or even a relative moderate.

In a couple of tweets Marc Leibowitz expresses his disgust with Iran and with the UN. 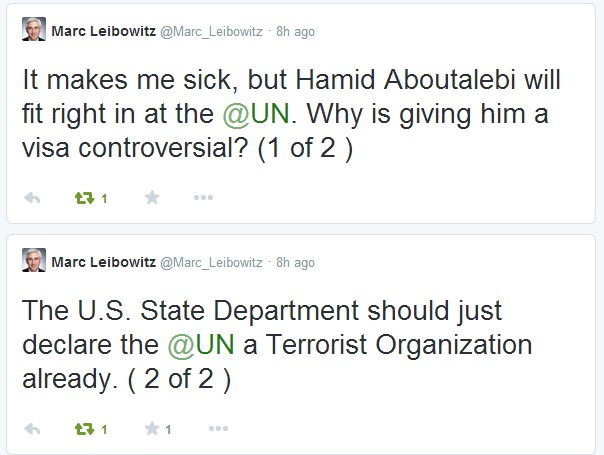 Put me down with Marc Leibowitz.

There MIGHT be an argument for the US staying in the UN as a member.

There is NO argument for keeping it here, or for paying for it.

It long ago became inimical to US interests and values.

The Birch Society had it right decades ago with its slogan,

The UN is pure democracy with a smidgen of a check/balance with the veto of the five Security Council members which is only rarely used. Because of this raw majority vote mechanism, condemnation of Israel is so routine one’s head spins. The Muslim bloc, the 56 countries of the OIC plus the Palestinian Authority, is able to gather other tyrannical, one-man, one-party rule members that nothing resembling common sense comes out of the UN.

So, which way America, the way of the Framers, limited government, personal responsibility, or the way of the UN/EU/USSR/Islam model? There’s no middle road.

Here’s a suggestion. The UN was established with the best of intentions and still might perhaps have a role to play IF it could be cleaned up. Most of the criminal element at the UN are pseudo-diplomats, enjoying the perks of diplomatic life in one of the world’s most glamorous cities together with a respite from their repressive societies back home.
Move the UN to Binghamton or Syracuse.
These wonderful cities could do with an economic boost and being less glamorous would disincentivize the corrupt lazy diplomats from wanting to engage with the UN (would con artists like Hilal Elver and Richard Falk want to live in upstate NY?), perhaps leaving those who actually want to help the stated mission of the UN.

What’s the point in freaking out about this? Nobody freaks out when Iran, Saudi Arabia, Venezuela and other oppressive countries sit on or head the Human Rights or arms council. Everybody sucks it up. Well, is it any wonder he Iranians have posted a terrorist to the UN, a body that is devoted to the condemnation of Israel?

Iran’s message: suck it up.

Heh. I do wonder if the UN made the Southern Poverty Law Center’s list of hate groups.

I wish I could be surprised by the news coming out recently, but I guess I’m just too jaded now.

I am anxious to see how the NYT and the rest of the MSM will spin this to keep the whole “Iran’s newfound moderation.” My bet is they do their utmost to downplay it, paint Aboutalebi as “having seen the light,” or talk about his appointment as being a concession to Iranian hard-liners.