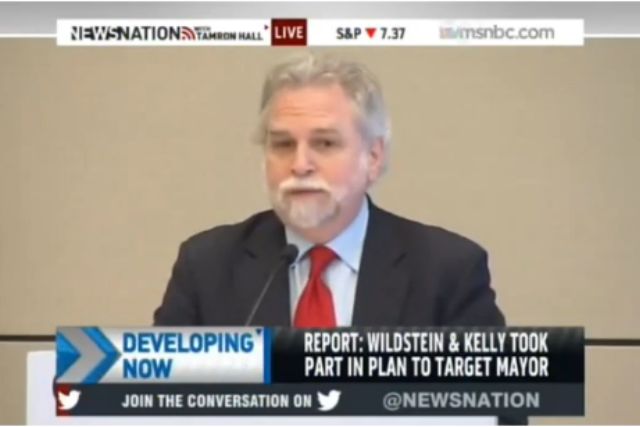 The findings of an internal investigation into the controversial September lane closures near the George Washington Bridge indicated on Thursday that NJ Governor Chris Christie had no involvement in the decision to close the lanes.

From NorthJersey.com /The Record:

Two former high-level Christie appointees share almost exclusive blame for the George Washington Bridge lane closures, according to a report commissioned by the Christie administration that concludes Christie and current members of his staff were not involved in the closures and other allegations of impropriety that surfaced in the wake of the scandal.

Bridget Kelly, a Deputy Chief of Staff in the governor’s office who was fired in January, and David Wildstein, a Port Authority official who resigned in December, planned and carried out the September lane closings, the 360 page report said.

In a press conference Thursday, attorney Randy Mastro of the law firm Gibson Dunn, which produced the report, announced some of the highlights of the findings.

“We found that Governor Christie had no knowledge beforehand of this George Washington Bridge realignment idea and that he played no role whatsoever in that decision or the implementation of it.  We further found no evidence that anyone in the Governor’s office besides Bridget Kelly knew of this idea in advance or played any role in the decision or the implementation of it.”

“What we did find was that after the decision to implement the lane realignment, while it was going on and in its aftermath, the members of the Governor’s office, some of them, became aware of the lane realignment, inquired of Port Authority representatives, and were told this was a legitimate traffic study and that it was an operational issue for the Port Authority to deal with.”

When asked by a reporter about the fact the firm was hired by the Governor’s office, which might make the findings seem suspect to some, Mastro responded that the premise of the question was wrong because it implies his law firm works for an individual, rather than a public office.

“Our law firm was retained by the Office of the Governor, we were retained by a public office and we have an obligation to that public office,” Mastro said. “And whatever the facts were that we found…our obligation – and it was publicly stated – was to report those findings back to that office, and that office announced publicly long before we’d reached any point of rendering findings or knowing what our findings would be, that those findings would be put out to the public. Had we found evidence to the contrary of what we found, we would have been reporting that.” (Complete clip of that portion of the press conference at The Right Scoop).

There appear to be some other interesting portions in the report however, as well as some additional criticisms of it, as Town Hall has noted.  And additional federal and legislative investigations are still underway, according to the Associated Press.

I have not had the opportunity to read through it yet myself, but a full copy of the 360 page report is available here.

Bridget Kelly, a Deputy Chief of Staff in the governor’s office who was fired in January, and David Wildstein, a Port Authority official who resigned in December…

Kelly and Wildenstein were boinking. The news came out today.

While this is better than having the State Department investigate the Bengazi mess, and while I know and respect the Gibson Dunn firm, it still is an internal investigation, so it takes a credibility hit in my mind. On the other hand, our government bodies have all become so hyper-politicized that having a government investigation would be a waste of time.

They got to drag Christie’s name through the mud with insinuations and the sort of 24/7 coverage that implies much worse is going and always likely to break soon. They do it to every medium to big name Republican or conservative for as long as they can make it last, milking ever drop of propaganda from the story.

Bin sayin’ that myself ever since the big lugga-hug. Let him be Hitlery’s problems instead of ours.

Explain to me one more time, did stopping traffic in one lane of the bridge cause the ATF to lose track of automatic weapons flowing into Mexico? Or, did it allow Islamic terrorists kill a US embassador in Syria?

Oh nevermind. I just saw an update on MSNBC that explained how the Bridge closure caused flight 370 to disappear in the Indian Ocean.

None of the above. It was an unavoidable artifact of the Benghazi debacle.

The fix is in. Democrat polling indicates Shrillary can beat Christie but loses to Rand Paul, Scott Walker and Rick Perry.

Do you have a link to that poll?

Well that clears up that mystery. No need to worry. All is well. We may return to our idle pursuits. Ho hum.