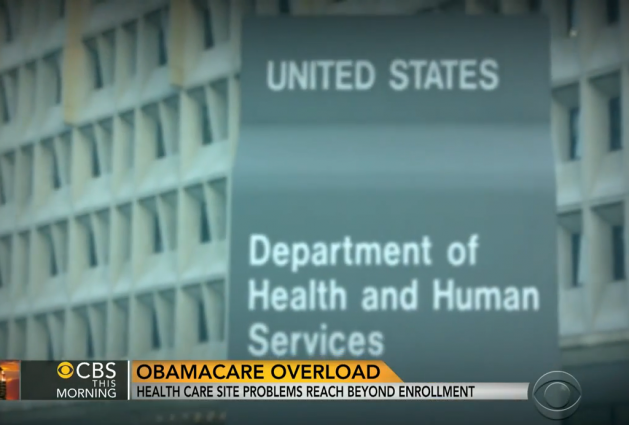 The former Director of the Office of Research Integrity (ORI), David Wright, recently resigned in powerful fashion, penning a scathing letter to his boss in the Department of Health and Human Services (HHS) about the “remarkably dysfunctional HHS bureaucracy.”

The letter, written on February 25th and recently published at sciencemag.org, details the “intensely political environment” that is HHS, the department charged with crafting and implementing Obamacare policy and regulations.

Apart from being famous for drafting 20,000 pages of onerous regulations inspired by the nearly 2,000 page Obamacare statute, HHS also made headlines for it’s spectacularly disastrous rollout of healthcare.gov, the website responsible for ensuring the American people are actually able to comply with the new healthcare law.

In the wake of the rollout controversy, the American people were livid, many calling for the Secretary of HHS, Kathleen Sebellius, to resign. At minimum, the public wanted someone to be held accountable for the incredibly expensive, taxpayer funded, disaster. In the end, no one ever was.

According to Wright’s letter of resignation, unaccountability is the name of the game at HHS [Emphasis Added].

[T]he organizational culture of OASH’s [Office of Assistant Secretary of Health] immediate office is seriously flawed, in my opinion.  The academic literature over the last twenty-five years on successful organizations highlights several characteristics: transparency, power-sharing or shared decision-making and accountability.   If you invert these principles, you have an organization (OASH in this instance), which is secretive, autocratic and unaccountable.

In one instance, by way of illustration, I urgently needed to fill a vacancy for an ORI division director.  I asked the Principal Deputy Assistant Secretary for Health (your deputy) when I could proceed.  She said there was a priority list.  I asked where ORI’s request was on that list.  She said the list was secret and that we weren’t on the top, but we weren’t on the bottom either. Sixteen months later we still don’t have a division director on board.

There was a time when the vast majority of the American people understood that there is such a thing as too much bureaucracy. Although a large contingent of the American public still understands this, and it was one of the primary drivers behind resistance to Obamacare in the first place, it wasn’t enough of a detractor to stop the law’s passage.

What people must understand is that Wright’s resignation letter is the furthest thing from an outlier. Indeed, it is only an anomaly to the extent that it actually saw the light of day.

Obamacare may be “the law of the land,” but it is truly a bad law. As time passes, the American people are continually being exposed to this reality.

This letter, while just one small example, is indicative of one Obamacare’s paramount flaws: it creates a bureaucratic system that is simply too large to be held to any real account. Moreover, it exists in a extraordinarily politicized environment that quells creativity and even respectful, thoughtful dissent.

Since I’ve been here I’ve been advised by my superiors that I had “to make my bosses look good.”  I’ve been admonished: “Dave, you are a visionary leader but what we need here are team players.”   Recently, I was advised that if I wanted to be happy in government service, I had to “lower my expectations.”  The one thing no one in OASH leadership has said to me in two years is ‘how can we help ORI better serve the research community?’  Not once.

Sadly, this is the path the American people have freely laid before their feet. One with lower expectations, stifled visionaries, and a boss who never has to feel the cold hand of accountability. When it comes to the health of our nation, this is simply an unacceptable future.

You want to change it? Find your way to the ballot box this November, because there are still a few folks in power who you can hold accountable.

Much that pro-big government types criticize “Wall Street” and private industry for exists to an even greater degree within the cherished bureaucracies, especially at the federal level.

The near autocratic ruling style is worse than any I’ve witnessed in some of the largest corporate organizations. And where public companies are becoming more responsive to shareholders and investors, the federal bureaucrats are shifting in the opposite direction with greater speed. Less transparency and therefore less accountability not just to those who are paying them, but to branches of government (e.g. Congress) as well.

The “boss” Dr. Howard Koh, who established a leadership program at Harvard University, will simply say to everyone, “This is humbling, we need to fix this, and we can.”

Meanwhile, back in the land of reality, NOTHING will get fixed, NO ONE will be let go (in other words, his DEPUTY will remain). It will be the same thing, different day, as they say.

Dr. Koh’s entire professional reputation and that of his “leadership” program is at stake, and I bet he doesn’t care one little bit. No one.

If he will not be held accountable by curious media who will explore the matter (I’m laughing as I type this), what incentive does he have to take any meaningful action? He certainly has little worry of any recourse from within DC.

I won’t be surprised if the department comes out with public attacks against David Wright to prove he is just a bad apple. If they need to take any public position at all….

I imagine the media’s eye is already focused on Wright’s background.

This attitude spreads like a viral epidemic to the corporate community. Note Apple tells stock holders to take a hike if you don’t like what I’m doing, because I’m right and you’re an idiot. I don’t even have to explain how I’m spending your money, more less be accountable to anyone. The collapse is coming!

Except the Apple stockholder can take his money elsewhere. In that way Apple’s management is accountable. The taxpayer on the other hand is stuck. We can vote but that won’t do any thing to change an entrenched bureaucracy.

there should be an “unexpectedly” somewhere in this post… 😉

The whole U.S. rabbit-hole bureaucracy is not only an outlet for regulatory lawlessness, but it IS one big conduit for money laundering. It can secretly channel funds to donors, Super Pacs, lobbyists and climate change organizers.

Banks, on the other hand, are held legally accountable for such fiduciary opaqueness – but NOT Washington.

It’s time to “tear down these walls.”

Folks, I am retired military and also a “Fed”. You need look no further, to understand the federal constipation, than this job title:

Exactly. I was looking at that whilst reading the post and thinking, “That’s Soviet language and Soviet bureaucracy, with a hint of Maslow to make it feel good.”

I meant to say I am also a retired “Fed” not a current one. I had to bail when I could no longer stand it. Lying has a price if you join in on it and it is your own self respect. What drove me out was the expectation by seniors that I would lie, joining them, about something that was patently against federal law. I could stay and cave or retire two years early. I bailed.

I did too some years ago, though in county not federal bureaucracy. Would not countinence the lie that the agency was outside jihadi scrutiny.

It’s stories like this that lend credence to the argument that Obamacare was never about providing affordable care to Americans and was instead about establishing an unprecedented amount of control over them.

For the purpose of producing a die-off.

This is a consequence of the “professional” civil service. At one time, whenever there was a new sheriff in town (so to speak) he would replace everybody with his own people. This was supposedly evil and bad and reeking of nepotism so progressives pushed for a “professional civil service” whose continued employment wouldn’t be subject to the demands of their bosses. It also meant they weren’t subject to the demands of the electorate since they wouldn’t be replaced when voters cleaned house and ousted their bosses. Naturally, we ended up where we are today, where the bureaucracy rules us, not the other way around, as progressives intended.

I understand your point, however, you are saddly mistaken if you think general schedule civil servants (GS01-GS15) run anything or set any policy in the federal environment. No sir, that is all done by Senior Executive Service (SES) or higher….all appointees and essentially subject to dismissal at will. In short what we have that you and others blame is what you describe for the old county sheriffs….but worse. For the record 9 out of 10 SES ranks that I have dealt with did not have any experience in the field they oversaw. One in 10 has minimal experience.

A prime example of an SES rank official is Lois Lerner of the IRS. Ms Lerner was definitely not a civil servant.

However, as SES they are “flag rank” (like generals and admirals) and even have a flag you are supposed to fly to honor them when they visit your office or FOA. They are institutionalized bureaucrats who will serve anyone who perpetuates them. And they are perpetuated because they have the keys to all the cloak rooms. See the very thing you suspect civil service of is what the SES does.

SES was originally senior civil service ranks GS 16-GS18 until the 70’s when the SES was formed from these positions./…and specifically set up to be appointed positions with a fandango process to make them appear “career types…but they are not. The perpetuate because they know where the skeletons are kept.

That job is SES level. There are no civil servant position descriptions with the words “Deputy” or “Secretary” in them. N-o-n-e.

Thank you for that Bureaucracy 101 tutorial no sarc either.
Explains a lot. My job – and I assume many MANY others – same way. “We” do the work (keep the system afloat somehow) while “They” the politically connected get the title and the office.
“Meet th new boss, same as the …”

Please read the book “Extortion”. It explains a lot about what is going on.