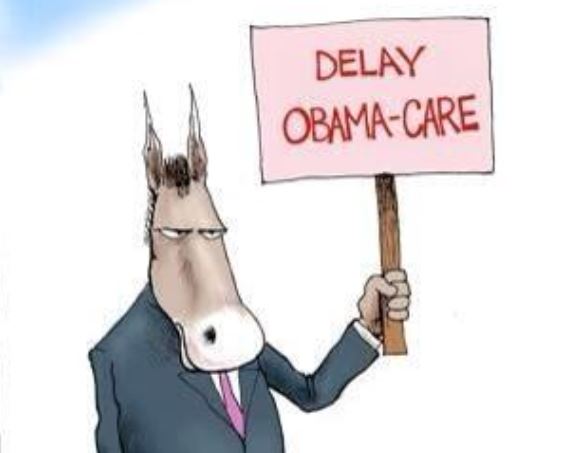 That’s what Ted Cruz tweeted about this Branco cartoon that ran at Legal Insurrection in October, Branco Cartoon – Delay and Conquer.

But I cannot think of ONE of the pretexts for passing ObamaDoggle that was not…and has not been shown…to be a lie.

Maybe someone else can point to one.

There will be fewer people without health insurance! …Oh. Wait.

They’re claiming a bit more than 4 million signups. Subtract 20% for non-payment…hmmm. About 6 million got cancellations because their plan was not acceptable…

Never mind. That pretext failed too.

Non payment is probably a lot higher than 20%. If it was only 20% they would make it public. Probably more like 40% or even 50%. Then there are the people who will pay one or two months and stop. And people who signed up then went out and found a better policy somewhere out of the exchange. The possibilities and probabilites for a meltdown are endless. Not giving out numbers is always a red flag for failure.

So we could find out what was in it?

NOT a good selling point for me, anyhow.

I KNEW what was in it WAY before it was passed.

Not in the minutia…but a steaming pile of crap is recognizable from low Earth orbit.

(And if you’ve never been down wind of an old fashioned pig sty, don’t go there. Unless you really need your sinuses cleaned.)

Yea, me to, because unlike 90% of congress I actually read it, actually I read both versions. At least they didn’t get the version that said if you didn’t follow the Obamacare laws they could cart you off to jail.

One of the things that Obama is finding in it is the loss of the Senate. LOL,

The AFFORDABLE Care Act. Just drop cable television and cell phones and you poor people can have insurance just like the rich people. At least that what obama seems to have told his base.

On a $36,000 annual income, the requirement to buy the broad policy rather than something a little more economical — say, hospitalization coverage combined with an HSA, a strategy which is now all but illegal — makes it impossible to comply. Pshaw, Obama replied. Why, all those low-income folks need to do is stop spending money on luxuries like cable television and cell phones!

[…] As a member of Team Insurrection, it’s my pleasure to highlight this… […]