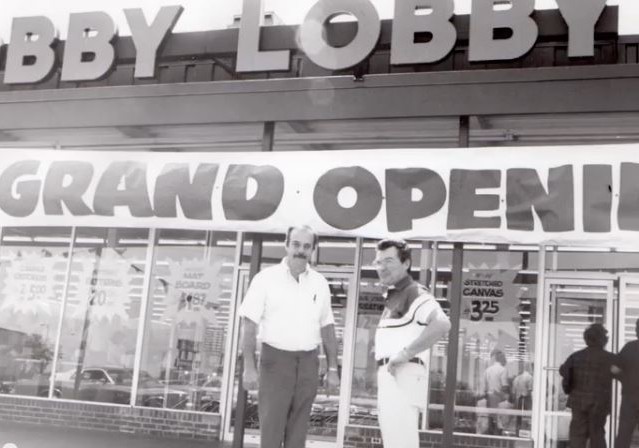 You may have heard about the upcoming Supreme Court case of Sebellius v. Hobby Lobby Stores, Inc.

These principles were put to the test when the federal government mandated that the Greens and their family businesses provide four specific potentially life-terminating drugs and devices through their employee health plan in conflict with their deeply held religious convictions. While the Green family has no moral objection to providing 16 of the 20 FDA-approved drugs and devices that are part of the federal mandate, providing drugs or devices that have the potential to terminate a life conflicts with their faith.

Accordingly, the Greens and their family businesses filed suit in September 2012 to defend their right to religious freedom under the Constitution and federal law. Throughout, the Greens have been assisted and represented in the legal case by the Becket Fund for Religious Liberty, a non-profit, public-interest legal and educational institute with a mission to protect the free expression of all faiths.

The case is scheduled to be decided by the Supreme Court by the end of the June term. Apart from the legal work being done on Hobby Lobby’s behalf, the company has also engaged in a fairly strong public relations campaign.

Hobby Lobby also appears to be engaging in a very active Twitter campaign to help control the narrative — to the extent possible — about their impending case.

The account is linked to a website that gives a thorough overview of the Supreme Court case. It also does a good job showing precisely why the Green family is objecting to the government’s mandate to provide certain types of abortion inducing drugs and devices. The website makes clear that the Green family does not object to its employees purchasing these drugs on their own. Rather, the religious objection is a result of the mandate requiring them to provide them.

Beyond linking to a more “passive” website, the account itself regularly engages with Twitter users about their case, defending their position to the public on a micro-level. The account has also become a place where people agreeing with Hobby Lobby’s legal claims can come to voice their support.

It’s a strategy I’ve not before seen from a business facing such a high profile legal challenge, but its novelty doesn’t mean it’s not working. In fact, the account has grown fairly rapidly, amassing just under 10,000 followers in its first few months. Among those followers are Senator Ted Cruz, Michelle Malkin, and S.E. Cupp, to name a few.

We will keep you updated on the case as it makes its way to the Court. For continuous updates on this crucial religious liberty case, you can follow the Hobby Lobby Case Twitter account here.

Great video that concisely lays out the Green family’s position, but what a damned shame that producing such a video would even be necessary.

We have lost our way, and I cannot be certain that God even wants us back.

This will be a landmark case and decision either way it goes.

If the federal government can force us to abandon our religious beliefs, there is little point in the 1st Amendment or any of the others.

Where I live, the nearest Michael’s and the nearest Hobby Lobby are about the same number of miles away.

From the beginning in this kerfuffle, I have made the conscious choice to go to Hobby Lobby rather than Michael’s. They’re both good stores, but I feel that Hobby Lobby is the one which needs my support right now. There’s an elderly neighbor I take out to do errands on Thursdays and she’s a big crafts buff. She feels the same way.

I do support anything Hobby Lobby does to get and keep their principled position out in front of the public. I think that once people are aware of it, even the relatively “non-political” people out there who have sympathy for their cause will make an effort to support them.