A viable option for the over-educated, under-employed, starving faculty-wannabe masses.

Anne Helen Petersen announced that she is leaving academia to join Buzzfeed. 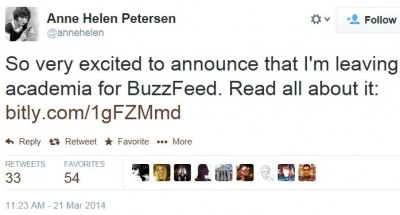 Who is Anne Helen Petersen?

Someone who holds a Ph.D in 2011 from UT-Austin in Media Studies, and teaches Feminist Media Studies, among other things.  Here’s her Whitman College faculty description:

Anne Helen Petersen received her Ph.D. from the University of Texas in Austin, Texas, where she wrote her dissertation on the industrial history of celebrity gossip and spent a lot of time eating breakfast tacos.  At Whitman, she teaches classes in television, stardom, feminist media studies, and theory.  She has published articles in the Journal of Film and Video, Television & New Media, Feminist Media Studies, Celebrity Studies, and Film & History, authored several book chapters, and writes a regular column on classic Hollywood for The Hairpin.  Her first book, Scandals of Classic Hollywood, is forthcoming from Plume/Penguin in 2014.

You may find her blog, “Celebrity Gossip, Academic Style,” at annehelenpetersen.com.

Why is Petersen joining Buzzfeed?  Here’s a portion of an interview announcing the move (emphasis added):

I’ve known for some time that my work, and the sort of audience I love writing for, is not a very good fit for academia, but I thought that I could wedge/force/hipcheck my way into a position that would reconcile the type of work that I wanted to do with the teaching that I love. But as a friend of mine said amidst her time on the market, “academia is drunk”—not belligerent or irresponsible so much single-sightedly focused on things that may or may not ultimately matter.

In other words, no one wanted to hire me! I want to be super explicit about that because I think people will assume that because of all the writing I do, both on and off the internet, that I somehow had some cornucopia of choices and was like “show me the money.” OH MAN I WISH. I get so much satisfaction from teaching, but there was no way to keep doing so—and continue the writing I find fulfilling—and make a sustainable salary. BuzzFeed gives me the platform and support to do the type of writing (and reach the type of audiences) that I love, but can also provide me with a living wage….

Oh I was, but “fully funded” is a myth, especially at state schools, even “state Ivies” like the University of Texas. You have a salary, but that salary just about pays your rent, and then you get nickeled-and-dimed for all sorts of fees, insurance, buying food that’s not rice, and somehow surviving the summer, when you’re not getting paid but are expected to do scholarship and research. DON’T GO TO GRAD SCHOOL KIDS….

The system is broken. There’s no other way to put it. There are too many PhDs—which the schools need, because they’re such incredibly cheap labor—and very, very few jobs.

I don’t blame Petersen at all, or mock her, for joining Buzzfeed.  She’s making a logical decision both financially and in terms of telling her message to more than a handful of people.  And Buzzfeed likely is getting someone who will be a good fit.

In the meantime, Legal Insurrection is interested in hiring Ph.D’s in Conservative Agitation Studies.

Allow me a prediction …

Dr Ray Stantz: Personally, I liked the university. They gave us money and facilities, we didn’t have to produce anything! You’ve never been out of college! You don’t know what it’s like out there! I’ve *worked* in the private sector. They expect *results*.

Well, when the rubber meets the road, she now recognizes capitalism.

I wonder if a Feminist Media Studies PhD recognizes the phallic form of a French fry and the mere question about “super sizing” that phallic French Fry has sexist connotations to the nuanced and culturally aware feminist.

“the phallic form of a French fry ”

How to Obtain a PhD in Alternative Minimum Wage Hikes:

“There is a force in the universe that makes things happen. All you have to do is get in touch with it. Stop thinking. Let things happen and be the…”job. See the job, be the job, Anne.

If you can’t mock someone who teaches Feminist Media Studies, then can you mock anybody? I am afraid you may be losing your edge. Very afraid.

Cat Blogging, at Legal*Insurrection, by the professor himself? I never thought I would see the day!

(As a cat owner, I think I recognize the expression on that cat’s face — it’s getting ready to barf. It must be a conservative cat if the mention of Buzzfeed produces that response.)

I can’t wait to read her first piece:

Reality hasn’t fully bitten her yet. When it does, she’ll realize and admit that her PhD is totally worthless. She’s got a PhD in celebrity gossip. She wanted to teach what Cindy Adams does, but only about women. Totally bogus. I’m looking forward to reading her paper on Lindsay Lohan and Her List Hollywood Bangers.

Isn’t it cause for concern that another Leftist Loon gets to commandeer a popular social media channel?