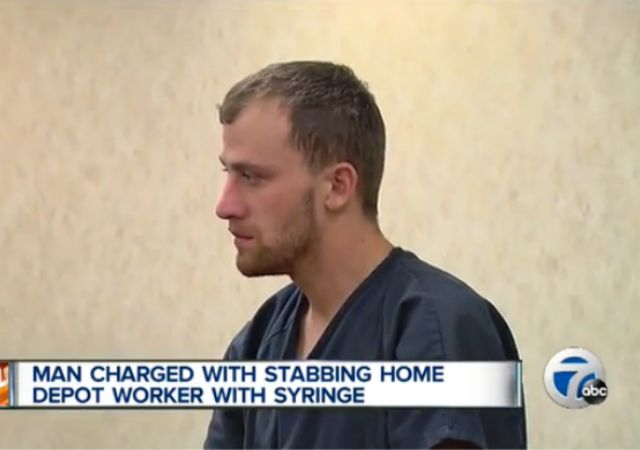 Police in Roseville, Michigan say a man suspected of trying to steal a drill from a local Home Depot repeatedly stabbed a store guard with a dirty syringe Monday until a customer with a concealed firearm license intervened and ordered the man to stop, according to an Associated Press report (via Michigan’s FOX 32 News).

26 year old Joshua J. Silva was arrested after the incident Monday, which began in the store parking lot. [Video news report after the jump].

The Detroit Free Press has the details:

Roseville Police Chief James Berlin said that Silva claimed he is addicted to heroin, but it is not believed he was on the drug at the time of the assault.

Berlin said Silva began to fight with store loss prevention officers in the parking lot when they tried to apprehend him for stuffing a $179 battery-powered drill under his coat. Silva pulled a concealed syringe from his jacket and used it as a weapon, swinging it around in a slashing motion, police said.

They said he stabbed one of the officers several times with the contaminated needle. Berlin said the victim had more than five puncture wounds on the top of his hand.

A customer with a concealed pistol license saw the fight, pulled out his handgun and told Silva to drop the syringe and get on the ground. Silva stopped fighting and sat down in the parking lot, police said, but jumped up and ran when he heard approaching police sirens. The loss prevention officers allowed him to run and police officers arrested him without further incident.

The citizen told police he got involved because the suspect was so violent and appeared to “be getting the best of” the loss prevention officers. He said he feared if he didn’t get involved, the suspect was going to kill one of the store officers, police said.

The Detroit Free Press reports that the injured loss prevention officer was treated at a local hospital and did not wish to speak to the media.  The customer who intervened wishes to remain anonymous and also did not want to speak to media.

Silva was arraigned Tuesday on second-degree retail fraud and assault with intent to do great bodily harm, and was held on $25,000 bond.

The Michigan State Police crime lab has received the evidence from the incident and are currently testing the syringe(s) for any signs of communicable disease, according to The Detroit News.

7 Action News / WXYZ Detroit also reports, “Police say they will now put in for an award for that legally armed citizen who stepped in to help.”

He said he feared if he didn’t get involved, the suspect was going to kill one of the store officers, police said.

So glad you posted this-

This story isn’t about what you may think it is. It’s not about how guns protect–we get that.

It’s about the heroine epidemic that is sweeping middle America….

I was at this Home Depot last Sunday. Over a year ago, my car insurance agent was found dead in her home of a heroine overdose. The police kept it from the public for a year.

I’ve been asking myself how this drug, a drug that was essentially eradicated, is now not only available, but is flooding the drug market.

No, the story here isn’t about guns. It’s about the poppy fields in Afghanistan…and our Commander in Chief.

A cop friend says that heroin in now cheaper than prescription drugs to which all the youngsters are now so accustomed to using.

Begs the question-How is it getting in at such high quantities?

Possibly it’s the economy. When the economy is bad for a long time, some people turn to drinking and drugs.

“It’s about the heroine epidemic that is sweeping middle America….”

Yes, there are entirely too many females running around acting heroic ….

Spandex reserves are reaching critical levels. We will soon have a spandex gap!

This is a bad thing, supposedly.

“…meanwhile in gun-free Chicago and New York, it was crime as usual, as well-armed criminals continued to enjoy unprecedented levels of economic opportunity.”

Had this happened in Chicago, the man who intervened would have been charged with aggravated assault. You can count on that son, the Chicago machine is itching to find a CCW licensee they can get jammed up.

The customer was right but why did he/she wait until someone was punctured five times? The customer should have pulled the gun the instant the syringe came out. If the needle was infected with something lethal, then the stabbed guy could die.

We don’t know any of the details. It may be the customer was a going to/from their car a few rows away and saw the fighting motions, but not the syringe. Unless it was one of the 8 foot long, 12 gauge syringes the doctors poked me with when I was little, it would have been hard to see from any distance.

The customer didn’t have to get involved at ALL. He does not deserve any bitching about ‘not doing it faster’.

Seriously, you’re going to criticize the good Samaritan, in this instance? Do you know how quickly an assailant can instigate a fight and can strike a victim with a weapon? In the flash of an eye; in a second. Unless the good Samaritan had super-human reflexes, no one could act that quickly. Furthermore, you don’t know the position and vantage point of the good Samaritan. Lastly, as others have pointed out, a syringe is a tiny object; not exactly machete-sized.

So, really — idle speculation and attempts to ponder why the rescuer didn’t intervene “faster” are as unfair as they are utterly foolish.

No, no, no. This is all wrong. Troopers are your best protection! It even says so on bumper stickers on cars everywhere in my state! /sarcasm

Congrats to the legally armed citizen. Glad to see the cops acknowledged his essential role in the matter, rather than make some cautionary comment about the dangers of blah blah blah.

This business about “not doing it faster” leads me to question if there may be some hesitation on the part of the average citizen with a carry permit as it relates to a concern for the the legal ramifications of their actions. It may be time to promote legislation that offers protections both civil and criminal for those persons acting in good faith to defend the life of other citizens.

Legislation to protect good Samaritans will have to wait until after the November elections when, hopefully, all the egg-sucking Democrats get kicked out of the Senate. Otherwise, it will just get left sitting on Harry Reid’s desk with all the other bills that have came out of the House in the past 5 or so years!!

Legal ramifications? Practical hazards, as well, a major one being the problem of figuring out who’s who and just what is going on. Mr Average Passer-By wouldn’t routinely have the information needed to justify forcible intervention.

The last time I personally witnessed three average-looking types manhandling (albeit mildly) a fourth average-looking type, it turned out to be three plainclothes gendarmes pinching a suspect. Lacking any knowledge of the events leading up to that little tableau, there was no way that anyone would be able to guess, just by looking, at what was going on.

Of course if a non-police issue weapon, such as a syringe, was visibly involved, that could be a useful clue. And when the handcuffs appear, that’s usually a reliable indicator of who’s who.

You know, I’m okay with a citizen (or anyone, really) hesitating before deploying lethal force upon another.

Florida had protections for people shooting in self defense and they didn’t stop the persecution of Zimmerman. Tyrant Obama needed to scare blacks into supporting him in 2012 and this incident was the prefect vehicle for his lying campaign of deceit.

The real story IMHO is how Detroit has changed. The new police chief has completely reversed the story on guns there, and the media lapdogs are actually going along with it. So now you have free and armed citizens stopping crimes, criminals are running scared and getting caught and occasionally shot.

Now if Detroit would just declare an open season on the dog packs running loose, more problems would be solved by the private sector. And I’m talking about real packs of 30+ dogs acting as a hunting unit.