“We have to stop letting the media define who we are, and what we stand for.” 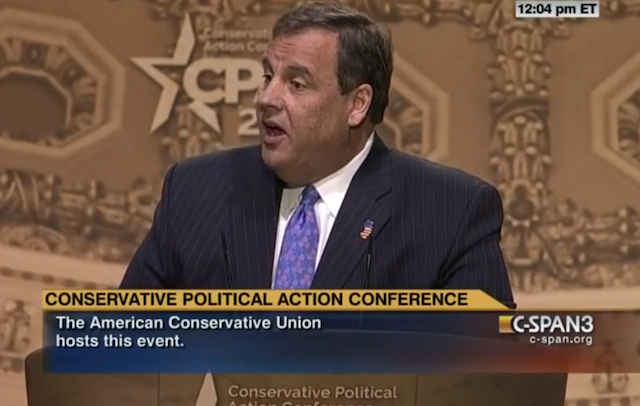 The late great Andrew Breitbart was well known for his laser like focus on media and how it relates to society’s perception of political issues.

He was fond of saying that, “the media is everything.”

It seems New Jersey Governor Chris Christie listened to what Breitbart was saying all those years, and he devoted some of his speech at CPAC this afternoon to reinforcing Breitbart’s “war on the Democrat media complex.”

Christie, whose name is increasingly being said in tandem with the number, “2016,” spoke for about 15 minutes on a range of issues. Among other things, he talked about his record reforming the public sector in New Jersey, as well as gave credit to a number of other Republican governors for the recent strides they’ve been making in their respective states.

It was his comments on the bias inherent in much of the media, however, that caused me — and likely quite a few others in the audience as well — to remember Breitbart’s call to arms.

“We have to stop letting the media define who we are, and what we stand for… The fact is we have to take these guys on directly” Christie told the audience.

“And you know I’m shy and retiring, and I don’t like to speak my mind…” quipped the Governor, known by many to have an unusually blunt personality for today’s politics. “But what we need to start saying is that we’re not going to put up any longer with them defining who we are. The way we have to define ourselves is to say what we’re for.”

We need to talk about the fact that we are for a free market society that allows your effort and ingenuity to determine your success, not the cold hard hand of government determining winners and losers, which is what this administration has been all about.

Christie closed by encouraging all attendees to “come out of this conference resolved to win elections.”

Said Christie, “we don’t get to govern if we don’t win.”

I don’t trust him.

oh i trust him completely.

he, being a typical RINO, will sell out conservative principles, conservative candidates, and do anything else he needs to do to advance his personal career.

i’ll never support or vote for this slimy bastage, as i’m never again supporting the lesser of two evils.

I prefer to select the most freedom loving, constitutionally-minded candidate available. I guess living here in NYC I will always have to chose the “lesser of two evils.”

You could always move to America. Just sayin….

Well. I like living in NYC. I’ve lived in NH and Alaska. I love rural life but I always come back here. I love it.

Hate the politics, the excessive taxation, the crazy regulations. We’ll see what deBlasio does. He may be the last straw. What might save NYC is that deBlasio is another peronista – he’s corrupt and will do what he needs to stay in power. He can raise taxes only so much (even libs are at their limit) and if crime goes up – he’s toast, and he knows it.

Red Skelton was a very interesting and intelligent man.

He told the story of having a Japanese garden at his home. When someone did something that deeply wronged him, he would hold a “funeral ceremony” in his garden, and that would be that.

I buried Christie a long time ago.

Windbag, eh? Names really do have meaning, don’t they?

Who do you suggest is electable – Eric Holder, Michelle Obama, Colin Powell. Three fine black specimens of the American culture; one is even a ‘war hero’ and a RINO to boot! BUT, all three are electable and would have an instant built-in base of 12% of the population. If the GOP could only find a
1] BLACK
2] FEMALE
3] MILITARY WAR HERO
4] HOMOSEXUAL
5] RINO
6] ABORTION DOCTOR
7] EX-JOURNALIST
8] who loved to spend other peoples money and
9] hated conservative white people

THEN the Republicans could have their man sitting in the White House for another 100 years….or the country dissolved into utter chaos.

I agree with both comments above.

That’s rich coming from a media whore like Christie.

So, Governor Christie, if you don’t get the nomination in 2016, which Democrat will you hug and sing the praises of then?

or was this a trick question?

Ah, Christie’s awakening came just recently, with Bridgegate. He had no problem when the media tried to define Gov. Palin contrary to her record. In factual, he actually joined in the sneering, and publicly, too. Now that he has experienced a mere jot of what she’s been put through, now that he wants to restore his political ambitions, he comes to the Conservative community repeating one of our icons in the service of himself.

As for what the LSM did in re Bridgegate, that what just what Democrats with bylines do to people with an R after their name, no matter how faint the color of the R.

So, quit yer bitchin’ and shovel off!

Nope. I will not vote for him. “Electability” or not. I’ll sit it out first.

you can tell he’s lying: his lips are moving. the Jersey Whale went belly up with me years ago, and there is nothing he could say or do that would ever make me trust him, let alone vote for him for anything, let alone President.

better an out of the closet lieberal than yet another RINO traitor reaching across the aisle.

if the RNC shoves him down our throat for 2016, they better do so knowing they’re going to lose.

You do realize there are things called primaries and caucuses, don’t you? That’s where the candidate is eventually chosen — by Republican voters (or Democrats causing mischief in open primaries), not by the RNC.

“better an out of the closet lieberal than yet another RINO traitor reaching across the aisle.” — So an Obama presidency is better than, say, a McCain or Christie presidency? Really? That is so obviously nutty it hardly needs a refutation.

In 2008 there were conservatives saying it was better to have Obama than McCain as president because it would inevitably cause such a backlash that we were guaranteed to get a Reagan-like president in 2012. How’d that work out?

Every election offers a worst option and a not-so-bad option. Leftists understand that the most urgent necessity is stopping the worst option (in their view). Too many conservatives are much less savvy and less realistic. They stamp their little feet and whine about the candidate who won the primary, and they imagine they’re sending a message by letting the worst option win. And then they wonder why Republicans conclude that the party needs to become more centrist!

You reveal the hudspah of the establishment GOP and other anti-conservative Republicans when you say:

“Every election offers a worst option and a not-so-bad option.”

.. suggesting Christie is not so bad, without understanding that your definitions of worst and not-so-bad are not the standard definitions we all must go by. Conservatives, like moderates and liberals – and RINOs – have their own meter for this determination and it is clear that Christie doesn’t measure up for most of them.

He has a point but unfortunately, he’s not in a position to be the one making it as he’s being portrayed as a blowhard bully and perhaps rightly so.

how he’s been portrayed doesn’t hold a candle to how he has acted in office & in public.

he’s a useless RINO, who needs a nice big mug of STFU and a one way ticket back to Jersey and the obscurity he has so richly earned for himself.

if he wants to feel special, he can call his butt buddy Obumbles.

As Mark Levin said, “So what is it you stand for, Chris Fat Boy Christie*?” Then he lists the litany of liberal lunacy he has worked while governor of NJ, which are all down-the-line left-aligned.

Sadly, I must admit – his point is correct. But as jakee308 says, he is not the one who should be making it!

Why was Christie invited to a meeting of the Conservative Political Action Committee? Perhaps he likes to pretend that he knows what conservatives are and what they need from their elected representatives but liberals simply have no such concepts to draw upon.

Too little, too late. He showed his true colors with the Obama lovefest.

“We have to stop letting the media define who we are, and what we stand for.”

Great sentiment, one which he completely disregarded when he thought cozying up to the POS and blowing off Mitt were going to help him during Superstorm Sandy.
,

Whether one likes him or not, this is smart. His one path out of purgatory is to make the media the issue and take them on. No one else in this pathetic party will do it (I haven’t heard a single Republican invoke either Breitbart or his message in two years). And the base craves this conflict, as they know the score far better than the establishment does. But how sad and ironic that the job falls to Christie, a RINO opportunist.

The GOP leadership looks at Breitbart and the Tea Party as useful idiots to be used, then marginalized or abandoned.