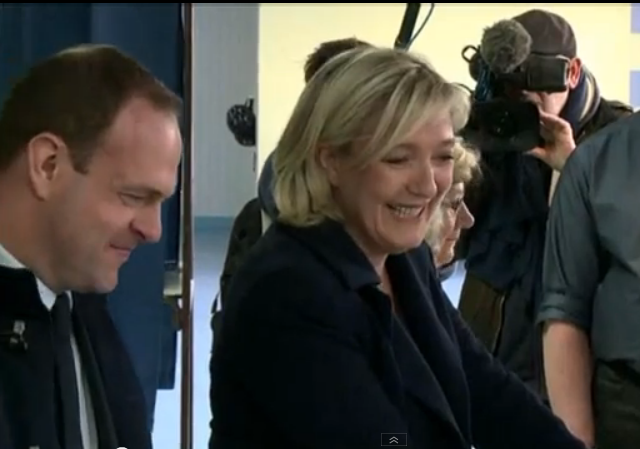 Local elections in France just took a dramatic turn to the right:

The elections in thousands of constituencies across France were the first nationwide voter test for Hollande, who came to power in May 2012 and has seen his popularity slump to record lows for failing to rein in unemployment.

A second round of voting is due next Sunday but FN leader Marine Le Pen, who has softened the party’s image since taking over from her father Jean-Marie Le Pen in 2011, said advances made in the first round already marked a major breakthrough.

Yes, it does look like the French are already regretting their choice for Hollande.

But what is most interesting is not that the socialist party lost, rather it is that a third party made such a strong showing amid a great deal of voter apathy:

“The Front National has arrived as a major independent force – a political force both at national and local level,” Le Pen told French television.

Pollsters say the FN will be in a position to take control of half a dozen towns after next Sunday’s run-off vote.

After the first results came in showing a surge in support for the FN, the Socialist prime minister Jean-Marc Ayrault called on “all democratic forces” to close ranks to keep the FN out.

“Wherever the FN is in a position to win the second round, all who support democracy and the republic have a duty to prevent them,” Ayrault said in a television address.

The first exit polls suggested a historical level of abstention among voters hovering around 34%.

While it looks like Le Pen’s approach to mainstreaming her controversial party is starting to make an impact, she still has a long way to go to meet her goal of contending with Hollande for the presidency in 2017:

But while Sunday’s vote was undoubtedly a big step forward for the party, the FN is a long way from being a national force at local and regional levels. It only contested just under 600 municipalities out of the total of near 37,000. Until Sunday night, it had zero mayors, compared with 750 for the Communist party. Its share of the total vote was just 4.65 per cent (albeit almost five times its 2008 score).

…Ms Le Pen’s strategy, however, is to “build from the bottom”, unlike her father who laid little emphasis on local elections, says Prof Shields. The municipal vote is an important step to establishing a local base that will help her with her future campaigns.

Her aim is to challenge the UMP [France’s center-right party], itself hobbled by internal leadership battles, as the champion of the right. Her ideal scenario is to knock out the UMP in the first round of the 2017 election, leaving her facing Mr Hollande, currently the most unpopular postwar president.

It looks like Hollande is going to take a cue from the Obama Administration’s handling of its 2010 electoral spanking: He’s going to double down.

President Francois Hollande’s government will stick to planned economic reforms and spending cuts despite being punished in local elections where the anti-immigrant National Front (FN) made gains, the French finance minister said on Monday.

With the crisis in the eastern portion of the continent, it will be interesting to see what the impact of these election results are on France’s role in European matters.

The French have figured out that if you keep letting a zillion poor, uneducated immigrants pour into your country, it keeps wages low, social safety-net costs high and will eventually destroy those things that made France what it is.

I wonder if the GOP and US Chamber of Commerce are watching these European election results? Doubtful. But the day the NY Times and WaPo editorialize against immigration reform they will wake up…which is to say they won’t ever wake up.

Well, let’s see if the election victory of the LePen crowd will bring to halt Islamic macroaggressions against French Jews, their assertion of the islamicization of public spaces via really annoying “prayer” acts which are really political gestures of Islamic supremacy.

Mon Dieu! I think I see why zee French are turning anti-immigrant…

That’s bullshit. A person has the right to dispose of his assets any way he damn well likes, and that includes following religious law, whether Moslem, Jewish, or Xian. The free exercise of religion is guaranteed in the US constitution, and is also long-entrenched in UK law. Jews in the USA and the UK have been writing contracts and wills in compliance with Jewish law, and bringing their disputes to religious courts, for centuries, and nobody has ever suggested a problem with it. Moslems have been doing the same for decades, and again no court has ever had a problem with it. To restrict their right to do so would fly in the face of everything a free society stands for.

The Law Society is a professional organisation that exists to help its members; if there’s a demand for a certain type of contract, the Society will try to educate its members in how to provide it.

So take your totalitarian, racist, antisemitic bullshit and shove it up your bum.

English law allows people to leave their property as they choose, but their will has to follow English law. If Sharia law violates English law it shouldn’t be allowed.

Although both the European and the American press routinely conflate the two, the Left-Right schism in Europe is quite different from that in the US.

In the US the Left is basically socialist, of one variant or another. The Right is antisocialist (no, not antisocial).

In Europe, where they’re all socialists of one or another sort (excepting looney fringes of monarchists and a few genuine anarchists), the Left consists of Internationalists, and the Right is made up of Nationalists.

So, we can expect the French Right to be opposed to any policy of surrender to the Islamic hordes – and to be none too wild about uncontrolled immigration of Gypsies or Polish plumbers, either – but to be as useless as the French Left when it comes to the economy or the monotonic growth of the bureaucratic state.