“If you lose the Senate, turn out the lights because the party’s over” 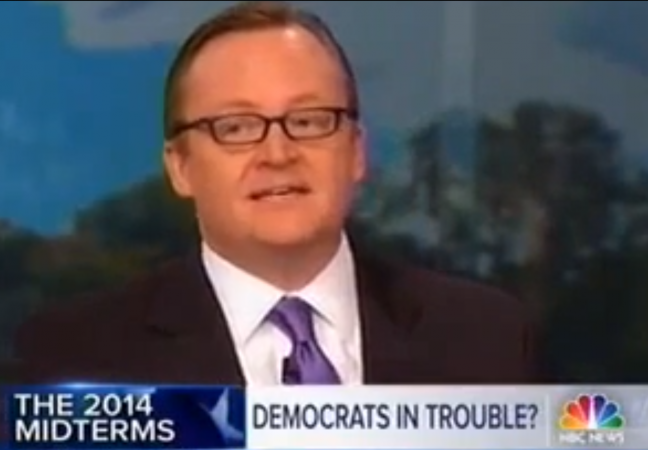 Former Press Secretary to President Obama, Robert Gibbs, appeared on Meet The Press with David Gregory Sunday morning. Among the topics discussed were the 2014 midterm elections.

When asked about the Democrats’ prospects, Gibbs candidly noted the results this November could be potentially devastating.

Over the last few days, Republican observers and pundits have pointed to Republican David Jolly’s recent surprise victory in the Fl-13 special election as a taste of what is to come this November. Gibbs, however, is one of the more  notable Democrats to come out echoing Republican sentiments about the 2014 electoral outlook.

Gibbs: If you lose the Senate turn out the lights because the party’s over.

Gregory: Is the Senate in danger?

Gibbs: Definitely. Absolutely… There’s no doubt. [Republicans have] got to pick up 6 seats, which is not a small number, but what gives them a huge advantage obviously is the states that they’re in. As Israel mentioned, in Louisiana, in North Carolina, in Montana, places where the President didn’t do well.

It is, of course, important to note that we are still over 6 months away from the ballot box and there are a million things that could happen that could shift the national sentiment in favor of the Democrats.

That said, Democrats have an awfully steep uphill climb ahead of them facing a motivated conservative electorate, and having to lay claim to an increasingly unpopular President, and his equally unpopular signature legislation.

Could 2014 be another historic Republican midterm rout of Democrats, like 2010 was?

Only time will tell, but as of now it is certainly a genuine possibility.

I can see the Republicans taking the Senate and House… and then losing everything in 2016 out of pure cowardice and stupidity.

They have turned it into an art form.

Wait, are you predicting a million more Obamacare delays?

““If you lose the Senate, turn out the lights because the party’s over”

Let me be the first to offer him a flashlight. With no batteries. And a burnt out bulb. With no spare.

… in a room with marbles all over the floor.

Don’t trust Gibbsie. He is a lying Alinsky-ite. He would not be saying what he is if he didn’t already have strategies in the works. Both he and Axelrod are cooking up something, probably along with Anita Dunn and more that are under the RADAR.

This smells. With a line like that, he’s letting everyone know they are cooking up something. Big.

I totally agree. He’s played this game before.

Gibbs is positioning himself to be the “see, they shoulda listened to ME” guy for Democrats. He’s not all that smart.

I call horse-hockey on this. Name ten thousand! That’s only 1% of your claim.

I thought it was Drew Carey .

“Meet the new boss. Same as the old boss.”

It is interesting to note David Gregorys choice of words, “is the Senate in danger”, not,”are the Dems in danger of losing the Senate”. Words mean things. But Gibbs is right, if the Tea Party doesn’t do well this election, the party is over in a much bigger sense.

Depends. As has been stated by others here, the Tea Party is an idea, not a political party. It does not have an organization per se, but is comprised of multiple independent groups throughout the country. Those ideas will not magically disappear if their candidate does not prevail. Some will be victorious and I am betting on Brannon in NC to be one of those. I think Mia Love is almost a certainty and Bongino has a good chance. We can only hope these candidates remain independent and don’t become influenced by those already entrenched in the system that now exists.

Whatever. The first thing Karl Rove and other consultants did after the big Florida win was to downplay the impact Obamacare had in that specific race and they put the word out that Republicans ought not make it a big focus for the November elections. It appears the Obamacare lobbyists have corrupted the Republicans.

Further evidence is that when Mitch McConnell recently appeared on Fox he said something along the lines of, “if the American people will make me Senate Majority Leader, I’ll repeal the individual mandate”. He did not say he’d work to repeal the entire law, but that he’ll repeal the individual mandate. That seems to be a moot point anyway. As many changes as Obama has unilaterally made to the law, I suspect he’ll unilaterally suspend the mandate after the March 31 deadline to try to improve chance Democrats hold the Senate.

What’s the battle cry? Vote for us because we’ve decided to work with Demcorats to fix the mess that Democrats created?

That A$$ had the gall to say that–he was on Greta Van S’s when she ask his what the Rep. could do to stop Ocare–MAKE HIS MAJORITY LEADER?!? I don’t think so!! We want him and the rest of the RINOs GONE!!! And old Mitchy just might be after the damn dam his state got attached to the bill that got the gov. shut down awhile back—can’t think of the name of it now. It’s the PROGRESSIVES WHO NEED TO GO–IN BOTH PARTIES!!
OLD KILLARY SAID IN 08 THAT SHE WAS ONE! WELL DUH!!

Yeah…There could be a hurricane/snow storm and some idiot RINO governor could go play kissy face with Obama all over national TV for performing the only act of competency of his entire presidency.