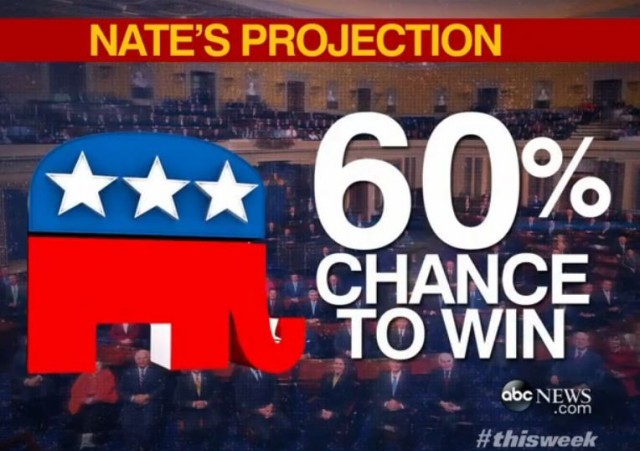 Remember in 2012 when Republicans hated Nate Silver because he was predicting an Obama victory based on polling averages.

Unskew! The Polls was the Republican mantra.

Via Noah Rothman at Mediaite:

FiveThirtyEight analyst Nate Silver won copious Democratic praise in 2012 after he predicted that President Barack Obama would win reelection. He never wavered from that prediction, in spite of some bumps for the president along the campaign trail, and Silver was vindicated when it turned out that he had correctly predicted the election results in 49 of 50 states. Times have changed, however, as Silver is on the receiving end of Democratic ire this year.

Over the weekend, Silver said that the GOP has a 60 percent chance of retaking the upper chamber of Congress based on early polling results. In response, Democratic Senatorial Campaign Committee political director Guy Cecil released a 1,000-word memo remarking on how Silver was actually wrong in 2012 and he will be wrong again in 2014.

“In fact, in August of 2012 Silver forecasted a 61 percent likelihood that Republicans would pick up enough seats to claim the majority,” Cecil wrote. “Three months later Democrats went on to win 55 seats.”…

Silver’s latest analysis is not inconsistent with other political handicappers. Both the Cook Political Report and the Rothenberg Political Report have acknowledged that Democrats’ chances of maintaining their Senate majority became harder in recent weeks as the president’s job approval rating has slumped and the Affordable Care Act acts as a drag on the Democratic political brand.

I was never overly impressed with Silver — he basically takes polling averages. That may be a very good methodology, but it’s hardly unique or brilliant, except when others ignore the averages.

But one thing I’ll try never to scream again is what Demcrats are doing now: Unskew!

Republican activists were pretty floored that the pollster naysayers were right on the money, but that’s because of how turnout worked out.

Yeah, those long-dead Dem voters got to vote scores of times – all over the country!

Most Pollsters did not realize that 3 million white people would stay home in 2012. They did not want to vote for Obama but could not bring themselves to vote against a black president.

I wonder if Silver’s model has Obama supporters voting 6 times?

I think Nate knows to factor in those dead Dem votes dozens and scores of times.

Has anyone analyzed the skewed polling and the outcome of 2012 in depth? I know many stayed home and some Dems voted half a dozen times (no harm, no foul according to the DOJ referees), but how could so many be so wrong?

The arguments about skewed polls hinged on the fact that Democrats were predicting essentially a HIGHER Democratic turnout than even 2008.

As it turned out, the polls were correct not because of Democratic turnout, but because of Republican turnout.

If the same amount of Republicans had voted in 2012, Romney would have won easily.

However, Romney couldn’t motivate his base, and refused to hammer Obama on his numerous blatant lies. He thought they were in a ‘nice’ campaign, while Obama and the Democrats descended further into the gutter to slime him than they ever had before.

Unfortunately it worked, and we’re stuck with President Lying Golfer for 3 more years.

The WSJ article’s numbers look persuasive.
Not sure about the prescription for changes, but hey.

Silver has also ruffled the Left’s feathers with his choice of a Global Warming writer.
C’mon Nate, get back on the Plantation! 🙂
http://judithcurry.com/2014/03/20/nate-silvers-538-inconvenient-statistics/

“However, Romney couldn’t motivate his base, …”

This is suppose to be a representative Republic where it’s the responsibility of individuals to see the larger picture, recognized what’s at stake and motivate themselves.

The prospect of Obama getting another four years to wreck the country should be enough motivation for any real conservative or libertarian.

Good point. Many citizens aren’t informed enough to understand how serious the stakes are. Others are informed, but they’ll sit home out of peevishness over a candidate they don’t like enough, or out of highly dubious notions of what sitting out the election will accomplish.

A lot of leftists will vote for a Dem they regard as too conservative because they think it’s urgent to stop the Republicans. They understand that it’s harder to go “forward” by taking a huge step backward first. (That’s why the CPUSA will advise voting for Democrats.)

Too many conservatives imagine that it’s better to take the big step backward on the principle that it will guarantee a huge backlash; or because they think they’re “sending a message” to the GOP to “give us better candidates”; or because they don’t want to sully their pure souls by voting for “the lesser of two evils.”

Guess what? If you won’t vote for the lesser evil, you’re more likely to end up with the greater evil, which may take actions that render the backlash ineffectual — e.g. using the IRS and other agencies to suppress critics, putting stricter limits on FOIA, harassing journalists, attacking voter-integrity measures, flooding the country with new instant Democrats, etc.

I believe that the people that did not vote didn’t because they did not like the republican antics in Florida. I know that all of the delegates we selected in my caucus here in central massachusetts were denied the ability to represent those of us at the caucus that selected them. That certainly soured me and was the reason I refused to vote republican. That being said, I am fully aware who the electoral votes were going to from Massachusetts, so my not voting for the republican made no difference. I did not vote for the democratic ticket either, I voted my conscience, and as usual in Mass, I made no difference again this year.

I was never overly impressed with Silver — he basically takes polling averages. That may be a very good methodology, but it’s hardly unique or brilliant, except when others ignore the averages

There is an old saying: “In the land of the blind, the one-eyed man is king.” The vast majority of the media is ignorant of science (including mathematics), and is ideology-driven rather than fact-driven. You can see it in the media’s religious fervor when they speak of “man-made climate change” (which does not exist, at least on the scale they believe) and the anti-science phrase “settles science” is an effort by journalists to cover up their own ignorance while demanding that their opponents shut up.

In the fever swamp that is our modern media, science is not a discipline which anyone can study and work hard to master. Rather, science is a sacred and royal priesthood that is only for the Chosen Few who do not question the Holy Beliefs. Not surprisingly, the reaction to Silver’s predictions by the left has been one of hysteria and outrage. When the priests don’t tell the faithful what they want to hear, the priests sometimes end up being burned at the stake.

Nate Silver at least tries to prove what he says, rather than state something is true and then demonize those who disagree (the usual way the media operates). In the ideologically blinded land of the media that makes Silver the one-eyed king – even if much of his kingdom is rising up against him.

But Silver’s methods does not make him right or particularly insightful. No matter how good the numbers look now, my gut tells me that the lefty GOP Establishment will still manage to blow it. We’ll see.

Silver has a staff of white males.

It is racist and misogynist even to mention his name.

One cannot find the probability of something by combining polling data. A probability of an event occurring is based on a calculation of knowns. It is not based on extrapolating information from compilations of past events.

Pre-election polls are attempts to mimic elections in advance to get a glimpse of what might happen. These polls can best be seen as sloppy past events of the future event. They are sloppy because they do not require the same action of proactively voting, but instead require answering a question on the phone. The future event in this case is the real election.

It is fine for Silver to take polling averages, as Prof. Jacobson wrote. It is not fine for him to then claim to extrapolate probabilities based on these past events. These “probabilities” are simply lies and nothing else.

[…] he is yesterday laying odds on the Senate via Legal Insurrection, who marvels at the spectacle of Democratic leaders now trying to un-skew the […]