University of North Carolina at Wilmington professor Michael Adams has won his discrimination lawsuit, in a jury verdict rendered today. The judge now will rule on damages.

The Jury Verdict form and Judgment are embedded at the bottom of this post.

Adams was the professor who wrote the viral response to another professor who called Adams an “embarrassment” to higher education.

Dr. Mike Adams, a criminology professor at the University of North Carolina–Wilmington, frequently received accolades from his colleagues after the university hired him as an assistant professor in 1993 and promoted him to associate professor in 1998. At the time he was an atheist, but his conversion to Christianity in 2000 impacted his views on political and social issues. After this, he was subjected to intrusive investigations, baseless accusations, and the denial of promotion to full professor even though his scholarly output surpassed that of almost all of his colleagues. In a lawsuit filed against the university on Adams’ behalf, Alliance Defending Freedom attorneys contended that the university denied Adams a promotion because his nationally syndicated opinion columns espoused religious and political views that ran contrary to the opinions held by university officials. 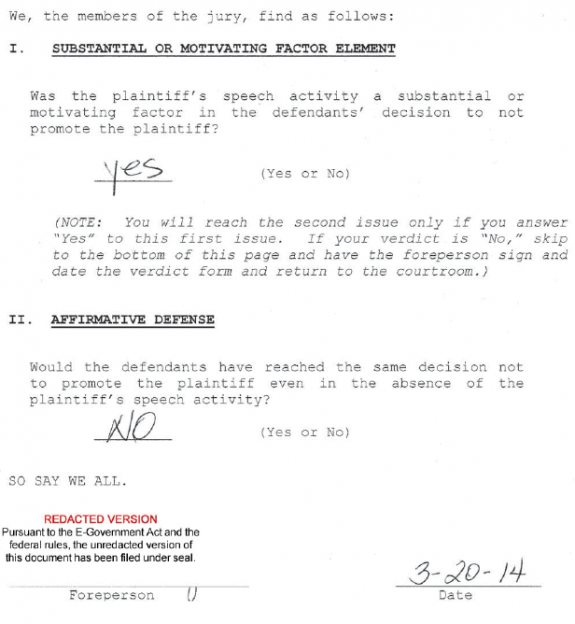 The Judge now will resolve the damages, as set forth in the Judgment:

In response to the verdict, UNC issued the following statement, in part:

“UNCW strongly believes that its faculty properly applied their academic judgment in determining that Dr. Adams’ application did not merit promotion to full professor in 2006 and firmly denies that Dr. Adams’ political or religious viewpoints played any role whatsoever in the decision,” the statement read. “The university was, is, and will continue to be committed to the proposition that faculty are to be evaluated on their merit, regardless of their respective political or religious views or commentary.”

(Hat Tip to reader SB for alerting me to this case.)

Good. Maybe it will put other schools on notice.

“…and firmly denies that Dr. Adams’ political or religious viewpoints played any role whatsoever in the decision,” the statement read. “The university was, is, and will continue to be committed to the proposition that faculty are to be evaluated on their merit,”

Liars. I hope damages are record-breaking. These people need to be dealt a great deal of hurt, where it hurts.

I’ve read Adams’ column at Townhall for years. Entertaining and smart guy. I’m glad he won this. He’s one of those guys who has a knack for making lefties’ blood pressure go through the roof.

I agree. Provocative and entertaining writer. He mocks the Left.

OK, got that out of my system.

I know a gentleman, a former VP of a major US corporation, was on the Board of Trustees for UNCW the last time I spoke to him (about three years ago, if memory serves). He bemoaned the inability to affect the anti-capitalist and leftist faculty. Once tenured, they exercise more influence on the operation of the institution than the Trustees!

This goes on everywhere, all the time, there isn’t room on the dockets for every potential case (and unfortunately most leftists aren’t above disposing of evidence, covering up their actions, or lying to courts, either).

The ONLY solution is to get the government OUT of the higher education business altogether, including student loan subsidies and all direct subsidies. Once students and parents and their bankers are funding the costs, they will come down, and if universities choose to fill up their halls with tenured leftists, they can do so with their endowments.

Only in a perverse distorted marketplace would such suppression of free speech ever be tolerated in universities, of all places, the theoretical bastions and keepers of knowledge and inquiry. And what we have with the last 40 years of federal subsidy and effective control is most certainly a perverse and distorted market.

Well, now that you’ve brought it up – it sure does look like government subsidizing the suppression of free speech with tax dollars. Maybe Professor Jacobson could give his law students credit if they bring a class action civil rights lawsuit against the worst offender.

I know one thing – lawyers everywhere will be perusing this suit to learn what to do when they get clients in similar situations.

Estragon, as a faculty person at a major university, allow me to suggest that the leftist tenured faculty is not the biggest problem a university faces.

The biggest problem are the leftist mid-level and senior-level administrators, who have better job security than any tenured faculty will ever have. You can’t get rid of them because they RUN the university.

You thought the faculty ran the university? Oh, silly, naive you.

No sir Senator, the administrators do. It’s the senior administrators who have captured the university president, provost, chancellor and deans by controlling the flow of information to them, writing the policies and position papers, running HR, running virtually all of the technical side of the university, and (importantly) running the university’s legal affairs office.

It’s not the goofy leftists in the faculty, it’s the hard-core, quiet committed leftist administrators.

^^this^^ My wife taught nursing for years and concurs.

I hope the prof gets $100M, and let it be a lesson to all the libtard bastard academics and their keepers.

So many people saying they hope this hits the university hard in their pocketbooks is baffling to me. You do realize, I hope, that as a taxpayer-funded institution, UNC-Wilmington’s payments will amount to a waste of taxpayer dollars, and will likely result in tuition hikes for every student who attends that school…including the conservative ones.

But YAY! Stick it to the taxpaye…err…the profs! YEAH!

If that is true, then it should be decertified and all its admin fired. Hit the reset button, so to speak.

The taxpayer needs to know what is going on at the university. The NC legislature via the trustees can control university policy. This is a wakeup call. Maybe the university will stop hiring radical kooks.

I mean radical leftist kooks. Should have specified

“The university was, is, and will continue to be committed to the proposition that faculty are to be evaluated on their merit, regardless of their respective political or religious views or commentary.”

Get the obdurate arrogance oozing out of the statement from the university.

Okay, then how many Christians and/or conservatives do they have on the faculty.

With OJ-like focus they continue the hunt for the real free speech suppressors.

Nice to read good news first thing in the morning.

I teach at a university and I’m very careful to keep politics out of my classes — it’s basic engineering and I can’t imagine how politics would be relevant. That being said, what I do politically on my own time is nobody’s business but my own.

Michael Adams: Thank you very much!

Lest anyone get the wrong impression…

No one at my university has ever said anything about my personal political beliefs. But, I’m very glad to see the principle defended and affirmed.

The Chair at a NYC college at which I taught once told me I provided balance in the department. When I consider the Marxists and other assorted Leftists there, she was right.

There was a press report saying UNCW was considering an appeal. Lawyers here, please tell me if I’m wrong, but I believe that barring procedural error the jury’s verdict on the facts will stand. The jury says he was denied promotion because of bias against his beliefs and private speech. I assume the damages will include back pay and benefits for seven years, plus court costs, and UNCW will need to promote him to a full professorship.

Demosthenes.
The same could be said about any lawsuit demanding financial compensation against a government entity. Or, for that matter, a corporation–shareholders get less, customers pay more, employees lose jobs or raises….

It’s a matter of getting somebody’s attention after everything else has failed. Presumably, some of the miscreants will, at the least, not be allowed to do the same thing again without going through a class on hiding onn’s tracks.

Backstory: When Adams hired on at UNC-W (aka “Berkely on the Beach”) he was an avowed atheist, which I’m sure helped in his hiring at a state university. However, in 2000 Adams converted not only to Christianity, but to the more conservative politics that often accompany it. Though they deny it, Adams was being punished as a traitor to the cause.

We need thousands more of these types of lawsuits filed – and WON!