The United Nations General Assembly approved yesterday a proposal to partition Palestine into two states, one Arab and the other Jewish, that are to become fully independent by Oct.1. The vote was 33 to 13 with two abstentions and one delegation, the Siamese, absent….

The vote on partition was taken at 5:35 P. M. Representatives of Iraq, Saudi Arabia, Syria, and Yemen, four of the six Arab member states, announced that they would not be bound by the Assembly’s decision and walked determinedly out of the Assembly Hall at Flushing Meadow. The Egyptian and Lebanese delegates were silent but walked out, too.

The Arab League announced on Wednesday its full backing of a Palestinian refusal to meet Israel’s demand to be recognized as a Jewish state, a condition Jerusalem says it requires for peace.

“We express our total rejection of the call to consider Israel as a Jewish state,” read a statement from the final day of the Arab summit in Kuwait. 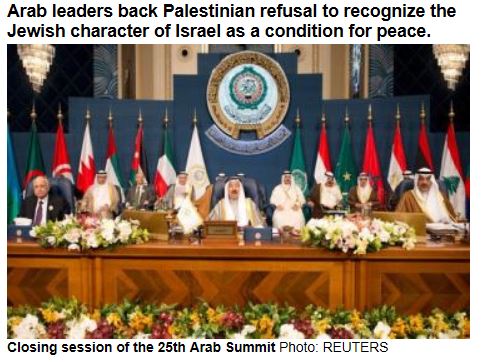 So give them the one finger salute and refuse to grant a single other concession in the name of farce ‘peace’ negotiations until they agree that Israel has the right to exist in some form.

If there is an honest journalist left in the world who Obama would dare sit down with, I hope he asks how you have a “peace process” with people who object to your very existence.

Obama needs to take time out from healing the planet and wake up and smell the coffee.

Ask away, but he’d never give a straight answer. That’s Obama’s standard way to deal with such questions.

This idiot wouldn’t have lasted five seconds under the scrutiny of a true, Free Press.

Think about the absurdity of this whole thing when it’s broken down to its most elemental state.

We demand land and concessions from the government of Israel, a nation whose existence we do not acknowledge.

WTF? Can these people, including Obama and the Usual Suspects at the UN, be that incredibly stupid? Oh, yeah…

The folly of this is Israel even thinking that an implacable enemy, whose Koran and Hadiths say that Jews must be killed, would ever consent to make peace.

Let’s stop fooling ourselves. Peace will never be made with these people. Any document they sign will be a lie. They will smile and then turn around and kill you. They will demand you give them financial assistance then tell their people, in Arabic, of course, that you are paying them jizya (poll tax) so they don’t attack you.

Leave these lying barbarians alone. Eject them from the world community of nations. Deport their peoples back to their lands. Do not trade with them. Do not marry their sons or their daughters. Build a wall around their nations. Let them wallow in the filth found in their books. Let them not live amongst us since they will not make peace; they will not live peaceably with us; and they plain and simply cannot be trusted.

I’m tired of Israel engaging in this known folly.