Wendy Davis drops to 11 pts down in latest poll

Wendy Davis drops to 11 pts down in latest poll

For how long will Dem donors keep pouring money into her campaign? 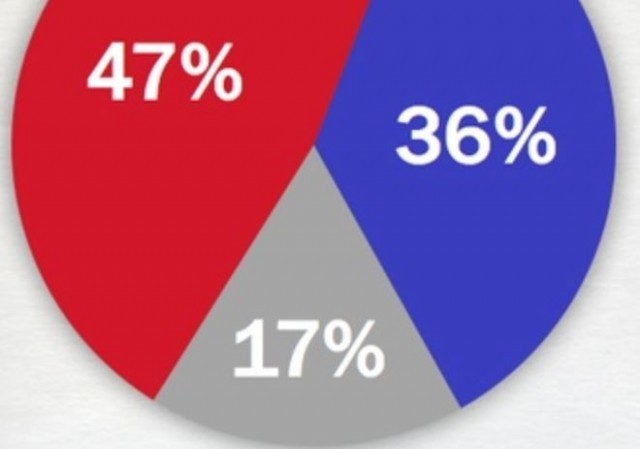 The latest poll from the University of Texas/Texas Tribune shows that Wendy Davis’ 15 minutes of fame may be fading.

After closing the gap to mid-single digits behind Greg Abbott in prior polling, Davis is back down to 11 points behind:

In the governor’s race, Abbott would beat Davis 47 percent to 36 percent in a general election held today, with 17 percent of registered voters saying they have not made up their minds about which candidate to support, according to the poll.

“We’ve been talking since the beginning of this race about whether anything would be different, and we’re not seeing anything that’s different,” said Jim Henson, co-director of the poll and head of the Texas Politics Project at the University of Texas at Austin. “There was some talk about how Davis had done better in our last poll, and that was partially an artifact of her rise in the fall, and we’re seeing something of a reassertion of the normal pattern.”

In the October survey, Davis’ announcement and sudden political celebrity cut the Republican’s lead over her to 6 percentage points. Now, the distance between the two has widened a bit. 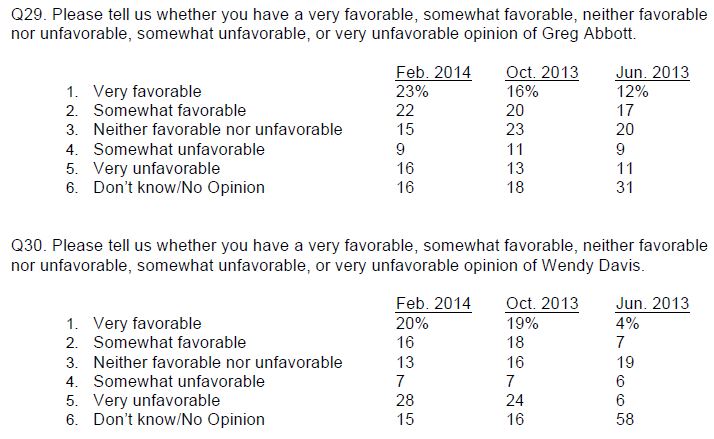 The personal narrative collapse and highly-malleable positions on gun rights and abortion have to have hurt Davis.

Any lower, and the president showing up to campaign for her will be an asset.

Some wag at Hot Air nailed it with this one:

“Obama’s stature has fallen so low that Kenyans are claiming he was born in America.”

Texans just don’t realize the Wendy is a gun-toteing Pro-Lifer.

I don’t know the record of UT/TT polling, but the Trib is a very liberal paper – which is why some were surprised when one of their writers exposed her inconsistent biography.

Judging by recent statewide elections alone, and not being from or particularly familiar with the politics of Texas, I would put the over/under on Abbott at +17%. And if I had to bet, I’d take “over.”

I haven’t lived in Texas for over 10 years, but I seem to recall that Jim Henson, the co-director of the poll was very level-headed without an apparent agenda. He was always straight-forward when discussing political issues and didn’t appear to have any biases. My tendency is to trust these numbers.

If Texas were anything like New Jersey, the answer would be simple:

1) Spend a fortune on attack ads raising Abbott’s negatives.
2) Substitute in a new candidate a couple of weeks before the election, finding a friendly judge to overrule the frivolous objection that it’s illegal to do so.

Liz Warren can claim Texas residency if her tribal lands extended that far down.

Hey, we have lots of Nordic tribal peoples here in Texas…!!!

I imagine Lizzie might be scared to set foot in Texas. What with the Kennedy affair and all.

Just as long as we don’t sit around thinking this thing is in the bag….. OfA isn’t playing for small ball with Battleground Texas and they pulled out what was considered an impossible flip in Colorado. The campaign to keep an eye on is the one we can’t see involving the databasing operation to turn out unknown voters to vote straight ticket. I suspect that the Davis campaign is the false flag and the real ground game is in the smaller races where a heavy straight ticket vote can swing an election. We need an across the board concerted effort to force every Dem in Texas to publicly run away from Davis and Battleground Texas.

and for my bit of snark….. how bad is it when the Tribune which is running 100% support for Davis, still has her 11% down with what is most likely a skewed poll?

We should encourage them to keep right on spending.

Btw, there is a Wendy Davis ad smiling at me from the right hand column of this website right now.

I always think we should click on those and make her campaign cover a bit of the Professor’s bandwidth bills!

Tag her a few times… every guy at Harvard did.

This is an off year election and the usual suspects won’t be showing up in large numbers especially in the Democrat primary. Davis was a one trick pony and almost all of her money was from out of state. The money has already dried up. A UT/Tribune poll is probably 5 to 7% in her favor thus she is probably more 31% to 52% or so in Abbott’s favor. They have to keep her out of the public eye before she screws up even more. I want to thank Maria Shriver for doing the field interview for NBC and pissing off whoever was holding a grudge against Davis who then contacted Wayne Slater and ratted her out.

“For how long will Dem donors keep pouring money into her campaign?”

Until their last breath, foaming at the mouth…