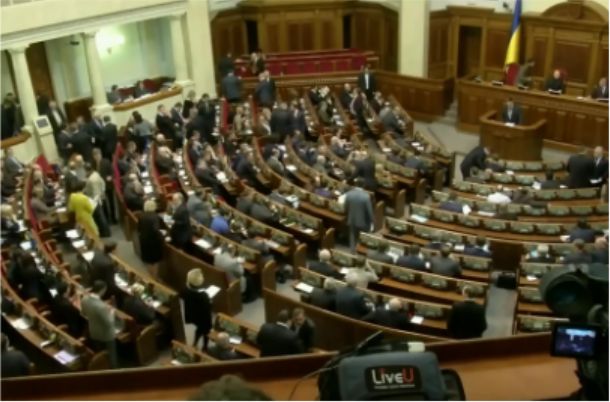 The Ukrainian parliament delayed a Tuesday deadline to form a new government, postponing those efforts until Thursday.

Ukraine’s interim leaders pushed back their self-imposed deadline to form a unity government Tuesday, while the whereabouts of the country’s fugitive president, Viktor Yanukovych, remained unknown.

Members of the Ukrainian parliament had set a Tuesday deadline to form a unity government. However, parliament speaker Oleksandr Turchinov, the leader of the interim government, announced that the deadline would be pushed back to Thursday.

While Parliament had let go some of Yanukovich’s lieutenants and named replacements, it still must fill other remaining government posts, according to CBS News.

Yanukovich has been on the run since his ouster over the weekend.  On Monday, the acting government issued a warrant for his arrest.

Ukraine’s parliament voted on Tuesday to send fugitive President Viktor Yanukovich to the International Criminal Court, while his acting successor expressed concern about “signs of separatism” in Russian-speaking Crimea.

A resolution, overwhelmingly supported by parliament, linked Yanukovich, who was ousted by the legislature on Saturday and is now on the run, to police violence against protesters which it said had led to the deaths of more than 100 citizens of Ukraine and other states.

The Hague-based court said it would need a request from the government of Ukraine giving it jurisdiction over the deaths.

I wish that we had the courage to do what the Egyptian and Ukraine folks did to vanquish evil from their country.

We are overdue for that Jeffersonian revolution…

There is a pretty good chance that the May election never happens, particularly if Russia intervenes or south-east splits. Even without it, Ukrainian ruling elite is rotten.

After they choose a new government, make up new laws, and rewrite the constitution, will the masked men let the Ukrainian Supreme Court out of their holding cell?