Where does Ukraine go now? 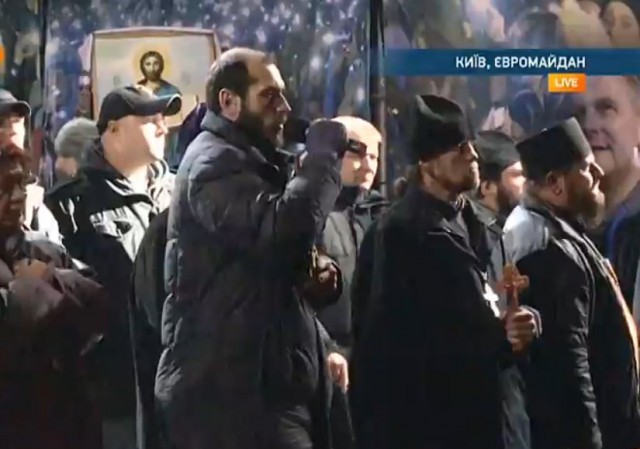 There are conflicting reports about an agreement reached between the government and opposition.

Reuters reports as of 8:23 Eastern, Yanukovich announces early Ukraine poll but no deal yet with opposition:

Ukraine’s President Viktor Yanukovich announced plans for early elections on Friday in a series of concessions to his pro-European opponents, but it was unclear whether they would accept an EU-mediated deal to end violence that has left dozens dead….

Yanukovich said Ukraine, which emerged from the wreckage of the Soviet Union in 1991, would revert to a previous constitution under which the president had less authority.

“I am also starting the process of a return to the 2004 constitution with a rebalancing of powers towards a parliamentary republic,” he said. “I call for the start of procedures for forming a government of national unity.”

Polish Prime Minister Donald Tusk, whose foreign minister is part of a European Union team trying to broker a compromise, said he could not be certain that the “worst-case scenario” could be avoided. “The threats are still there,” he told a news conference in Warsaw.

The EU mediators said the opposition was seeking last minute changes, but they still expected a deal to be signed on Friday. There were fist fights in parliament as the political tension mounted.

We will update as more in known.

Update: Accord Is Signed in Ukraine but Doubts Are Strong:

The embattled president of Ukraine and leaders of the opposition signed a political deal on Friday aimed at ending a spiral of lethal violence with early elections and a reduction in presidential powers, but Russia declined to endorse the accord, and many protesters said nothing short of the president’s resignation would get them off the street….

The deal reached Friday instead leaves Mr.Yanukovych in power until for at least the end of the year. It calls for early presidential elections in December, a swift return to a constitution of 2004 that sharply limited the president’s powers and the establishment within 10 days of a “government of national trust.”

You can follow the events at the live feeds below.

The (somewhat graphic)Twitter pic below demonstrates what this conflict has gone beyond politics, and why a political settlement may not be possible.

On Skype early this morning, I heard that three of the protesters key demands were met: amnesty; freedom for Yulia Yushenko and a limit on presidential power.

People in Ukraine want a return to the earlier, more liberal constitution, which limits presidential powers and relaxes some of the curbs on personal liberty. What’s wrong with that? As I recall, my forefathers here in Texas fought for a restoration of the Mexican Constitution of 1824.

Two things should give us hope. One is the overwhelming parliamentary vote against Yanukovich, and by extension, Russia. Second is the promise of early elections, against which Yanukovich and his sugar-daddy, Vlad the Great, were stridently opposed.

Even if elections really will be held, why should the protesters care?

Because if they’re fair Yanuk will be gone?

Of all the charges Yulia faced , the most lethal was that she was not a natural blonde. That was the end .

Unicameral parliament – everything can be overturned . This is one country that needed a Senate elected in alternate cycles .

A Senate that cannot make laws but passes or rejects parliament laws only . Remember them?