President and opposition say negotiations to begin, aimed at stabilizing the situation in the country 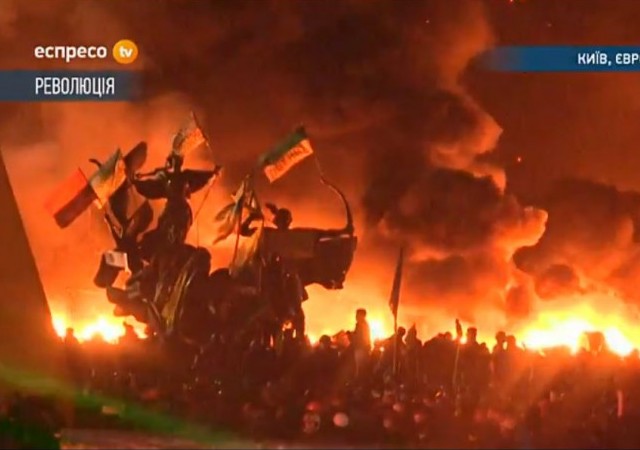 President of Ukraine Viktor Yanukovych said late Wednesday in a statement on his website that he and opposition leaders had agreed to a truce and will start negotiations in an effort to try and stabilize the situation in the country amid recent unrest.

The president of Ukraine and the leader of the anti-government movement have agreed to a “truce” and “negotiations” aimed at bringing an end to the violence that has torn the country apart.

In a statement on his official website, President Viktor Yanukovych said his government and the opposition have agreed to “negotiations aimed at cessation of bloodshed and stabilization of the situation in the country for the sake of civil peace.”

Opposition leader Vitali Klitschko said in a statement on his website that both sides reached an agreement on the negotiations and that the next round of talks will be held tomorrow (Thursday).

The website quoted Klitschko as saying, “We have received assurances from Yanukovych that there would be no assault on Maidan (Independence Square). Literally, it means a truce. Today a key goal is to stop the bloodshed that authorities have provoked and unleashed. Now we will see how Yanukovych will stick to his word after promised sanctions from the West.”

The announcements — the first significant sign of progress since the anti-government protests began nearly three months ago — came just one day after brutal clashes between demonstrators and police left at least 26 people dead and nearly 250 injured.

Earlier Wednesday, President Obama had weighed in on the situation in Ukraine, urging for an end to the violence and warning all sides that “there will be consequences if people step over the line.”

“The United States condemns in strongest terms the violence that’s taking place there [in Ukraine],” Obama said.  “We have been deeply engaged with our European partners as well as both the Ukrainian government and the opposition to try to assure that that violence ends. But we hold the Ukrainian government primarily responsible for making sure that it is dealing with peaceful protesters in an appropriate way, that the Ukrainian people are able to assemble and speak freely about their interests without fear of repression.”

Obama continued, “And I want to be very clear that as we work through these next several days in Ukraine that we are going to be watching very carefully and we expect the Ukrainian government to show restraint, to not resort to violence in dealing with peaceful protesters.  We’ve said that we also expect peaceful protesters to remain peaceful and we’ll be monitoring very carefully the situation, recognizing that, along with our European partners and the international community, there will be consequences if people step over the line.”

Obama did not specifically mention sanctions, but officials with both the US and the EU have mentioned that possibility, according to the LA Times.

Things are NOT what they seem and how they are reported in the West. These “peaceful protesters” are using live ammo against cops who were told to use gas (traumatic) guns firing rubber bullets. These “peaceful protesters” have attacked every blogger and journalist with one killed in the process just yesterday. These “peaceful protesters” have one leader who until just 2 weeks ago was seeking German citizenship and another who leads a Nazi like organization. They attacked military base in Lvov, just 100 meters from the house I used to live in and could see from school windows every day, to get their hands on arms. Yet again, military were told to stand down. Remarkable and overboard restraint, if you ask me, what would our LE and military do with 9 cops killed by these “peaceful protesters” and close to 300 seriously injured? Shame that we demand “restraint” from the wrong group of people. And shame that all “conservative” sites report utter nonsense via pink colored glasses. Any reason McCane was there last month disbursing OUR TAX DOLLARS to these “peaceful protesters”? And why isn’t anyone stating what is it that Ukraine will gain by joining EU? MOST of Ukraine have already witnessed Greece, Spain, Portugal and Italy as samples of “joining” and what you see in Kiev is nothing but OWS type mob. Why is it that we rail against OWS here on our shores, but finance and support them on foreign ones? Since when our tax dollars support and encourage a Nazi party and call them “peaceful protesters”.

At the bottom of a New York Times article on the Ukraine clashes, a protester engaged in ferrying rocks to rock-throwing protesters acknowledged they’d committed violence against police, but said, well, we were left with no choice.

I guess the torching of the president’s national party office, killing one employee, was something they had no choice about too. The American reaction if someone torched the national Democratic National Committee office, killing one, and the shooting dead of say, a couple of NYPD officers, would be much more sedate, I imagine? Or perhaps I am being sarcastic.

You don’t know what you’re talking about. Really.

Little old ladies have been standing in sub-zero weather, holding mirrors in front of the helmeted riot cops, shaming them by showing them what they have become. One is the 84-year old mother of one of my good friends, himself a decorated, former Red Army paratrooper, who fought in Afghanistan. He is working as a medic in a church turned morgue/hospital, while the priests shame the cops into staying outside. His wife e-mails me every 5-6 hours with updates.

Yanukovych turned his dogs loose because his front is cracking. Cops in Lviv went home. Cops elsewhere are calling in sick. Protests are breaking out in the traditional “Soviet” areas of the country, east of the Dnieper, even in Crimea and Donbass.

As for “extremists,” I’ll remind you that in every conflict there are those who act thusly. Recall that some protesters have been arrested, tortured and left to freeze in the woods. Israel’s war of independence had it’s Irgun-Stern Gang (Menachim Begin), and the Vietnam war had its Mei Lei. War is a dirty business, and revolts/uprisings are on the dirtier end of that.

Yeah, lots of “thugs” if you believe the official state media or the usual Soviet Russian press/broadcast organs.

One of the most poignant things I’ve heard is in an e-mail from a friend who works for Xerox in Kiev. He says that he now understands why Americans want their right to own guns protected.

To all readers, the above poster is most likely a paid provocatuer. His gist is that the events in the Ukraine are somehow not of Urkrainian origin. That’s all. I have found this Riddick in many forums relating to the happenings in the Urkraine.

His / her point about the deaths of police is factual.

Not that the police are prizes here or that dragging Ukraine back into the Russian sphere of influence should make us happy either, but as I replied above, the NY Times has reported about the protester aggression. (Downplayed, justified, yes, but it existed.)

There is a lot of meme policing going on, mostly on the Maidan side. Their pr arm in the West looks pretty well organized.

Anyone who knows history, or Putin, or Russia in regards to Ukraine (Holodomor) and expects the protestors to observe the Maquis de Queensbury rules is naive. Putin is trying to undo the 1991 accords that allowed Ukraine to leave the USSR.

The protestors should expect a military assault a la 1956 Hungary as soon as Sochi 2014 concludes. Negotiation is foolish at this point. The choices for them are to be armed and prepared to fight or accept their own death. There will be no room for a negotiated settlement with the Putin-backed Yanuchovich government. Russia has closed the border for Ukrainian goods until the government crushes the Euro Maidan protestors and before a EU treaty is implemented Ukraine cannot export to Europe.

Putin’s kleptocratic thugs will not leave without their pound of flesh, one way or another.

Just like 1956 Hungary neither side are angels but one side is thoroughly evil and will be bloodthirsty for revenge.

Sorry for the accidental downtick – I wanted the reply.

I have close friends there, and they tell me that they will NOT go peacefully back into the Russian Empire. Everyone has ancestors who died of starvation due to Lenin’s and Stalin’s “agriculture policies”. You think Jews are the only ones who have sworn, “Never again”?

After the Orange Revolution, where the aspiring despot blinked in the face of a popular, peaceful revolution, this next one has sworn not to step aside. Yanukovych fired the head of the army today, presumably because he refused to kill his countrymen.

The city of Lviv is largely in “rebel” hands, as it is the center of Ukrainian nationalism. They will not go quietly, especially after tasting freedom.

If you think this is going to be over soon, know that Ukrainian guerrillas fought the Soviets until 1960 or, by some accounts, as late as 1964.

FGS the nazis should just rejoin their German friends ( mr Klitchko was on queue for German citizenship ) & the east & Crimea go back to Russia.

Stop bothering the rest of us. They have done nothing but complain for 700 years & it is getting olde.

BannedbytheGuardian — Not so much. Your attempt to blame Stalin’s engineered famine and starvation of millions on a quack scientist is bizarre. So is your casual dismissal of Ukrainian opposition to 700 years of Russian domination.

We get it — you don’t like Ukrainians. Now please try to get past that and post something intelligible.

Lviv… lovely place. 40% voted for neo-Nazis in the last election.

Baloney. It’s easy to call someone a “Nazi”, but Svoboda is nothing of the sort.

Banned, with all due respect for your opinion, I’ve noted that everything for you is black and white and Jew / Non Jew. Are there no other redeeming qualities in mankind? To echo JPL, we get it, you don’t like Ukrainians (even the ones who were not involved in pogroms or were not anti-Semites), or the Hungarians, Poles, just about all Europe etc., etc. Is there anyone you do like or consider to be worthy?

I am off to apologise to mr van Rumpy!

The shame of not luvin Europe.