Troops in western Russia placed on alert in drill

Troops in western Russia placed on alert in drill 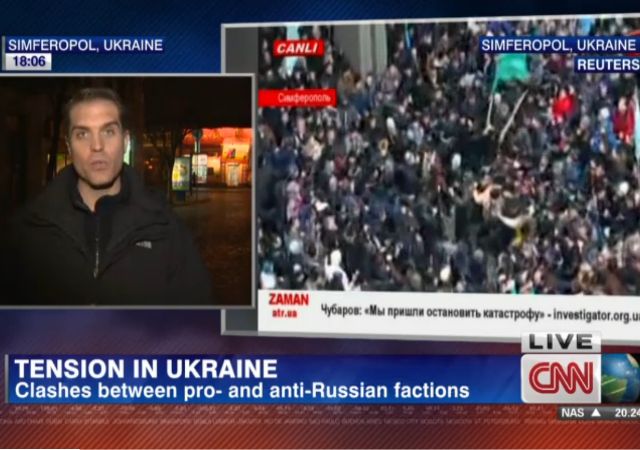 President Vladimir V. Putin ordered a surprise exercise of ground and air forces on Ukraine’s doorstep Wednesday, intending to demonstrate his country’s military preparedness at a time of heightened tensions with Europe and the United States over the turmoil gripping Russia’s western neighbor. The Obama administration said any Russian military intervention in Ukraine would be a costly and “grave mistake.”

Russia’s military put tens of thousands of troops in western Russia on alert at 2 p.m. for an exercise scheduled to last until March 3. The minister of defense, Sergei K. Shoigu, also announced unspecified measures to tighten security at the headquarters of Russia’s Black Sea Fleet on Ukraine’s Crimea peninsula.

The NY Times noted however that “senior defense and government officials later said the exercise was not related to the events in Ukraine.”  A Reuters article, Putin puts troops in western Russia on alert in drill, also reports that officials in Russia said the drills were previously planned.

Regardless of any advance notice, observers and U.S. officials of course remain concerned.

Speaking on MSNBC’s “Andrea Mitchell Reports” on Wednesday, Secretary of State John Kerry indicated that he hopes Russia will respect the sovereignty of Ukraine.

“We’re hoping that Russia will not see this as a sort of a continuation of the Cold War, we don’t see it that way,” Kerry said Wednesday on “Andrea Mitchell Reports” on MSNBC. “We do not believe this should be an East-West, Russia-United States — this is not ‘Rocky IV.’”

In the live interview from the State Department, Kerry said given Russia’s opposition to U.S. military intervention in other countries, he would expect them to stay out Ukraine militarily.

“It would be very difficult for me to understand how Russia would reconcile its position on Libya, its position on Syria, its warnings against intervention in another country and then not respect the sovereignty of Ukraine and the will of the people there,” Kerry said.

[…] “We see this as an opportunity for Russia, the United States and others to strengthen Ukraine, help them in this transition and there’s no reason they can’t look east and west and be involved as a vital cog in the economy of all of us going forward,” Kerry said.

(Longer video of above interview is available at the Washington Post)

Rival demonstrations meanwhile were underway in the southern Crimea region, according to CNN.

There is a lot going on in the east, there are calls for mass meetings across the area (probably to be called “Novorossia”) this coming Saturday. The area is up in arms about the reapeal of the prior language law that de facto established bilingualism. Plus, the defend our cities from banderistas rallying cry.
Local leadership in Kharkov departed for Russia for a day, communists blocked off the statue of Lenin, Nazis of Pravyy Sektor took over the city hall for a day (What, defending Lenin and not city hall?) In Nikolaev, locals pushed off out-of-towners from their rally area.

What a magnificent, powerful, foreign policy: Wishin’ and hopin’ and thinkin’ and prayin’

That is just being cheeky. However they have had incredible success in the Caucuses against all the dire warnings for Sochi.

I believe there is little future in Europe & whatever is left , Ukraine is too late for the party. On the other hand look at the east – it stretches to the pacific & far away from the madding crowd .

It’s not that Europe will fall ( although the ancient prediction is an Islamic invasion of Switzerland ) but that it can’t go much further. The east is not perfect but it is open territory , new markets , not such loser personalities , used to hardship & just very exciting .

And oh so beautiful . It is like Greenacres – you can have Europe , give me the steppes , the deserts , Siberia , China , Japan .

This is what Putin was offering Ukraine . If they don’t take it their loss forever.

He’s offering them serfdom, and they know it.

Not everyone dislikes serfdom.

Serfdom yes but with gas heating . Currently Ukrainians pay just 20% of the gas that it costs Ukraine to buy it from Russia . This is also at a reduced price.

It is going to bite . I read on conservative American sites that the US or sumboddee can supply but how? Ukraine has gas piped to every home . If they are to import from eg Bahrain then they need to build special container ports . It can’t be shipped across Europe which itself relies on Russian gas .

Perhaps they will fire up Chernobyl again. There are people moving back there!

And of course from parts of Russia , you can see Alaska .

Ha-ha! Very funny.
IMHO eastern Ukraine will chose Russia because they know that today they are not competitive on euro markets and change is hard. For all their talk of Slavic brotherhood and Nazi invasion… they want sausage.

Well now, so Putin has 150,000 troops of his loyal Russkie Army conducting war games near his Western Border with the Ukraine while our El Presidente orders the reduction of our military forces and also its reserve components to a very low level.

Perhaps this is what Obama meant when he told Medvedev that he, Obama, would have more flexibility after the 2012 national elections. I’m certain Putin appreciates Obama’s fine cooperative actions.

This is not like Munich, 1938, but more like the many weeks leading up to that meeting between those heads of government back then.

Wonder how more quickly now will Secretary Hagel accelerate his planned draw down of our active forces? His timing must consider the need to avoid any direct blame being put on his El Presidente.

Not that we should intervene in Ukraine, but that should be a wake up call.

The new president is a rich ….

Give is a B

Give us an A

Give us us an N

Give us a K

It is only the perception of America in retreat under Obama that would embolden Putin to undertake an invasion.

Ukraine, it should be noted, has recently discovered its own gas reserves – which will admittedly take some years to develop. This is all the more reason Putin wants to keep it in his sphere of influence even as Russian currency plunges and their oil revenues face a long term decline.

Except the gas reserves are largely in the Romanian claimed section & the east .