Tom Perkins’ Kristallnacht reference failed, but not his larger point

Tom Perkins’ Kristallnacht reference failed, but not his larger point 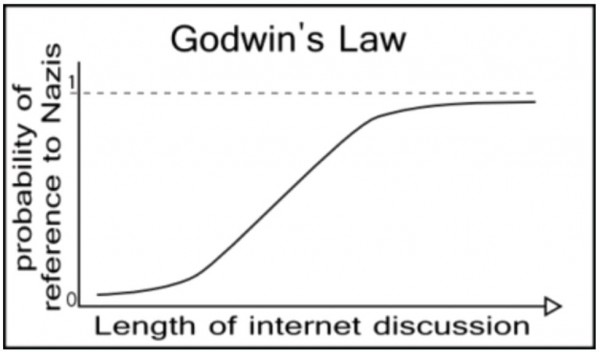 Remember Tom Perkins? The guy who wrote a letter to the editors of The Wall Street Journal comparing the war on the 1% not to Kristallnacht, but to the beginnings of a pattern that could possibly lead to something like Kristallnacht further down the road?

If you don’t remember, here’s a refresher on the relevant part of Perkins’ letter:

From the Occupy movement to the demonization of the rich embedded in virtually every word of our local newspaper, the San Francisco Chronicle, I perceive a rising tide of hatred of the successful one percent…This is a very dangerous drift in our American thinking. Kristallnacht was unthinkable in 1930; is its descendant “progressive” radicalism unthinkable now?

Perkins’ missive may just be “the most-read letter to the editor in the history of The Wall Street Journal.” And now he’s been forced to eat a little crow:

Amid the ongoing media furor and an ungallant rebuke from Kleiner Perkins, Mr. Perkins has apologized for the [Nazi era] comparison, without rebuking the larger argument.

It’s no surprise that Perkins was made to walk back his Kristallnacht reference—a fact that doesn’t take away from his point.

Predictably, when a person invokes a Nazi comparison people scoff, and Perkins compounded his scoffability quotient by invoking the Nazi comparison while defending the very rich, who were already not everybody’s favorite people for whom to feel sorry.

Nevertheless, what Perkins said isn’t even really all that controversial.

His point was about the dangers of the purposeful drumming up of hatred, not mere disagreement with or criticism of, an entire segment of society. And his analogy was between today and Germany in the earlier days of the Nazi rise (Hitler was not even chancellor yet in 1930), not to Germany as it was in 1938 (the date of Kristallnacht) or Germany later, when the Nazi machine had gotten the death apparatus fully in gear. His point is that hatred can be a continuum, and that the early propagandist days of hateful rhetoric might contain the seeds of later ones of hateful and destructive action.

The last sentence of the WSJ‘s editorial defending Perkins is therefore somewhat naive:

The liberals aren’t encouraging violence, but they are promoting personal vilification and the abuse of government power to punish political opponents.

Of course, sometimes violence isn’t necessary. Sometimes the re-education camps will do. Sometimes it’s enough to discourage people from speaking out in a way judged to be insufficiently PC.

[Featured Image Source: Know Your Meme. Explanation of Godwin’s Law here: “As an online discussion grows longer, the probability of a comparison involving Nazis or Hitler approaches one.”]

We make choices every day. Some choices lead us towards the light. Other choices draw us back to the tempting dark. Synthesis of good and evil is what is hoped for by the ruler of this world.

The lingo of the current regime is certainly bent towards unsettled greed and envy and no discourse. Silence of the truth is required for evil to succeed, whether of past Nazi evil or of the current Progressive evil or of the BDS boycott of Israeli ed institutions or of a double-lived Reverend.

He shouldn’t have apologized. He was right.

What did Kristallnacht have to do with any real or imagined “1%”?

Kristallnacht was at root a perversion of nationalism. Nationalism is one of the features which distinguishes fascists from communists.

The “1%” hysteria is much closer to something we’d expect from communists than fascists. The fascists had no problem with the “1%” so long as they were amenable to control.

Of course I’m speaking here of the historical fascists (the Italian and German flavors) and communists (primarily the performance artists formerly known as Bolsheviks).

RE: Nationalism is one of the features which distinguishes fascists from communists.

I beg your pardon but Stalin was a nationalist communist while Trotsky was an international communist who was labeled a fascist by Stalin. Stalin maintained the Internationale but its purpose was to support and take orders from the Russian CP which was headed by Stalin,

Kristallnacht resulted from the confluence of many forces crating a toxic brew that was deliberately spewed on one selected part of the German populace. Those forces were spiritual, economic, political, cultural, and nationalistic, with the latter rooted in the spiritual revival of worship of the old pagan Germanic gods. Add to this the influence of the spiritualists like Mme. Blavatsky whose “revelations” were the basis for the resurrection of symbols like the swastika and the focus on Aryanism.

Those who ordered and carried out Kristallnacht used the language of economics and nationalism to shield the fact that it was an attack on the God of Judaism. After all, who were the Jews? Unlike the German Christians, they were obviously not converts from the old German paganism. Moreover, if they were wiped out, then Nietzsche’s statement would become a literal. If the God of the Jews is dead, then who remains but the old Germanic gods? The two could not be allowed to inhabit the same sociocultural and theological space. So, millions of Jews were slaughtered, and some of the genuine Christians, like Bonhoeffer, were executed.

The attack on the 1%-ers is but a prelude to another attempt at clearing the same sociocultural and theological space, to make Nietzsche’s “God is dead” a literal. We do have a president who, like Hitler, is conversant with and upholds another belief system that is neither Judaism nor Christianity. Interestingly enough, he is the same one whose words hold the promise of another Kristallnacht.

The similarity is where the group agitating and seeking power identifies a small, unarmed group as a scapegoat and conducts a campaign of demonization and intimidation against them.

The analogy is strained, but it is not based on fantasy.

Unless they choose to live in NYC, D.C., or Chicago for perhaps a bit longer, that would only be by choice. Otherwise, in the rest of the country, they can be rather well armed, certainly enough to deter a crowd of new model Brown Shirt after a few examples are made.

I haven’t read his latest yet, but based on his previous books I’m sure Stephen Halbrook’s Gun Control in the Third Reich: Disarming the Jews and “Enemies of the State” will help explain how at least this detail is radically different, even if the direction the Left is going in is crystal clear, so to speak.

If we are headed for a national Kristallnacht (and I think we are), the initial targets will be chain stores and national franchises where the employees are forbidden being armed.

The wealthy enclaves are not, IMO, likely to be hit until later in the chaos. The wealthy should (but will not) take a lesson from the Jewish Ghettos which were initially fortified neighborhoods where the Jews could live in some security, and they generally had their own security forces. This did not do them much good.

I don’t find your scenarios plausible, and the latter seriously fails because in the end the Ghettos were disarmed and facing an entire nation state.

America is much more narrowly divided, as in there are many more on the Enemies of the People side, and there’s also geographic considerations. Attempts at a “national Kristallnacht” in my part of the country would be put down brutally if that level of force was necessary. And orders from HQ to stay disarmed would be ignored, not to mention how well armed the clientele is.

Anything that widespread, the sort of scenarios you’re talking about, would equate to a general civil war, and that’s a real game changer. There are relevant historical examples, but they aren’t to be found in the WWII Jewish experience.

2. It might prove interesting to run a sliding scale through modern history, comparing “ridiculous” and “sensible” predictions to what actually happened ten years later. Perkins has been alive a long time and seen a lot that the people who attack him haven’t.

For me, the whole point about references to Nazism seems to be lost on many, many current commenters. That could be because they do not understand what Germany was like just BEFORE the takeover by the Nazis.

Germany before the Nazis was a open, liberal, free-wheeling society, and it had a vibrant and sophisticated subpopulation of Jews in the arts.

That something as foul as the Nazi party could take over that society was a shock.

That the successors to the Tsars or the Chinese or the Japanese could commit atrocities seems sort of explainable: the the example of Germany different. I is a lesson in how quickly a civilized country could be degraded.

Some of the same factors are present in our society: the rise of atheism and the public satanism is matched by the turn to the old German paganism and the influence if Madame Blavatsky and other spiritualists. The intolerance of the Democrats and their willingness to demonize to achieve political ends, matched by the rhetoric and actions of Hitler and the Brown Shirts. The subversion of the rule of law via the consolidation of power in the hands of one man….

Godwin’s law is also misunderstood. It refers to a loss of rationality by someone losing an arguement and falling back on silly insults instead of a solid understanding of human nature and an awareness that historical patterns tend to repeat.

People forget that Obama said he is the only thing standing between the people with pitchforks and banker 1%-ers. Thereafter, the Occupy people took the stage. The guy’s reference to Kristallnacht was quite apropos because that’s where we will end up if Obama has his way.

The name Kristallnacht refers to the broken windows of Jewish businesses; a tactic of the Occupiers and anarchists is smashing windows. I think it is a valid reference.

I disagree entirely. Hitler focused the disparate elements simmering in Germany into Kristallnacht. His rabid anti-Semitism, his implicit acknowledgment that the gods of Germany could not inhabit the same space with the God of Israel, resulted in the mix of toxic forces roiling Germany to spew out on the Jews in Kristallnacht. Therefore, since he was the medium, if you will, you cannot speak of one without the other. I would also assert that the monster was there already in 1938. The Final Solution was not a chance matter; rather, it was the corollary of everything Hitler believed and set in train. It was the pagan monster in him who, way back when, conceived it and brought it to fruition.

The inclination might have been there, but the allies best resource was the quack of a Dr who fed Hitler all those drugs and poisons. I have never seen a timeline of Hitler’s loss of sanity, and doubt if one is possible, but he definately lost his wits.

To encourage hatred and envy rather than rational criticism is to help to encourage violence, at least potentially, and that’s what Perkins was talking about.

For an example of the encouragement of lynch mentality against Tom Perkins, there’s none better than Leonard Pitts’s syndicated column today. He’s doing his best imitation of Trotskyian cynicism, and keeps it up for half a page. For example:

Where will it end? Will they make you fly commercial? Buy off the rack? Golf on a public course? Might as well hitch up the boxcars and pack you in.

I read a few of Leonard Pitts’ columns 25 years or so ago, and decided life was too short to waste on banal leftist racial grievance-mongering utterly devoid of any insight, perspective, or humor.