The Rushdie Fatwa and the Moderate Rouhani

The Rushdie Fatwa and the Moderate Rouhani

35 years ago was the Iranian revolution. The Rushdie fatwa was 25 years ago. 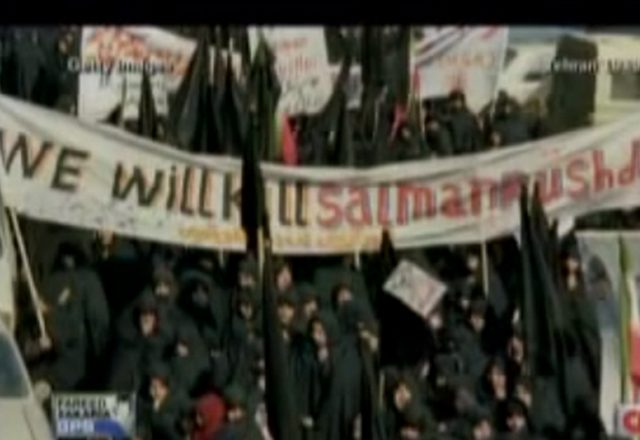 Last week there were two anniversaries pertaining to the Islamic republic of Iran.

The first commemoration was the thirty fifth anniversary of the Iranian revolution. Both the New York Times and Washington Post remembered the event.

The New York Times article, written by Thomas Erdbrink, Cries of ‘Death to America’ as Iranians Celebrate 35th Anniversary of Revolution wasn’t bad. It focused on the anti-American rallies held in honor of the anniversary.

Erdbrink, unfortunately, wrote that the anti-American protests had been organized by “hard-line” factions, implying that more moderate Iranian factions (in politics) didn’t agree with the sentiment. Overall, though, Erdbrink captured the official enmity that Iran holds towards the United States.

In the Washington Post, Jason Rezaian’s Iran’s Islamic republic at 35: Poised for change and a less isolated existence was disgraceful. For the most part the report was how Iran was different and more conciliatory under Rouhani. There was nothing about the anti-American rallies. However, there were two sentences that were worth noting. One was, “The president has not answered calls from many Iranians for expanded civil liberties and social reforms,” which speaks for itself. Given the gist of the article, Rezaian didn’t seem to attach much importance to it.

The other notable sentence was, “Not since the 1989-97 presidency of Ali Akbar Hashemi Rafsanjani, a close ally of Rouhani’s, has Iran enjoyed the sort of consensus it does right now between religious conservatives and more pragmatic politicians.” Rezaian is correct about this, but this is because the “pragmatic” politicians are also “religious conservatives.” It doesn’t reflect the moderation of the conservatives, as much as the extremism of the pragmatists.

There was another Iran related anniversary last week. It was the twenty fifth anniversary of the Ayatollah Khomeini’s fatwa against Salman Rushdie for the publication of “The Satanic Verses.” Neither the New York Times nor the Washington Post covered this anniversary. (The New York Times had an article that mentioned that Rushdie’s book was banned in India; but the article had no mention of the Iranian fatwa that precipitated the banning.)

Daniel Pipes summed up the significance of the fatwa.

In the span of a decade, the Ayatollah Khomeini has twice challenged Western civilization’s deepest norms. By permitting a seizure of the American embassy, in November 1979, he violated the most hallowed laws of Western diplomacy. In February 1989, he struck again, by calling for the murder of British novelist Salman Rushdie, and of his publishers.

In short, an underlying principle of Iran’s revolution is a rejection of Western values and norms.

The Daily Mail, that did mention the anniversary, summed up some of the consequences of the fatwa.

The religious ruling forced the award-winning writer into hiding, and Britain’s ties with the Islamic republic were severely damaged just a few years after collaborating on a UN resolution between Iraq and Iran.

Hitoshi Igarashi, the Japanese translator, was stabbed to death in the face at work, a Norwegian publisher shot and an Italian publisher knifed.

Thousands took to the streets to burn copies of the book and thirty-seven people were massacred in Sivas, Turkey, in a 1993 attack intended to target Aziz Nesin, the book’s Turkish translator.

Rushdie remained under Scotland Yard protection until 2002. Even if the British government no longer perceives a threat against Rushdie, the fatwa is still extant. The Daily Mail reported that a senior cleric renewed the call for Rushdie’s death last week.

Currently, there is a trend to portray Iran as moderating under the leadership of President Hassan Rouhani, as evidenced by the Washington Post article. (Certainly, a number of New York Times articles presented the same perspective.)

The confluence of last week’s two anniversaries suggest another question that needs to be asked: How does President Rouhani feel about the Rushdie fatwa. One of the frustrating things about recent coverage of Iran is the degree to which Rouhani’s history is ignored . You could even make a case that what’s been reported about him in the mainstream meda before 2013 showed Rouhani to be a regime insider.

Rouhani has authored at least ten books and forty academic articles on politically pertinent issues, totaling over 7,000 pages of open-source Farsi-language material. These writings, along with countless speeches and campaign interviews from his three-decade political career, mean that a clear picture of him is well within reach.

Ditto, in fact has answered the question. On a couple of occasions Rouhani expressed his support for the fatwa. Once was in 1993:

In meetings with German officials, Rouhani offered a nuanced explanation of Iran’s position: Khomeini’s fatwa was unchangeable; Iran deplored Rushdie’s offense to Muslim feelings and the West’s inability to understand the pain it had caused; but Khomeini’s sentence against Rushdie was articulated in his capacity as a religious jurisprudent, not as a state actor. Khomeini had the “freedom” to give the verdict, but it was directed at individual Muslims to fulfill as a religious duty. News reports from 1995 indicate that Rouhani traveled to London to discuss the Rushdie incident, no doubt using a version of this argument to help reestablish diplomatic relations with the United Kingdom. 6 However, Rouhani, clearly angered by the issue, would state at the end of the Germany trip: “The West should tolerate the edict [fatwa] as an act of freedom of expression, just as it shelters Rushdie for the sake of the so-called freedom of expression.”

Rouhani understands the West enough to cast his argument in terms of freedom of expression. It’s chilling that he considers putting out a hit on a civilian of another country constitutes that freedom.

For all the talk of Rouhani’s moderation, his record shows him to be a loyal follower of the late Ayatollah Khomeini and the current Supreme Leader, Khamenei. He is not moderate, except in temperament.

The larger implication of the fatwa is that Iran is just as hostile to the United States as it was when it stormed the American embassy or its leader issued the fatwa. What’s changed is how the outrage against these affronts to Western norms has dissipated in the West.

Rushdie was a coward. He ought to have just gone out & said -‘ yeah so what motherfuckers ‘ .

As it is , he has done nothing more since then but be a weasel running scared of a little fatwa. Fatwas are just the Muslim equivalent of a twitter ‘ I hate you ‘ .

I won’t let MAB down , I must blame some Europeans . The French ! Those suckers succoured those idiot mullahs .

I really don’t understand the media’s repeated downplaying of Iran’s hatred of the West in general, and of the US and Israel in particular.

I suppose that if something contradicts the Left’s view of “all Muslims are moderate” they tend to ignore it, but this issue with Iran seems to go well beyond that.

Yukio, it could also be that they really, really want a deal so they don’t want do believe anything that could mess it up. They do believe that al Qaeda is bad.

Yeah, that is true. People tend to ignore things that doesn’t further their cause/agenda– even to the point of comedy like the WaPo article (a very tough read).

It’s just hard for me to reconcile the throw-a-shoe-at-the-Israeli-flag booth on college campuses and such with really wanting to make a deal with Iran and the Palestinians. But I suppose I shouldn’t mash the two together.

Re-reading this comment, I find it sounds snarky. Sorry. I don’t mean it to be.