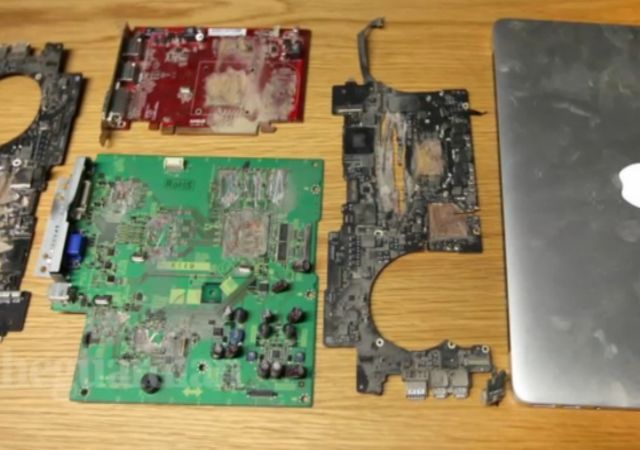 Last summer, we posted about the Guardian’s revelation that authorities with the UK Government Communications Headquarters (GCHQ) weeks earlier had entered the outlet’s building and overseen the destruction of hard drives containing documents leaked by former NSA contractor Edward Snowden.

In a new video released Friday by The Guardian for the first time, several of its employees can be seen using power tools to destroy the hardware on July 20, 2013, under what The Guardian called the “watchful gaze of two technicians” from the GCHQ.

Three Guardian staff members – Johnson, executive director Sheila Fitzsimons and computer expert David Blishen – carried out the demolition of the Guardian’s hard drives. It was hot, sweaty work. On the instructions of GCHQ, the trio bought angle-grinders, dremels – a drill with a revolving bit – and masks. The spy agency provided one piece of hi-tech equipment, a “degausser”, which destroys magnetic fields, and erases data. It took three hours to smash up the computers. The journalists then fed the pieces into the degausser.

Two GCHQ technical experts – “Ian” and “Chris” – recorded the process on their iPhones. Afterwards they headed back to GCHQ’s doughnut-shaped HQ in Cheltenham carrying presents for family members, bought on their rare visit to the capital.

“It was purely a symbolic act,” Johnson said. “We knew that. GCHQ knew that. And the government knew that,” He added: “It was the most surreal event I have witnessed in British journalism.”

Guardian editor Alan Rusbridger previously recounted that he’d tried to explain to government authorities that destroying the files would not stop the reporting on the story.  Already, other collaborating media organizations were reporting on the NSA stories from other countries, and continue to do so today.

The Guardian’s release of the video also comes just ahead of the release of a new book – The Snowden Files: The Inside Story of the World’s Most Wanted Man – written by the Guardian correspondent, Luke Harding.

From the images, I must say that most of this effort was symbolic. The hard drive can be seen to be disassembled and the platters removed and scratched, but beyond that the rest was silly. The one board looks like a USB or FireWire board, destroying it might make you feel better, but it did nothing for national security if the UK or any body else.

It gets worse. At the time he took the data, I heard that he had them on several USB drives.

The whole Snowden thing is fake. The minimal stuff that has been ‘exposed’ is , well , minimal.

He has a short time to reveal something of worth ( yes we knew they spied on everyone ) .

The Guardian … Clowns at Work … “It was ht sweaty work!”

The only part that matters is the disk assembly.

They could have left it intact and simply slapped a big neodymium magnet on it.

What a perfect little piece of security theater.

And: a degausser is to high-tech equipment as Burl Ives is to Top 40.

A much simpler solution would have been to ask, “Will it blend?”

Or get Jack Lalane to make a smoothie out of it.

Or Dianne Nyquist could pull it to Cuba in her teeth.

Or Richard Simmons could hide it up his …. oh, nevermind, it would be found too soon there.

GQHQ were allowing the Guardian to keep the files and use them for reference to publish off of as long as they kept them secure. GQ repeatedly asked the Guardian to secure the files much better than they were. So, when the Guardian did not do so, GQ made them destroy them.
That destruction resulted in the Guardian having to hire Greenwald’s husband as a document mule to transport another copy of some of the files from Laura Potrias in Berlin. This gave major clues on where the files are located, who the administrator of them is and if the co-conspirators were still using Lavabit or another file upload site to store copies.
The answers were:
Berlin
Laura Potrias
No