The Case for Israel and Academic Freedom

The Case for Israel and Academic Freedom 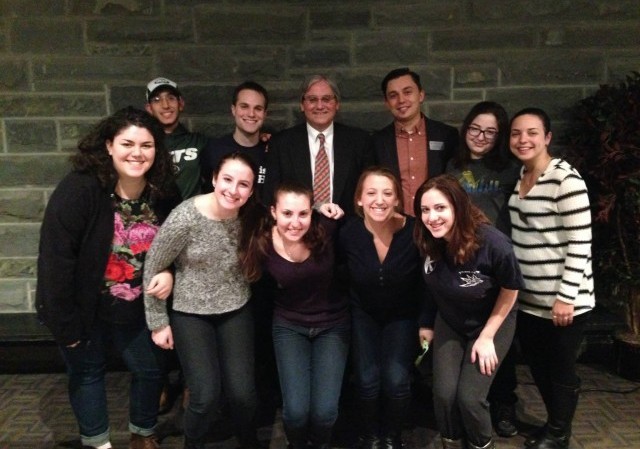 I appeared on Tuesday evening, February 25, 2014, at Ithaca College for a talk on The Case for Israel and Academic Freedom.

The appearance was in response to the appearance at Ithaca College of Cornell Professor Eric Cheyfitz, a vocal supporter of the anti-Israel BDS movement and particlarly the American Studies Association academic boycott of Israel.

When I learned that Cheyfitz was appearing to speak in favor of the academic boycott at the request of three Ithaca College academic units, I requested that I be allowed to appear with him so that students could hear both sides.   In response, I was offered 5 minutes to rebut his arguments, which I declined, because that was not a meaningful time.

I was told that the sponsors wanted to build the event around Cheyfitz, and when I asked them to build an event around me to follow his talk, I was denied.

So I reached out to Ithaca College Hillel, which agreed to sponsor my talk. My talk took place right after Cheyfitz’s talk, directly across the hall.

We had a great attendance, both students and members of the community. In addition to the Ithaca College Hillel Student Board (see Featured Image), the were a number of the Alpha Epsilon Pi brothers on hand. 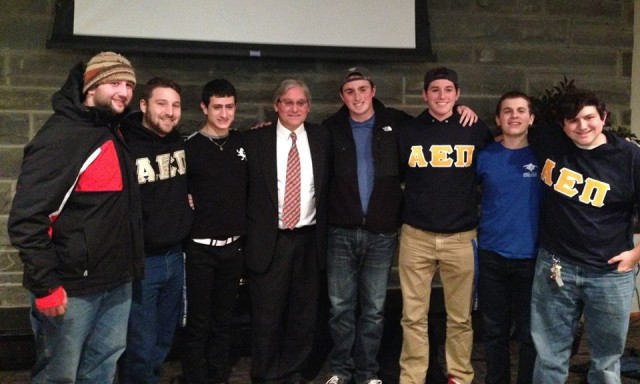 Here’s the video of my talk. Be sure to watch the question asked by a BDS supporter and my answer at the 54 minute mark)

[…] On Tuesday night, Jacobson gave a talk at Ithaca College about Israel and academic freedom. […]

You are seriously awesome, Professor J.

As a relative newcomer to your blog, this video is the first time I’ve seen you “in action”. Very cool!

As a Christian supporter of Israel, I find you talk very informative and enlightening. I am constantly amazed at my Jewish friends who believe that more concessions are the way to have peace with their enemies.

The information in your talk is the reason the BDS movement would prefer to fight their fight with disruption, shouting down and censorship.

I don’t know if he realizes it, but the Arab Israeli professor from Technion you refer to at about the 11:00 mark who talks about how the voluntary mutual cooperation between Arabs and Jews at Technion is the model for creating a peaceful Middle East is espousing libertarian philosophy.

That is, libertarians believe that voluntary association and cooperation induces trade, and the more we all trade with each other the more likely we will be to tolerate our differences as both parties benefit from free trade. So the more trade the occurs the more prosperous we all become and the more likely the world will be at peace. At a very simplistic level, there’s an incentive to avoid using military coercion against your suppliers and customers and vice versa. Maybe Ron Paul isn’t as crazy as his critics portray him, huh?

Great speech. I’d love to see the other guy’s speech to compare.

I listened in to Cheyfitz for a short while. It was so cliched as to be almost funny, rather like a post-modern Monty Python. In no particular order he talked about Israel being the only colonialist in the world, that the US presidents take their marching orders from the Israelis, that the Palestinians can never recognize Israel as a Jewish state because that would mean giving up their “right” to “return”. There was also much bemoaning and hand-wringing about the fact that he gets called a self-hating Jew and people who share his opinions are singled out for “persecution” (I can’t remember if he used that exact word but that was the intent) by the pro-Israel lobby etc etc. Quite pathetic (in my view) but I did hear people walking out afterwards who thought that Cheyfitz “spoke well” arrrrh!
William Jacobson gave a brilliant talk. The video is fairly muted but he connected with the audience on an emotional as well as an intellectual level. I have been listening to debates on Israel in academic circles and other public forums for 25 years and I have not heard anybody who addresses exactly what the audience needs as well as Jacobson. Amazingly effective talk. I would like to see him argue the case more on national and international media. For example, Naftali Bennett did pretty well in this BBC interview (http://www.youtube.com/watch?v=22GP-jR9OkA#t=1442) but I feel that somebody like Jacobson would be much more effective. I know I’m comparing two different types of situations here but I do feel that the pro-Israel argument needs to be made more effectively.