Childlike belief that Assad would talk himself out of power may have done more damage than doing nothing. 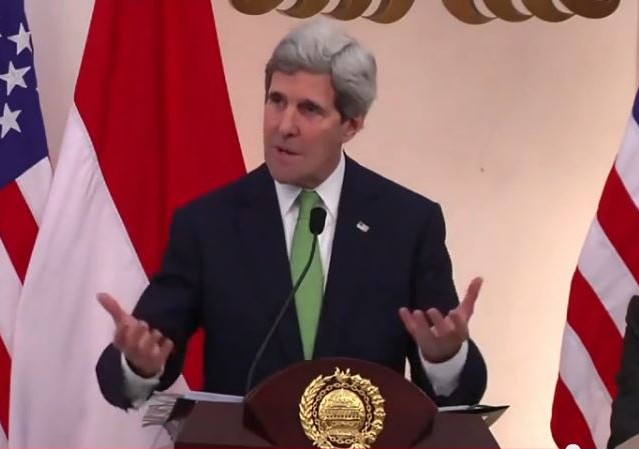 Did anyone actually expect the Geneva conference with the warring parties in Syria to end in anything other than complete failure?

Apparently someone did.  John Kerry, who now is embittered at the outcome, Kerry Blames Syrian Government for Deadlocked Talks

Secretary of State John Kerry issued a statement on Sunday night that blamed the Syrian government for the deadlock in peace talks but asserted that the United States remained “committed to the Geneva process.”

Mr. Kerry’s statement followed two rounds of generally fruitless discussions during which the Syrian government continued its attacks on rebel-held areas with crude weapons known as barrel bombs, and came as more than 200,000 Syrians remained cut off from humanitarian assistance.

Lakhdar Brahimi, the United Nations special envoy to the negotiations, underscored the frustration when he apologized to the Syrian people over the weekend and questioned the value of continuing the talks.

The main aim of Mr. Kerry’s statement appeared to be to pressure President Bashar al-Assad and to keep alive the hope that a political settlement might be reached in Syria. He was scheduled to fly on Monday to the United Arab Emirates, which is among the Persian Gulf countries that have supported the rebels.

Kerry’s optimism that Bashar Assad would talk himself out of power was naive at best, dangerous at worst.  There appears to be no Plan B, as Paul Mirengoff at Power Line notes:

The peace talks weren’t just a non-event; they were another blow to U.S. interests and another success for Assad. Why? Because the non-extremist opposition, which participated at America’s urging, comes away with nothing. Thus, as the Washington Post suggests, it is likely to lose what little influence and credibility it possesses among front-line fighters.

This represents a victory for the extremist opposition, including al Qaeda. And it is also a victory for Assad, who relies on fear of extremist elements in the opposition to maintain power and keep the U.S. at arms length. Indeed, Assad’s representatives have acknowledged that they came to Geneva to raise awareness of the terrorist threat posed by the opposition. Clearly, they did not come to make concessions, not even small, purely humanitarian ones….

What’s next? More of the same. The Post reminds us that the Geneva talks, which we have seen were always destined to fail, “represent the only strategy Obama has advanced to try to end the war.” Moreover, “Western diplomats have acknowledged that they have no Plan B.”

Unless one counts being jerked around some more by the Russians.

The choice is not always between war and peace.  Doing nothing in Syria may have been better than peace talks that had no chance of success.

With ensuring abortion rights and gay rights around the world, plus getting the world to understand the horrors of global warming, our foreign policy is just too overloaded to be coherent regarding something like Syria.

The scary part is that Obama’s domestic policies are even worse than his foreign policy.

Kerry should take a hint, the Iranians are smarter than the Syrians

AND, the Iranians are smarter than Kerry.

And the Iranians wouldn’t have an easy route to supply Assad, if you know who hadn’t invaded Iraq and helped install a government which is friendly to Iraq and unfriendly to us.

like much of what you post, that is just ignorant of fact. the iranians had been pumping money, fighters, rockets and much else into syria, lebanon and wherever else they wanted in the region long before that man who still dances free in the collective proggie head became president. but hey…..squirrel! right?

It isn’t that they are just smarter than Kerry, it’s also clear that both they and the Russians clearly understand what their interests are.

That is something the Obami lack. As the last five-year decline has proven.

It is easier when you are unscrupulous and have a dictatorship. You are right about not knowing what our interest are. What are our interests? Even among conservatives, that seems to be in dispute. Some want us all in and others want us out. Both criticize Obama.

“As the last five-year decline has proven.” LOL. He inherited Iraq and Afghanistan. So we were on the up-slope when he took office?

Decidedly. As both Biden and Obama have said.

But the world is not Afghanistan and/or Iraq. And the world is the stage on which the Obamic Decline has been played out.

As any objective observer would have to admit.

Yes things were definitely better in Iraq & Afghanistan . There was a exit agreement with Iraq & the military situation in Afghanistan was better than it is now .

Further Obama wanted the job , he declared he could handle the war stuff coz it was easy peazie for a man with not a single day’s military experience. Or even military history.

If we look back 2008 will be seen as the high point in both war theatres for the west.

The only person who isn’t smarter than Kerry is Mrs. Kerry.

It’s like our State Dept. lost some of the items on the “Diplomacy For Dummies” flow-chart when Pres. ScamWOW came to power.

Just think what having Bolton come in for a few weeks of contract work could do…!!!

A grown-up, with a clue! Haven’t seen one of those for five years.

Yeah, I really want to bring back the good old days. Like when Bush called Iran part of the ‘Axis of Evil’ while they were cooperating with us on Afghanistan.

Yeah, Bolton was a huge success! Remind me again. What did he accomplish?

Your illiteracy is quite impressive.

Yes, he is very good at sabotaging things. But what has he accomplished? What world situation is better because of his ‘diplomacy’? Educate me. One thing. That should be easy. Even a broken analog clock is right twice a day.

Educating a troll is a Pyrrhic exercise. (You’ll need to look that up, too.)

@Ragspierre So you can’t name one.

Is there no credit for the fine work done by Hillary, touted as one of the finest ever as Secretary of State? Oh, that’s right – she didn’t do a damn thing either….

The fundie nutter Saudis are funding the opposition in Syria, Its like Ollie North Arming the (“moderate”) Iranians & RayGun insuring Al Quedo never lacks for fund-age… inotherwords, what could possibly go wrong by supporting the most extreme of the extreme nutters who openly hate america & everything decent we stand for. Just look to the Koas in Iraq & the increasingly arms, bombings in Egypt, Blowback is acoming my friends

Kerry thinks the Assad family is going to step down, when they know they and their Allawites will be massacred?

Somehow, I think Assad thinks of himself as a heroic ruler.

As for who’s doing what in Syria, I have to wonder why anybody at all credits any news report from that region.

More like he inherited the family business. It’s like a mafia family, but then again, that’s not so uncommon, is it? I vaguely recall the reason this Assad was put in charge was because he didn’t upset the balance of power in the armed forces, reducing the incentive for civil war between ruling party factions (including other Assad family members).

Some problems don’t have solutions.

No, there are solutions to every problem. Having the conviction to deal with the problem is…the problem.

U.S. Ambassador to Syria Robert Ford to retire (and Egypt doesn’t want him)

Who’s the next clown to go? Alan Grayson? the Worm? Both seem like Rational choices under this admin?

Ambassador Ford seems to get all the good postings, Damascus, Algiers, Baghdad, Kabul, Cairo – maybe he should try a safer spot such as Mogadishu.

Kerry is a clownish figure whom all the parties involved in the Middle Esat – Arabs, Iranians, and Israelis must find as an appallingly naive and ignorant figure.

“Childlike belief.” There is no better way to describe the intellectual foundation of this administration, progressives, and the “elites.”

A stunning level of ineptitude that exceeds even the Carter administration. Pathetic. Embarrassing. Dangerous.