When journalists descended on Sochi last week, many took to Twitter to express their dismay at the state of their hotel rooms. While their conditions are hardly ideal- yellow water, bees in the honey, and more- they are certainly providing entertainment for audiences back home.

Here are six of the most horrifying #SochiProblems that make me feel especially thankful that I am in the US, where there is clear water, working doors, and toilets that flush the paper.

Side note: while many Sochi fakes have come out, we believe these (unfortunately) to be real.

1. Managing editor – sports for Yahoo! Canada, Steve McAllister, was locked inside his room:

2. Olympic bobsledder Johnny Quinn seems to know exactly how to handle that sort of situation: 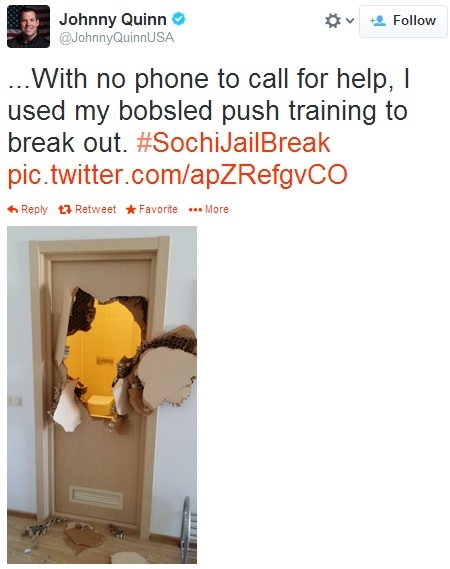 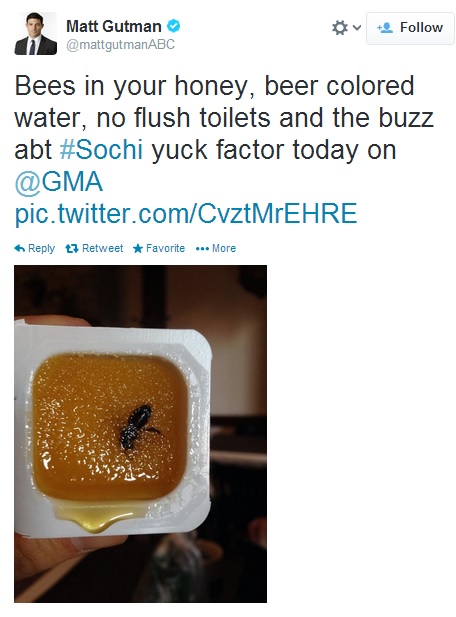 4. I’m sure nothing could be more reassuring than arriving back at your hotel room and finding it like this: 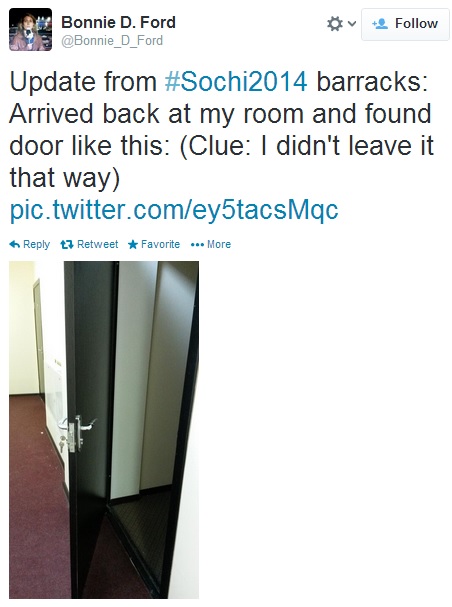 5. Some creative plumbing is also going on in Sochi, that’s for sure: 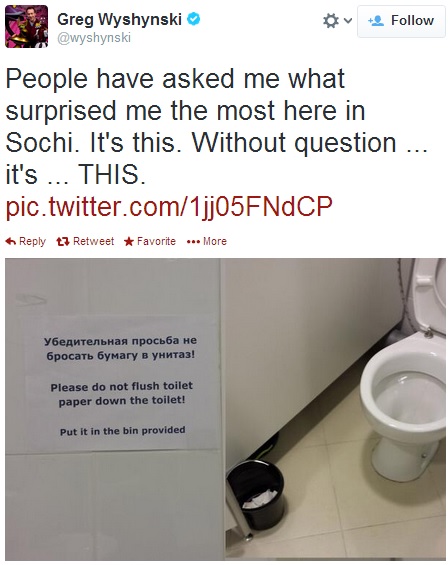 6. We saved the best for last- this water doesn’t seem suspicious at all, right? Bottoms up! 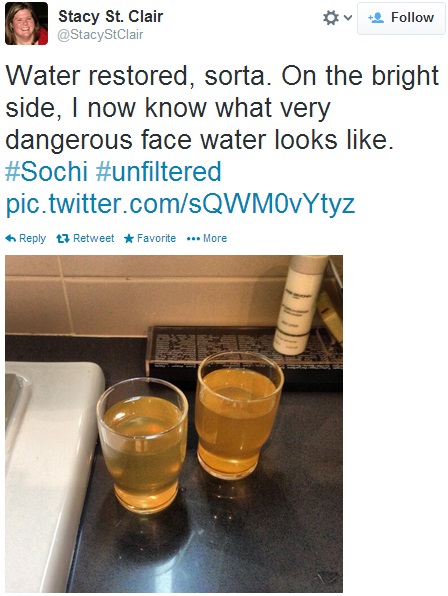 Bonus round: It seems that Obama is not the only one with website troubles! 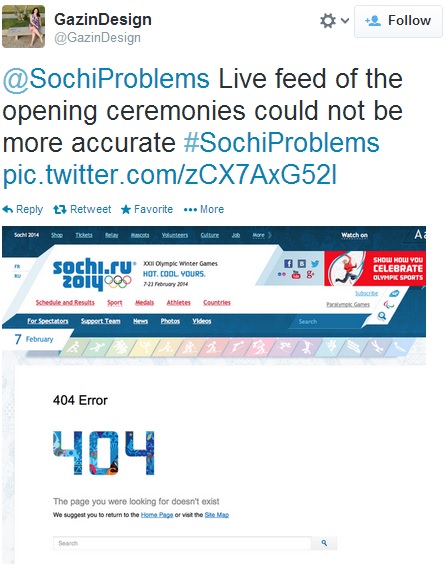 Goes to show that Putin is no Mussolini.

Now wait, that’s not fair; the trains may run on time.

Not even “One Day in the Life of Ivan Denisovich.”

Don’t worry about this making Russia look bad. After Obama gets done here, the stuff over there will look good in comparison.

The disgusting thing is, these prima donnas have seen variations on this sort of thing all over the world, time and again, and they never say anything about it. Never.

Clean water, toilets that flush, locks that mean something, electricity on demand, no packs of wild dogs in the streets, no fifteen hundred mile safety zones – these are what America is really about and they never say it. Never.

Wouldn’t bother me a bit if the whole lousy lot of them come down with water borne diseases.

Putin needs to stick to the only tactic he knows: KGB thuggery.

Cry me a friggin river. These snotty whiny presstitutes still haven’t learned the first rule of journalism – The story is NOT about them.

I hope they have a miserable time, so miserable they don’t have time to tweet out their pathetic complaints.

I wonder if Putin deliberately assigned these snot-nosed sniveling punks to sub-standard conditions. If so, I say bravo.

There has been quite the backlash against these sniveling snots. Check Whiny journalists on twitter.

When presstitutes are criticizing other presstitutes you know there’s a problem. The only groups with tighter herd mentality are unions and the mafia.

The Sochi Olympics are 4x over budget at a reported $50 Billion. For that amount of overrun, one has reason to expect things like non-lethal elevators, toilets that flush, light bulbs that function, doorknobs on doors, privacy in the loo, no strangers entering your room in the middle of the night, foodstuffs that are edible and not contaminated with insects, faucets that actually function, water that does not resemble urine, slightly spacious athletes quarters, doors that lock and unlock only when the occupant wishes, bathroom doors that do not seal bobsledders inside, hotel lobbies with actual floors, showers without video cameras, bathrooms without mirrored ceilings.

But wait, this is an American problem. How dare the journalists have an expectation of a toilet not in a hallway, a toilet that actually flushes, a toilet that is not two feet from another, toilet paper…. The restroom in Bryant Park, NYC, is more luxurious than the Moscow subway. Spoiled Americans.

But one bonus…Russian toilet paper can double for 40 grit sandpaper.

Go ahead, venture outside the Olympic venues, where Lenin’s sanitoria, the “Palaces for the Proletariat,” are being replaced with hotels…and the construction debris dumped in nearby Caucasus villages that have had their water cut off since construction began about 5 years ago. That’s okay, the Russian government provides bottled water. Ever had Russian bottled water? Might as well ingest a salt shaker. Diet Coke works better to brush your teeth.

Typical Russian show off, kind of like the mafia bosses in flashy clothes. But behind the expensive facade is a shabby infrastructure.

I have surveyed the American Canadian & British media ballistic attack . All have their reasons to hate on Russia.

In short you can have your gays Lauren & base all your political
/ sporting / cultural envoys as the Gay Vanguard. The rest of the world is enjoying this Olympics with top facilities & picturesque scenery which I guarantee few people have ever viewed never mind experienced.

If there were to Olympic medals for the most stupid comments , Americans would win.. American media are lucky their heads are not kicked in .

I just watched the ice skating roof almost explode with a massive applause for 15 year old Julia lLitvinsaya . All of us out here can see the emergence of a superstar of sport .

Yes Putin was there. You can keep your pathetic downticker . The action is on & everyone is watching Sochi .

Don’t you have a job you can attend to?

No I eat drink & watch sports. I am watching the women’s skiing now eating cadbury’s chocolate & drinking rose. An Italian girl is coming first so far.

Phewwh it is very tiring .

Well it’s fun to snicker at the backward Russians, mostly because they ARE backwards. The NYT had a story a while back about the drive from Saint Petersburg to Moscow — illuminating.

And while Russian craftsmanship at its best can be superb, at its ordinary it is very poor. So I’m not surprised that the hotels are poorly done and the water has that amber hue.

But yes, Julia lLitvinsaya is amazing, and the public spaces shown on the television look first rate.

From Georgia to New Hampshire I found pretty ordinary hotels but I never complained. In Ny I purposely got a brand new hotel $140 per night near the JFK so as not to get bedbugs . I was treated very rudely until they realised I understood Russian. I could have complained but I was amused. The only food available involved crossing roads ‘ ,& a urban ‘park ‘ to the gas station I saw in the distance . Hey this was NY. I can give you dodgy.

To travel is a luxury . I don’t travel to find luxury . I travel to learn & find the quirk.i am seriously thinking of going to Detroit to see for myself the change from 79 when I went there last . I imagine it will be like my time viewing the crumbling soviet industry site in Vladimir from a scenic vantage point .
There will need to be a lot of America rebuilt . In sporting terms I can see no big international events planned for America . You just don’t have the money .

I don’t expect luxury when I travel, in fact I find it excessive because I like to be out on the street anyway. I do, however, expect the basic amenities.

My mistake . There is the GAYGAMES in Cleveland this year.

Ok I apologise a bit . I did not realise you guys are not even getting live coverage . What you get is fully censored .

I tell you it’s great.

Are you are wannabe professional journalist? I ask because al your long winded posts seem to be about you.

At least it verifies I am not a fake Yankee NC Mountain Gal.

A bobsledder nearly walked into an open elevator shaft today. So it is not just reporters.

Not that it could not happen to a guy who wears his hat backwards but it is the SAME guy who broke out of the toilet.

Also there is a good pic of Putin with the US ice skating team who all look to be very very happy . That is one effusive arm shake with the Rather frail lady ice dancer .

Intriguingly US media has not mentioned the presence of that noted ice bunny Hamid Khazai . He is enjoying himself in the land of his former mentors./ invaders . Perhaps the US is next on his list of vacations after he oversees their exit.