Returning Syrian Jihadists coming to a town near you?

Returning Syrian Jihadists coming to a town near you?

Foreign fighters recruited by Al Qaeda and Hezbollah are fighting in Syria. What happens when they come home? 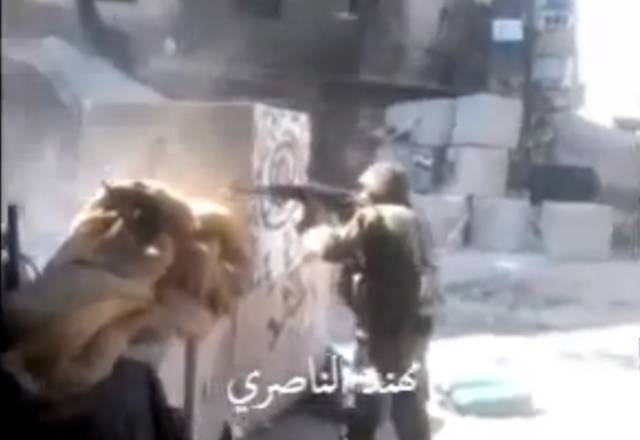 A number of news stories have focused on the threat that jihadists returning from Syria present.

Authorities in the U.K. and France recently made several terror-related arrests of individuals suspected of links to Syria. …

For the U.S. and Western countries, the returning jihadists pose the biggest long-term concern of the Syrian civil war, the official said. Governments are rushing to counter the new terror threat.

Al-Monitor reported that in the middle of February, the European Union (EU) convened an anti-terror meeting with Middle Eastern governments such as Jordan, Lebanon and Turkey to come up with some sort of early warning system to track potential terrorists returning from Syria.

Since the security agencies of Syria’s neighbors have experience with this phenomenon, the Europeans hope to benefit from their experience in identifying and monitoring potential jihadists before they travel, in addition to the possibility of launching a kind of “early warning system” to identify young Western suspects before Western agencies issue memos about their disappearance. The Europeans are now testing that alarm system in security cooperation with Turkey, especially since the chaos on Turkey’s border made that country the main gateway for fighters.

The phenomenon of jihadists using Syria as a training ground is causing concern in more than just Europe. The New York Times reported earlier this month that returning fighters who were behind much of the terror in Egypt. When Israel broke up an al Qaeda cell a few weeks ago, at least one of the suspects was planning to travel to Syria to train. Australia and Tunisia are also reported to be concerned with this threat.

These are more examples of al Qaeda running everywhere.

For the most part these reports focus on the Sunni fighters. (Iran and Syria must like this as it allows them to pose as friends of the West.) However there is also a strong contingent of Shi’ite, pro-Syrian fighters. Ben Weinthal reported this week in the Jerusalem Post:

According to an article in the Beirut- based The Daily Star last week, officials from March 14 – a largely pro-Western Lebanese political coalition opposed to Assad’s interference – had received security information about new Eastern European mercenaries arriving at the Rafik Hariri International Airport, in groups, on their way to Syria, presumably to fight alongside Assad’s regime.

“According to the one Eastern European country’s intelligence unit, most of these fighters have professional military experience and have fought in Chechnya.”

“[T]his is another example of the difficulties that the EU and its member states have in responding realistically to Hezbollah. The EU’s fiction that distinguishes between ‘political’ and ‘military’ wings left Hezbollah’s infrastructure, including fund raising, largely intact in Europe. This in turn facilitated the recruiting and dispatch of thousands of terrorists from Europe to Syria to fight with Hezbollah for the Assad regime. And given the painfully slow process with which the EU corrects foreign policy mistakes, it is probably too late to avoid further damage, particularly when these terrorists return to Europe.”

In January, Daniel Byman observed at the Lawfare blog:

The Shi’ite influx is also more organized than the Sunni effort. Because it draws on established groups like Lebanon’s Hizballah and Asaib Ahl al-Haq in Iraq, Shi’a fighters are more systematically recruited and deployed. Greater centralization and command and control of pro-regime forces – perhaps Bashar’s greatest asset against the opposition, which has hundreds or even thousands of disparate factions that often do not cooperate and occasionally fight one another – enables the integration of foreign forces more effectively into the existing military structure.

While I haven’t seen much about the threat returning Shi’ite jihadists present to their countries of origin, except Lebanon, Byman warns in the end:

Sadly, and frighteningly, conflict involving Shi’ite fighters are likely to spread beyond Syria. Already, violence in Iraq and Lebanon has surged. More and more, the borders of this conflict do not align with state boundaries. We should expect Shi’ite fighters with experience in Syria to continue to play a violent role when they return home.

Syria is now to Islamists (whether Sunni or Shi’a) what Afghanistan used to be: a place to kill their enemies and to hone their fighting skills. To the degree that they accomplish the latter, the fighters in Syria pose a growing security threat to the Middle East and beyond.

We at Rantburg have a solution to the “Jihadi-come-home” problem.

Make sure they don’t come home. Unless it’s in a pine box, of course.

Sorry to sound bloodthirsty, but it’s a situation in which Joe Stalin’s quote is appropriate: “Death solves all problems – no man, no problem.”

Western democracies need to harden up on this point. If a “citizen” leaves the country to fight in Syria, he ought not be allowed back home unless it’s straight to prison. And if the “citizen” just happens to die in Syria, why, that’s a shame, isn’t it.

Tamp em down solid so that they don’t come back . ( apologies to Ry Cooder )..

There is no reason to let someone who went to Syria to fight for Al Quada, return to this country.

He goes to fight, let his whole family go with him, and the imam, too.No coming back for any of them.

Pulling out of Iraq didn’t end anything; there is a war. The century’s still young, but I nominate Barack Obama for the Neville Chamberlain Award.

That’s quite an insult to Neville. He was just a large naive kid in a grownup world. Jugears knows what he’s doing, why he’s doing it, and what he wants to gain.

You’re correct, there is an a malevolence in Obama and a strong anti-America streak. However, he falls into the group who believe the old adolescent adage that if we could just get rid of the police there’d be no more crime and applies it on an international scale. It’s a poor and dangerous mix for an American president. Nominations are still open, God help us.

LoL. You sure got that right – no shortage of applicants, either.

What happens when they come home? They become ‘Barack Hussein Obama.’

What the whole world is slowly moving toward, whether or not they know it, is another expulsion of Muslims. Every few centuries or so, the West has to purge itself of Islam.

http://www.telegraph.co.uk/news/uknews/law-and-order/10639569/Video-shows-nervous-final-moments-of-British-suicide-bomber.html
From the UK alone, there appear to be significant numbers of young men who have travelled to Syria, it is very scary.