On moral relativism and the university

On moral relativism and the university 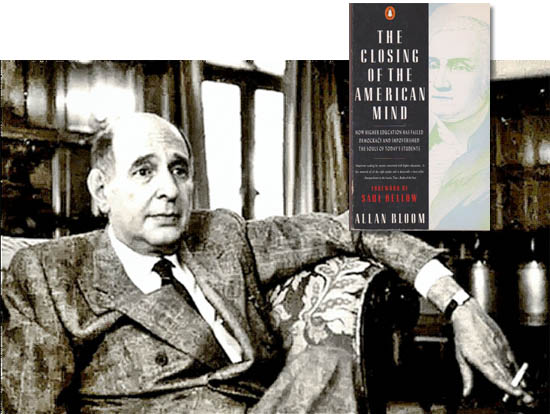 Allan Bloom’s masterwork The Closing of the American Mind is so laden with thoughtfulness that a reader could stop to reflect on nearly every sentence. Plus, Bloom accomplished the extraordinarily difficult task of writing a serious work about education, politics, history, and philosophy in a very lively and readable style.

Here’s an excerpt from the first few paragraphs of his introduction. Remember as you read this that it was published in 1987, and probably was written a bit earlier [emphasis mine]:

There is one thing a professor can be absolutely certain of: almost every student entering the university believes, or says he believes, that truth is relative…

The relativity of truth is not a theoretical insight but a moral postulate, the condition of a free society, or so they see it. They have all been equipped with this framework early on, and it is the modern replacement for the inalienable natural rights that used to be the traditional American grounds for a free society…The danger they have been taught to fear from absolutism is not error but intolerance. Relativism is necessary to openness, and this is the virtue, the only virtue, which all primary education for more than fifty years has dedicated itself to inculcating.

…[O]penness…eventually won out over natural rights, partly through a theoretical critique, partly because of a political rebellion against nature’s last constraints…There was even a general tendency to debunk the Founding, to prove the beginnings were flawed in order to license a greater openness to the new…

Liberalism without natural rights…taught us that the only danger confronting us is being closed to the emergent, the new, the manifestations of progress. No attention had to be paid to the fundamental principles or the moral virtues that inclined men to live according to them…

Note how long ago this moral relativism and the discrediting of the Founders had already hit its stride: fifty years prior to 1987, according to Bloom. In a passage from his book too long to quote here, Bloom describes encountering some of these attitudes from professors at Chicago when he was a student there in the mid-1940s. Thus began his lifelong immersion in the world of the university and the intellect, and his study of how it had fallen.

Even as a teenaged student, Bloom seems to have felt a certain amount of contemptuous anger at those academics who benefited from the achievements of Western thought and culture and ought to have understood their value, but who were so shortsighted as to not realize what effect their throwing out the precious baby and leaving the dirty bathwater of moral relativism would have on the university they professed to revere.

As Bloom’s book goes on, some of its best passages involve his description of the craven abdication of both administrators and professors during the student uprisings of the 1960s, when he was one of those who tried (in vain, as it turned out) to hold his finger in the dyke of the best traditions of Western Civilization against the pressure of the mob.

An incident Bloom describes in depth in his book occurred in 1969. Bloom was a professor at Cornell at the time, and black activist students and their supporters violently disrupted the campus in order to force the powers that be to accede to their demands. That uprising and others were successful, and Bloom later described the situation as one in which students discovered that “pompous teachers who catechized them about academic freedom could, with a little shove, be made into dancing bears.”

It is easy to see how the uprising at Cornell and the administration’s capitulation to it set the stage for the acceleration of several trends that are in full flower today: the general leftward drift of the universities, the hegemony of PC thought, the increasing fragmentation of the campus into special interest groups divided along racial and ethnic lines, and the politicization of the university as a whole. Bloom reminds us that the roots of these movements go back much further and deeper than most people realize.

The relativism is necessary because radicals want to push the idea that if the circumstances are different, the rules should be as well. It is in essence a means of adopting dialectical materialism without ever using that term. http://www.invisibleserfscollar.com/translating-the-off-putting-term-dialectical-materialism-and-discovering-the-intended-process-in-all-classrooms/

Chicago is where the term “behavioral sciences” was first coined in 1948 and George Herbert Mead’s sociology theories indoctrinated many students into thinking like true Marxists without necessarily using the M word. So much of what came to be known as Outcomes Based education came out of Chicago and it is still the philosophy guiding the Common Core implementation now and all the digital learning pushes.

I remember a young man who enthusiastically embraced what he called “situational ethics.”

He had been raised as a strict Baptist, and situational ethics gave him an excuse to dance, play cards, take small bets, hang around with drug users, do drugs…..There was no end to the mischief that was allowable under his new scheme.

Was this all televised?

Statement: There is no Absolute Truth.

Q: Is that absolutely true?

So, it is basically Moral Relativism Vs. Inalienable Rights.

Relativism is naturally directly at odds with “we hold these truths to be self-evident.”

It not only opens the door for moral permissiveness, but also closes it upon claims of natural rights – a necessary precurser to stepping all over them.

That should be “precursOr,” of course. Drat the lack of an edit function – who has time to preview?

I was a young and foolish participant in the Cornell madness of 1969. It was bad, and its consequences persist today. When the Cornell faculty capitulated to the radical leftists, all the conservative faculty in the History and Government departments resigned in protest, leaving Cornell with what one might call an intellectually non-diverse faculty.

The book “Cornell ’69: Liberalism and the Crisis of the American University” by Donald Downs has a comprehensive account.
http://www.amazon.com/Cornell-69-Liberalism-American-University-ebook/dp/B00ANIRML4/ref=sr_1_1?ie=UTF8&qid=1392074813&sr=8-1&keywords=cornell+69

For a comprehensive take-down of relativism, please see this paper by a former faculty member of the Cornell Philosophy department:
https://confluence.cornell.edu/display/ENVIROBAER/Relativism

Believe it or not, the philosophy department is the one place in the modern university where the idea of relativism is not popular. The faculty realize that if one takes the position of relativism, there is nothing left to discuss and they are out of a job.

The article on relativism was used in my friend’s excellent course, “Religion, Ethics, and the Environment”, the lecture audio for which can be found here:
https://confluence.cornell.edu/display/ENVIROBAER/Religion%2C+Ethics%2C+and+the+Environment