Two evidence technicians and the deputy who executed arrest warrant on Dunn. 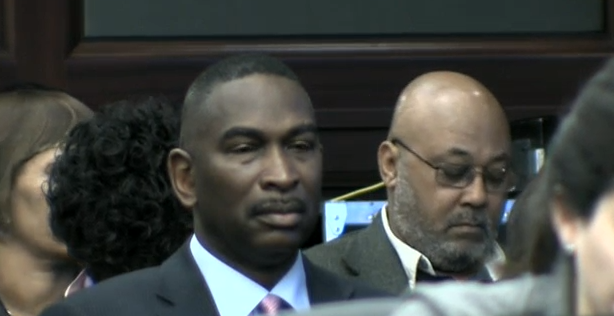 The court moved through three witnesses this morning, including two evidence technicians and the Deputy who executed the Jacksonville arrest warrant on Michael Dunn at his residence the day after the shooting.

Before the trial proper started there was apparently an evidentiary issue that needed to be addressed. There existed a forensics photo that had a portion highlighted. Unfortunately, it was the wrong portion, so a second version was made. In confusion the first photo was admitted into evidence. It only took two highly educated lawyers and a presumably similarly well-educated judge 15 or 20 minutes to figure out how to resolve this difficult. They did manage to do so, however, in a cooperative spirit. 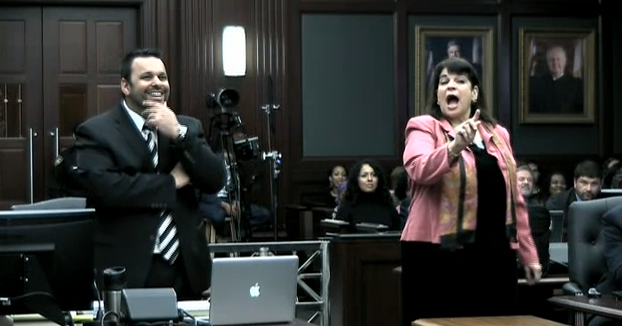 State Attorney Angela Corey would take the lead on the two evidence technicians, before turning things over to Assistant State Attorney Erin Wolfson for direct of the Deputy. 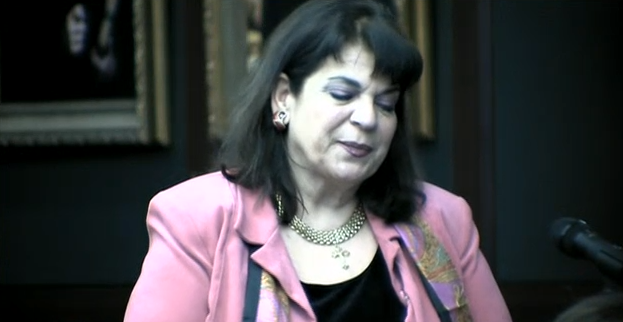 Ron Davis, father of Jordan Davis, was again present in the courtroom. 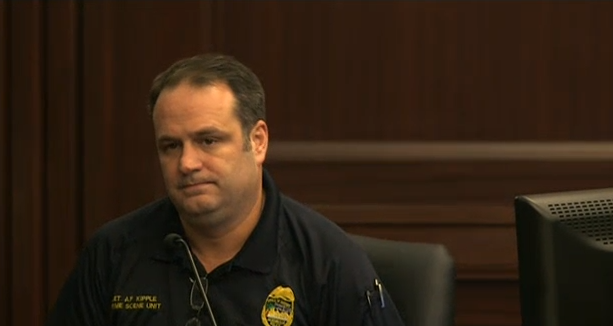 The first State’s witness was Detective Andrew Kipple, the senior evidence technician involved in processing the crime scene and evidence..  His testimony would consume the large majority of the morning.

Corey hit early on a point that had caught many an eye in prior testimony–the fact that the investigators notes taken contemporaneously at the scene had been destroyed.  In questioning Kipple it was made clear that after an officer’s notes are incorporated into an official report, those original notes are destroyed as standard operating procedure.  This appears to be common practice in many departments, and a retired Federal law enforcement officer contacted me offline and confirmed that similar procedures were followed in his agency.

Kipple was the lead evidence technician called to process the scene, and much of his testimony consisted of identifying, and to some degree analyzing, photographs he’d taken at the scene and alter at the crime scene technician’s warehouse.  It was at the warehouse were dowels were used to define the trajectory of the bullets that struck the SUV.

Corey also touched upon the issue of the child-safety locks, discussed yesterday. Kipple indicated that he had no idea of the locks were activated or not, and that such an issue would normally have been left to the homicide detectives.

Corey spent a considerable time on Kipple’s interior photographs of the Durango, which Kipple searched extensively. Repeatedly asked by Corey if he had found any weapon or anything that might have had an appearance of a weapon, Kipple consistently responded in the negative. 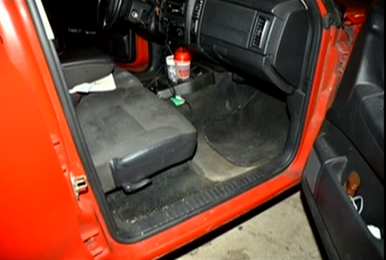 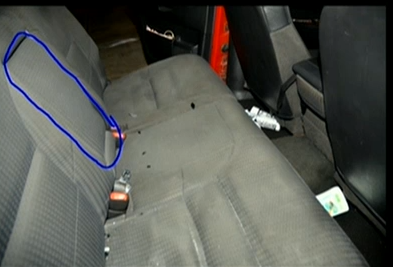 The more interesting of Kipple’s testimony involves the bullet strikes on the vehicle and the dowel work he did back at the crime scene tech warehouse.  (Note that the bullet strikes are numbered for evidentiary purposes, progressing from the rear of the car forward. These numbers have no significance in terms of the order in which the bullets struck the vehicle.) 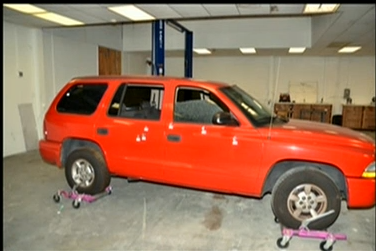 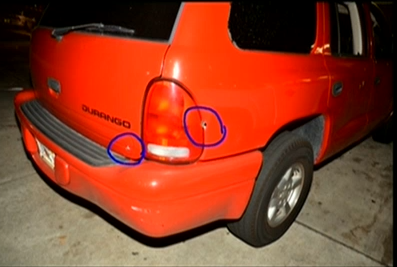 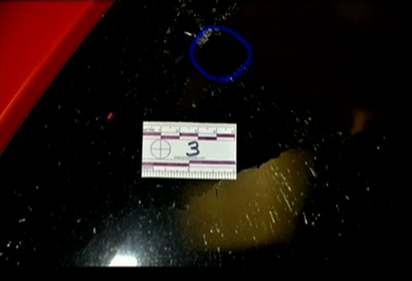 Corey was particularly interested in this bullet, because it’s trajectory carried it from the right-rear corner of the vehicle, traversed the entire SUV, and ended striking the driver’s side visor and window on left-front of vehicle, all at “head-height”.  This will be strong basis for the three attempted murder charges. 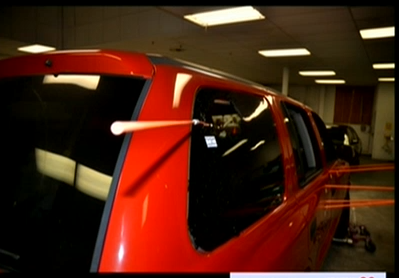 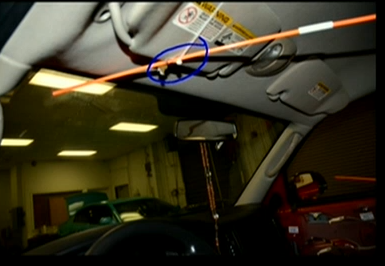 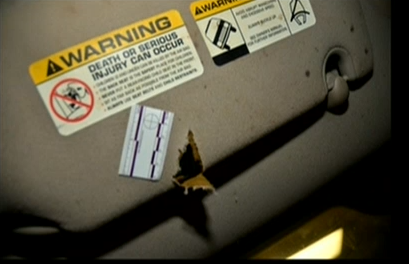 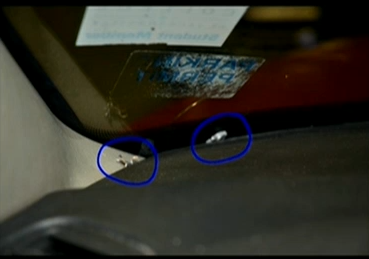 (Fragments of bullet #3 on dashboard.) 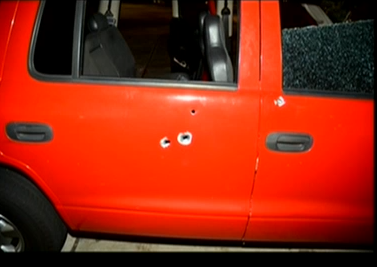 Closeups of these impacts show them very slightly oblong, consist with a drive in an adjacent car shooting slightly backwards. 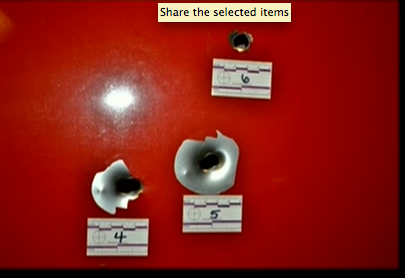 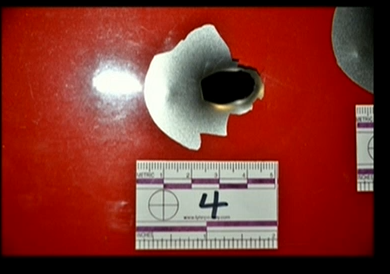 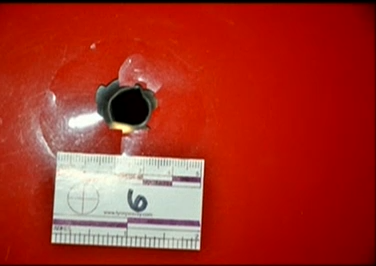 This was affirmed with later trajectory dowel work.  From this photo, taken from perspective of Leland Brunson’s seat, it’s not hard to see how Jordan Davis was struck in each leg and once half-way up in side of body. 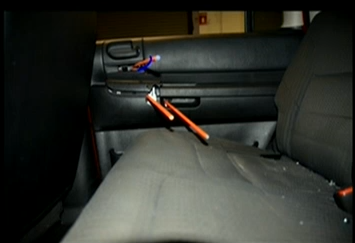 I expect that these were the first three rounds fired by Dunn, and the ones that took Jordan Davis’ life. 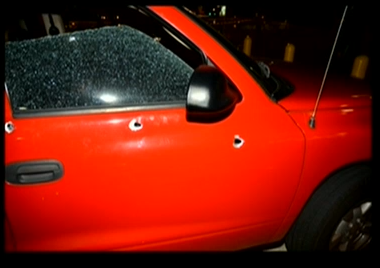 These bullet strikes are substantially oblong, suggesting they were fired when the SUV was substantially further rearward of the shooter. 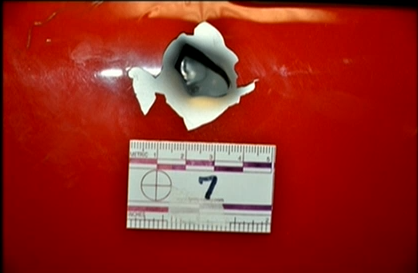 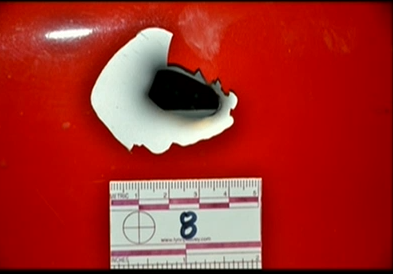 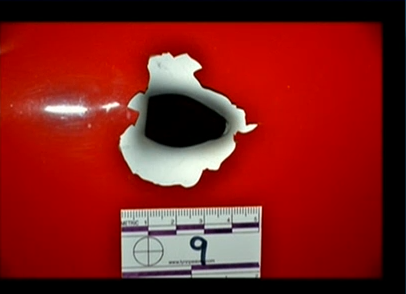 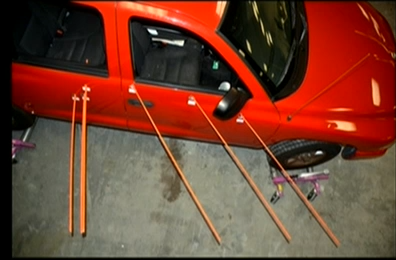 OK, that’s it for the mid-day, as I’m out of time.  Back to live coverage of the trial:

I hope that’s “after” rather than “alter”.

It looks as though the car windows were down when the shots were fired. There is no window damage in #7 8, 9 as would have happened had the windows been down.

Has the prosecution argued that the rolled up windows are an indication that there was no imminent threat?

angles of those last few rounds are pretty important IMO, seems to prove that the supposed/perceived danger was fleeing away.
want to hear defense before I make any judgement calls.

Well here in Chicago the home of the drive by shooting, there are times we here of injuries happening on second or third shoots being fired while the car is already driving away.

The angle of the last three rounds could be very important. Two of the shots are not even in the back they are on the side near the back. The third is just barely in the back. Very significant. Why?

The way people are talking about it the Van is speeding away with Dunn shooting at the back of the van. Implications, when Dunn fired in the back the van was about two, maybe three car lengths away. With the passenger side of the van facing Dunn. Where there were two boy with clear sight and firing range ( for a rifle ) of Dunn.

Is anyone else thinking this guy sounds like a slightly more competent version of Bao?

Wow. All I can say is that after that testimony, if at the end of it all John Guy gets up and says something like “he shoots a boy and then what does he do–orders a pizza!”, and I think his brain is so testicularized that he won’t be able to resist, then the prosecution will lose all credibility in the eyes of the jury and they will acquit. Better have Corey and Wolfson do the closing.

He seems to be trying to claim that one of the passengers had a weapon, and that it wasn’t found because ‘maybe’ the police weren’t thorough.

Given that there was no defensive fire from the Durango and not even weak evidence that any of the boys had a firearm to begin with, much less got rid of one, unless the defense has some huge piece of evidence they’re waiting to drop, I’m thinking this is a slam dunk ‘guilty’ verdict.

On the other hand, defense doesn’t need a slam dunk, all it needs is “reasonable doubt”.

Still an uphill battle, though.

Is Rhonda Rouer sort of an anti Rachel Jenteal?