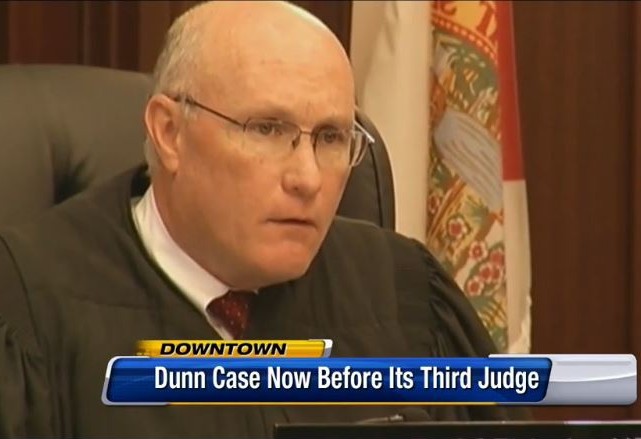 Readers of Legal Insurrection will have noted our ongoing coverage of the Florida “loud music” trial, in which the defendant Michael Dunn is charged with 1st degree murder in the shooting death of 17-year-old Jordan Davis.

The general narrative of events at the scene of the killing is that both men (Davis accompanied by three friends, Dunn by his fiancé) were fueling their cars at a local gas station. Davis’ vehicle was playing music at a sound unpleasant to Dunn—and indeed, forensics photos show a massive set of speakers mounted in the rear of Davis’ SUV—and he asked them to turn the music down. The youths declined, and an escalating and increasingly hostile verbal confrontation began.

Here the prosecution and defense narratives differ. The State essentially argues that Dunn was so enraged by the music that he drew his licensed pistol and shot Davis and his friends, Davis mortally.

The defense argues that Davis and his friends were making explicit deadly threats against him, and he only shot at them when he reasonably perceived what appeared to be a weapon. (No weapon was actually recovered from the vehicle, although this fact is of course not dispositive in a self-defense case, so long as Dunn’s perception of a weapon was reasonable even if mistaken).

Much of the news about the trial, however, has had little to do with either the State’s case against Dunn or Dunn’s defense against the charges.

Instead, rather unusually, much of the last several week’s attention has focused primarily on the Judge overseeing the case, Judge Russell Healey. One might wonder, then, who is Russell Healey in terms of judicial background, experience, and temperament?

The article is, unfortunately, firewalled, so I’ll just touch upon some of the points that most struck me.

First, it is worth understanding the organizational structure of the Florida court system. Small civil cases and criminal misdemeanors are generally handled at the County Court level. The next level up, the Circuit Courts, typically handles the more serious felony criminal cases. Next, the District Court of Appeals handle appellate matters arising in the lower Circuit Courts.

Judge Healey is, in fact, a County Court judge (although he currently is among 23 applicants to become a Circuit Court judge in the 4th Circuit, where he is currently presiding). As such, his experience adjudicating cases has been largely limited to misdemeanor criminal charges and small-time civil matters. Neither type of case, it should be noted, would be of the sort to attract any meaningful media attention.

Currently, the 4th Circuit has two existing vacancies, and had moved a third judge to solely handling civil cases. Furthermore, two other Circuit Court judges assigned to the Dunn case had previously recused themselves, further limiting the availability of Circuit judges for the trial.

As a result, and consistent with Florida practice, a County Court judge was called up to fill the slack—Judge Healey.

While such a posting for a County Court is not unusual, however, such a posting to as high-profile and media-intensive a trial as this one apparently is unusual, especially to a judge with such little actual experience in such a drama-prone setting.

The Florida Times-Union piece puts his relative inexperience in context by noting that the judge who oversaw the Casey Anthony case had been a Chief Circuit Judge before doing so. They also note that Judge Nelson who oversaw the Zimmerman case had been a Circuit Court judge for 13 years before being chosen for that case. (Interestingly, most of her Circuit Court work was in non-criminal cases, and some—including myself—have suggested that this lack of criminal case experience was starkly revealed throughout the Zimmerman trial.) 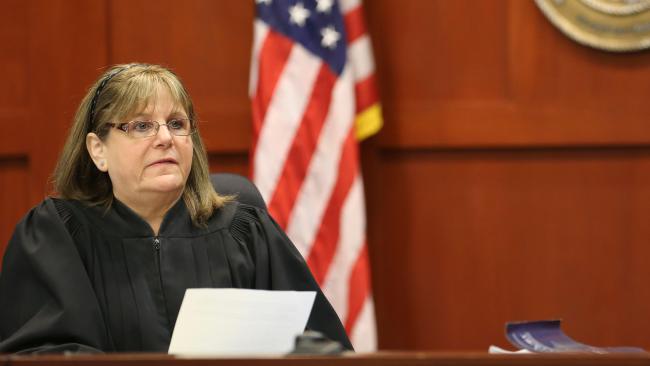 Circuit Judge Debra Nelson, who presided over the murder trial of George Zimmerman

Healey’s rulings on various motions involving the release of discovery evidence to the media have already been smacked down three times by the 1st District Court of Appeals.

His conduct of an evidentiary hearing on the matter that began without the presence of the media intervenors who requested the hearing also raised eyebrows to the ceiling.

Finally, his decision this past Wednesday to toss the entire matter to the civil courts, after having ruled just the prior Friday that the discovery evidence was to be released to the media, has compelled the 1st District Court to reverse his Wednesday ruling (the third reversal on these discovery issues) and order an emergency hearing.

Given the thin bench presently in the 1st Circuit, and with the trial scheduled to start tomorrow, there seems little likelihood that yet a fourth Circuit judge will be assigned to replace Healey.

But, we suppose, in Florida jurisprudence just about anything is possible.

google search
Judge Russell Healey stands firm despite rough patches heading into Dunn trial
and you get full item after asking 1 question.
printed it if needed

For whatever reason, I don’t get that “answer one question option.” Instead it asks me to sign up for a trial access for 99 cents (which of course goes higher 3 months from now).

I have a printout of the piece via other means, but thanks for the offer.

my question was :Is verizon a financial institution?:
LOL 🙂
may be related to me deleting all cookies (ran ccleaner) just prior too.

I get the full article with no questions or any intermediate screen just by clicking the link you provided in the text.

Usually when an article is paywalled, searching through Google News or Bing will lead to the entire piece. Paywalls are designed to catch those who visit the paper’s home page first.

Are you suggesting an officer of the court skirt if not outright violate the law?

BTW going around a paywall may very well be a violation of the CFAA.
Though I think that speaks highly of the poor structuring of the CFAA.

I got it by going
https://duckduckgo.com/?q=Judge+Russell+Healey+stands+firm+despite+rough+patches+heading+into+Dunn+trial

Who does the selection for the judicial call up? Is it random? Thanks for following these.

I seem to recall reading that there is a “certification” process for Florida judges handling serious felonies.

I could be conflating that with a certification for prosecutors, however.

Isn’t Nelson is the 18th Circuit in Seminole County?

Quite right, aloysius9999, my error. The post’s been edited to remove the reference to Judge Nelson.

Dunn deserves a judge with crimnal experience. His life is on the line.
Judge Healey’s trial by fire is not working out. Retrial in the offing.

Prior to having the case dropped into Judge Healey’s court it’s stated “two other Circuit Court judges assigned to the Dunn case had previously recused themselves”. Is it known what circumstances or reasons why the other two judges took a pass on this, other than reaping the media oversight as did Judge Nelson as she bungled her way through the criminal trial of George Zimmerman.

I’m no lawyer, but a 1st degree charge seems absurd.

Was not the ‘yoot’ here already committing a misdemeanor offense by violating the noise ordinance? The loud music thing, perped overwhelmingly by blacks, is inherently an aggressive, anti-social behavior. That’s why there’s laws against it.

And then was he not guilty of menacing and communicating threats?

Are those acts considered misdemeanor or felony in FL?

My point is the poor ‘victim’ here seems responsible, perhaps criminally so, for provoking the whole thing.

If he had not been in violation of FL law in the first place none of this would have happened.

So I don’t see first degree–heck, I don’t even see a conviction.

1. I agree about 1st degree and suspect the prosecutor overcharged to get a plea deal.
2. According to the reports I heard. Dunn complained. Davis turn down the music. His freinds started arguing and someone else turned the music up. So I think it’s unfair to compain about Davis’s antisocial behavior.
3. In Chicago it was mainly young hispanic males, and the biggest group by young single white, males in recently acquired 6 figure jobs who don’t give a flying f about the rest of the world that play music in their cars loud. Usually the whites are waering bigf flashy rolexes too.

Frankly I think a combination insanity/self defense argument would be best. The loud music angered and annoyed Dunn so much that he was made temporarily insane and he imagined seeing a gun.

Who benefits from this situation?

And O/T, just for the record – Go Seahawks!!

Actually did the DCA overturn Judge Healey’s last ruling?
They took the matter out of his hands and put it into the hands of a civil court judge. Isn’t that his ruling?

Andrew, Amy, Rags, Mouse… Hey, it’s like old times in here! 🙂
Hadn’t heard of this case until I saw a news report on it tonight. Sure can’t see how it is being called the “next Zimmerman case” except it is in Florida and has the same idiot prosecutors. Doesn’t look too good for this guy.

Anyway, just wanted to say HI! to all you guys I spent so much time with during the GZ trial.
I can’t believe I was getting up at 5:30 every day to watch that trial. LOL.