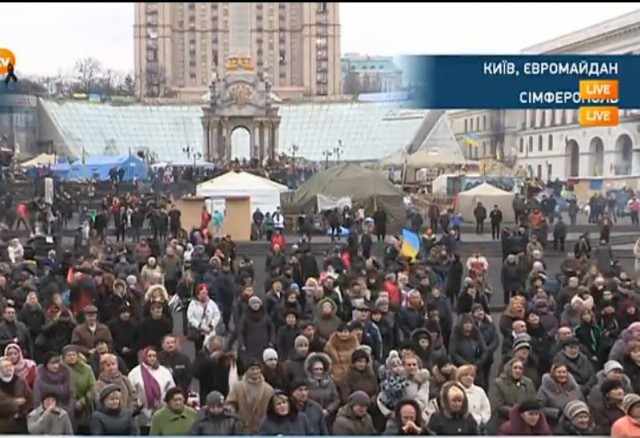 There have been some developments in Ukraine since late yesterday.

In Crimea, armed gunmen seized the regional government headquarters and parliament buildings and raised the Russian flag, according to Reuters.

Armed men seized the regional government headquarters and parliament in Ukraine’s Crimea on Thursday and raised the Russian flag, alarming Kiev’s new rulers, who urged Moscow not to abuse its navy base rights on the peninsula by moving troops around.

“I am appealing to the military leadership of the Russian Black Sea fleet,” said Olexander Turchinov, acting president since the removal of Viktor Yanukovich last week. “Any military movements, the more so if they are with weapons, beyond the boundaries of this territory (the base) will be seen by us as military aggression

Ousted President Viktor Yanukovich is said to have been “granted” protection inside Russia.

MORE: Ukrainian president says in statement that he still considers himself to be the legitimate leader: http://t.co/JMIHQYykiH — The Associated Press (@AP) February 27, 2014

This might not be a popular position to take, but I think Ukraine needs to make overt assurances to Putin that they will not interfere with the Russian bases in Crimea.

Maybe even voluntarily cede Crimea back to Russia. Whatever it takes to keep Ukraine from splitting in half…or worse.

I mean, who’s going to stop them? Since Obama took office, the country that has been the most aggressive in defending western interests is FRANCE!

I’ve seen a report that Crimea’s parliament has dissolved itself. New elections set for May

Crimea isn’t very Ukrainian, in part because the local Russian authorities tend to close Ukrainian schools and media. Getting rid of it wouldn’t be horrible, but in this context I think offering to off-load it would only whet the bear’s appetite.

Speaking in parliament before he was appointed head of a national unity government, Mr Yatsenyuk said that in the past three years “the sum of 70 billion dollars was paid out of Ukraine’s financial system into off-shore accounts”.

Only the past 3 years? What about prior to that when he was finance. Minister?

They are all thieves.

Raising Russian flag in place of Ukrainian flag in Kharkov for 5 hours:
http://vesti.ua/harkov/39677-v-harkove-snjali-flag-rossii
By the way, just can’t figure out Crimea, who lives there and who speaks what language. Crimea is 60% Russian; Stalin removed ethnic Tatars and replaced them with Russians, then Khrushchev “gifted” it to Ukraine. Ukrainians in Crimea are among the most pro-Russian Ukrainians in the country. But 12% and growing are the Muslim Tatars. As far as I can tell, the Tatars are currently on the Maidan side. Not sure if they still do it, but I remember Crimean Tartars self-immolating in the 80s. I say give Crimea to Putin and let him chock on it.
I highly recommend this blog for boots-on -the-ground reporting and commentary:
http://grahamwphillips.com/2014/02/25/insane-ukraine/

Concurrently, a Russian navy ship has ported in Cuba.

We need to get Obama into counseling, stat. He’s being bullied.

So any idea on how long it will be before Putin rushes Russian troops in to ‘restore order and protect property’ in this strategic national interest of theirs? If they need some attacks staged on Russian citizens in the country or some buildings burned to provide a fake reason, I’m sure the assets are already in place just waiting on the word. Because that looks like the way these events are going to pan out in the end.

No need for the USS Mount Whitney (LCC 20) & USS Taylor (FFG-50) to leave the Black Sea. Here’s a chance to improve ties w/Turkey, who have no love for the Russians. Maybe a port visit to Odessa by an SSN …