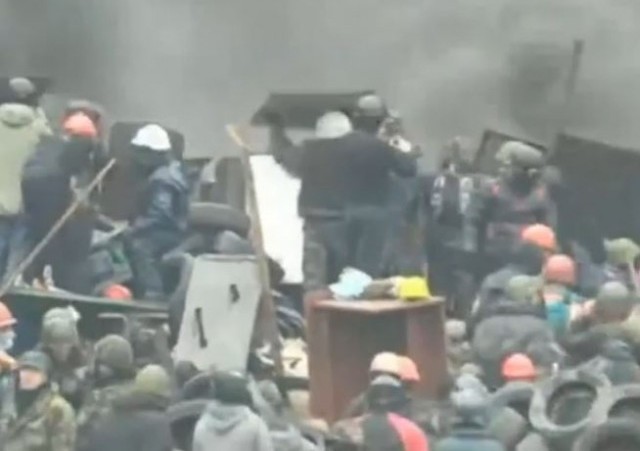 A shaky truce crumbled in Kiev Thursday morning, when gunfire erupted at the city’s Maidan, or Independence Square, which has been ground zero for anti-government protesters.

It’s unclear what prompted the gunfire. But CNN crews at the scene reported that as security forces were moving away from the area, a group of protesters pursued them, throwing rocks and Molotov cocktails.

“Protesters broke the truce,” said a statement from President Viktor Yanukovych’s office.”The opposition used the negotiation period to buy time, to mobilize and get weapons to protesters.”

When the bullets flew, several demonstrators fell to the ground.

Live feeds and other video footage show clashes between protesters and police forces and footage of the scenes on the ground.

Anyone who thinks the Russians will let go of Ukraine without bloodshed is simply mistaken. If they don’t get their way through collaborators and immigration, the tanks will roll in, just like Georgia.

Yes the they drove the Georgian attack out of Ossetia & the Georgians ran way . The road was clear to Tbilisi but the Russians went only as far as Gori . There they had some pics in front of Josef’s statue & meandered back to Ossetia.

I have always failed to get the outrage. Skirmishes happen . ( maybe you should drive the Mexicans back ) .

It has been reported the protesters are mostly Svoboda Neonazis. What’s the truth of this?

Meanwhile, in Venezuela the killing continues.

We need to get some classically trained highly professional American journalists there on the ground so we know what not to believe.

Although I’m hardly thrilled with your choice of “Edge of the Sandbox” as a commentator, thank you Professor for your coverage of these events.
Some commentators have talked about a “democratically-elected” regime. In fact, Yanukovych owes his parliamentary majority to gross violations of the constitution (getting deputies elected on a party list to jump ship with bribes/threats). He has virtually destroyed the free press(in the east it’s a total lapdog), stolen billions, enabled Russian thugs to attack Ukrainians in cities like Odessa, made war on the Ukrainian language, and threatened the livelihoods of opponents. Just like Putin, actually. And don’t forget the poisoning of Yushchenko, in which Yanukovych was involved. It is ludicrous to talk about democracy under those circumstances.

Nobody’s saying that Yanukovich is anything other than a crook and a Putin’s puppet. I doubt anyone one here wants to see Central Europe surrendered to Putin. The question is the character of Ukrainian opposition and whether or not the Maidan represents majority of the country.

It couldn’t be those government snipers who started shooting, could it? Surely, nothing like Ruby Ridge could happen in Kyiv. (/sarcasm)

Putin has a friendly dictator protecting his western border in Belorus. Now he needs Yanukovych to secure another portion of his border. Soon, western thought and ideas will be just a tawdry memory in the resurgent Soviet Russian Empire.