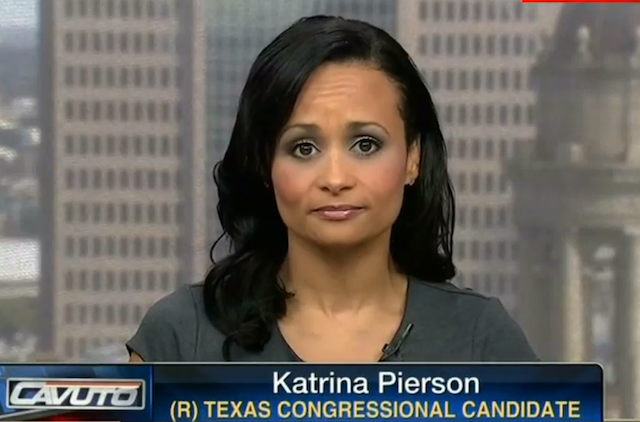 A relative political newcomer has made her way onto the scene in Texas, promising to bring national attention to the 32nd Congressional district Republican primary.

17-year incumbent, Pete Sessions, has recently drawn fire from a number of conservatives and Tea Party leaders who believe Sessions has become out of touch with the desires of the many conservatives he represents.

The Tea Party movement may have found its alternative to Sessions in Katrina Pierson.  Amy Kremer, Chairwoman of Tea Party Express, recently spotlighted Pierson in a piece over at Rare.

[I]t is Katrina’s incredible story that should make her so valuable and inspiring to a Republican Party seeking to reach more Americans. Born into poverty, Pierson’s mother was only 15-years-old and her upbringing was certainly less than ideal. When she got into trouble as a young adult after a friend encouraged her to shoplift, she was caught and didn’t have much hope.

But instead of giving in, she saw a fork in the road. She had a choice of taking the easy flat road or climbing the hill, taking a more winding and challenging road.

She could have taken the flat road that led to the cyclical dependency on government, but instead she gave it her all. She wanted to give her child a life better than what she had. She put herself through college and earned a degree in biology. Most recently, she worked as a healthcare administrator at a level I trauma hospital. Soon, she will be sending her son, who is now 17 years old, off to college.

Katrina did what we would all hope to do when faced with adversity. She overcame.

Pierson has already received some high profile endorsements from the Tea Party movement, including Sarah Palin, who called Pierson a “feisty fighter for freedom.”

We don’t know a great deal about Pierson, but her entry into the primary contest — less than two weeks away — could shake up a district that has remained in the same hands for nearly two decades.

The race draws attention to the difficult challenge facing GOP candidates and voters in traditionally “safe” Republican districts. Do you stick with what has worked in the past, or do you give the newcomer a shot knowing it could cast doubt on the outcome of the general election?

Regardless of where you come down, Pierson at least deserves a fair look from the Republican voters. Something that Amy Kremer points out might have been easier had the media dedicated more focus to Pierson’s run.

You would think that a young, conservative, black single mother who made a name for herself by fighting to elect Ted Cruz to the U.S. Senate would be a cause celeb for conservatives.

You would think that the conservative media would want to profile her or give her some kind of coverage, just as BET (Black Entertainment Television) has.

You’d think, but you’d be wrong.

Here’s Pierson on Cavuto talking about why she’s challenging Sessions.

Good article on an excellent candidate. Though in Texas,not in her area, I am doing what I can to help and support her and urge other conservatives to do the same.

But let’s vet her story some more, lest we have our own version of a Wendy Davis.

I’ve known Katrina personally since the Tea Party began in Dallas and worked alongside her on various campaigns. She’s the real deal. Please help out and chip in if you can.

silly teaparty can’t support her, dontcha know about the war on wimyn? besides, she don’t look white, do she vern?

What you talking about, Willis?

I think that it is good. She may not win, but if she doesn’t, but does well, she will likely throw a scare into the incumbent. The establishment Republicans, esp. in the House, seem to forget that they were able to retake that chamber thanks to the Tea Party. Having to face a primary challenge every couple years may be enough to make a lot of incumbent Republicans less likely, and less quick, to sign on to the legislation pushed by the power brokers inside the Beltway (such as, more recently, immigration “reform”). Of course, it doesn’t always work – as evidenced by Orin Hatch, who survived a primary challenge, won reelection, and is even more in bed with those power brokers – but that is the Senate, where he won’t have to face his constituents for another 4 1/2 years.

I think it is arrogance to presume that incumbents of whatever stripe should not be primaried. The worst thing for this country is to run unopposed. “Oh but we like our Representative/Senator/public school district….” Laziness, complacency, entitlement-mentality: fie on it all! Good for Katrina Pierson. Good for Texas.