“Why could we not expel a student based on an allegation?” 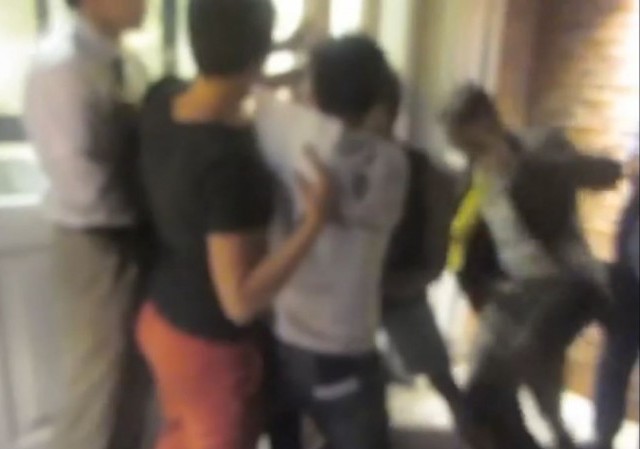 Prof. KC Johnson, best known for his investigative work regarding abysmal university and faculty handling of the Duke Lacrosse case, has a post at Minding the Campus regarding a disturbing appointment at Dartmouth, ‘Why Have a Hearing? Just Expel Him’:

“Why could we not expel a student based on an allegation?” That astonishing question was posed at a conference on how colleges respond to sexual assault issues by Amanda Childress, Sexual Assault Awareness Program coordinator at Dartmouth. According to Inside Higher Ed, Childress continued: “It seems to me that we value fair and equitable processes more than we value the safety of our students. And higher education is not a right. Safety is a right. Higher education is a privilege.”

Give Childress credit for candor–even the campus spokespersons for increasing the number of guilty findings in campus tribunals usually aren’t so bald in their disdain for basic principles of due process.

Childress’ jarring remarks coincided with news that Dartmouth had promoted her, and given her additional power over the college’s sexual assault policies. Last Friday, the college announced that Childress will head the newly-created Center for Community Action and Prevention, which Childress said would “be the focal point on campus for Dartmouth’s sexual assault and violence prevention initiatives” and “drive the College’s mobilization efforts around preventing sexual violence and increasing the safety and well-being of all members of our community.” (All members, it seems, except students facing unsubstantiated allegations of sexual assault.) Incredibly, Dartmouth theater professor Paul Hackett suggested that despite Childress’ appointment, the college isn’t going far enough on the issue.

To reiterate: one of the nation’s elite colleges thinks it’s a good idea to enhance the power of a figure who wonders about the propriety of expelling possibly innocent students based solely on an allegation.

The victims of these ideologically-driven star chambers almost always are men.

Prof. Johnson notes a troubling case at Swarthmore, one in a long line of alleged campus witch hunts against men gone bad:

The Swarthmore lawsuit, first reported by Philadelphia, shares similar characteristics to suits filed against Vassar, St. Joe’s, and Xavier–but with one interesting twist. According to the filing, the accuser waited 19 months to file her charges (she never went to police or had a medical exam); the weakness of her case was such that even Swarthmore’s biased disciplinary system didn’t bring charges against the accused students. But two weeks after the Title IX complaints, Swarthmore reopened the case–and within less than a month, had completed its investigation, held a hearing, and completed the expulsion. The lawsuit alleges that Swarthmore failed to respect what passes for due process on the campus; the student’s attorney claims that Swarthmore didn’t give the student a right to respond in writing to the charges, among other things.

It’s time for universities to get out of the prosecution business.

Sexual assault is a crime. If a college student — female or male — believes she or he is the victim of sexual assault, the remedy should be filing a police complaint. Only at that point should a university even consider expulsion or other discipline, and not as punishment (until the criminal case is resolved) but exclusively for the protection of other students (as for any other violent crime) and only with a strong measure of due process.

Would the term “Feminazi” fit?

Never! Do you think about what the Nazis did? (It’s rhetorical). Gunnazis actually fit the conflation much better. Their actions result in people being killed. Thank you Michael Dunn for illustrating the point. Most victims of Gunnazis die in obscurity.

Oh, NOTHING like the multiples more victims of Femi-nazi industrial death.

Say, moronic troll, why don’t you take a stab at defining “Gunnazi”, especially as framed in the case of Mr. Dunn.

Which is the OPPOSITE of your Collective (including the Nazi branch of the family tree). Like you.

Or are you so stupid you confused “felonious killer” with “Gunnazi”?

Pretty much in line with the Collective’s war on men, and due process rights.

I think maybe Robert Stacy McCain has this one pegged as regards feminist roots.

The best response I can think of is paraphrased from Political Correctness Watch:
“American “liberals” often deny being Leftists and say that they are very different from the Communist rulers of other countries. Their only real difference, however, is how much power they have. In America, their power is limited by the Constitution. To see what they WOULD be like with real power, look to where they ARE already powerful: in America’s educational system — particularly its universities and colleges. There they show the same regard for free-speech and individual rights that Stalin did: Zero.
So, look to higher education to see what America would be like if “liberals” had their way. It would be consumed by a nightmarish tyranny.”

I am only interested when they suicide & leave a nasty note. Otherwise Fail.

The modern university is a window looking into the future of a country (a word which will be banned because of the sound of the first syllable) run by leftists. Future history right before our eyes. Just look.

The “arc of history” suggests to me that we cannot live with people like these.

They won’t let me live as I choose, and they are not amendable to letting their doctrines go.

The face of fascism.

Wow. Expulsion on a mere accusation? That go for faculty too? If so, this is great! This is how we’ll clean out our public universities!

Henry, I guarantee you that Dartmouth theater professor Paul Hackett will change his mind one second after he himself is accused of a sexual assault on a student…

Didn’t she get the Democrat memo? The one that says a college education is a right that taxpayers are obliged to pay for — a right that those who opt out of college must subsidize for those who choose to attend?

Let’s all quote Ms. Childress on how “higher education is a privilege” next time another leftist deplores the terrible fact that college isn’t “free” here like it is in other countries.

Also, once the tuition is paid, doesn’t the student in fact have a contractual right to education?

Why are colleges dealing with potential felonies? What expertise have they in criminal matters, evidence collection, questioning of witnesses, and such?

Universities should, by law, be compelled to have city police deal with matters of criminal law so that the rights of the defendant and the complainant can be secured.

All universities have done is to turn young girls into ultra sensitive womyn and equate manhood with predacity.

It is a patchy network but is definitely beefing up . Unlike the pushover at MIT who practically handed over his gun ,other campuses have bought full military vehicles. ( Ohio ) Some eg Tulane have extended the perimeter of their control . ( ok it is NO & a wise move ) .

Top of the pops is a nappy headed ho called Janet , now head of UC .

There has been a few trial balloons trusting the waters.

Some will be sanctuary cities all their own soon & little fiefdoms .

“nappy headed ho called Janet” Congratulations! You may have been banned by the Gauardian, but you will be right at home here. Here, all will cheer each others simplistic, caricatured beliefs and boo any dissenting opinions. But they are not walking in lockstep like brain dead liberals. They just happen to reach the same opinion by individual thinking.

You can define all alternative views as leftist. Then you can claim that all leftists think alike. Then you can dismiss that stereotype as being ridiculous, totalitarian or any other derogatory term that pops into your head. “nappy headed ho” clearly shows you as original, witty and thoughtful.

Lastly, everybody else can congratulate you!

The pendulum may well have swung to far. But to deny, or be ignorant of, where the pendulum started makes it impossible to reach a reasonable place. You just might want to think about how we got here. Of course not.

Now the chorus is welcome to attack me with the usual stale rhetoric. Go for it. Don’t for one second think about what I am saying. But, please see if you can come up with something original. I am getting bored of the usual recycled terms. That seems like the only recycling that people on this site will support. Do you guys have a usage guide for abuse and denial?

Just trolling. You know you shouldn’t do that, right?

Narcissism from someone self-named as “Rational”?!!!

In this context of campus jurisprudence her inclusion as UC CEO is very apt .

I’ve been making the case for decades that Institutions of Higher Learner view themselves as sovereign, separate and apart from society.

Heck, they could darn near be taken over by communists/marxist and nobody would even notice!

So, why would a young man want to go to college, any college? Outside of engineering, the bachelor’s degree is worthless. Even in the sciences you need a Ph. D. to get a job (if you can). LLD’s and MBA’s don’t do you much good either, unless their from a top ten school. Virtually every college and most universities have degenerated into mediocre girls finishing schools, moreover finishing schools that don’t measure up to 19th Century standards. Can the girls speak French, or draw, or play an instrument, or sew …? What good is an illiterate, unskilled, self-absorbed, overly sensitive parasite?

What is clear is that men need gender-segregated education all the way from pre-K to Ph. D. This includes the teachers and the supporting staff. If men want female companionship, they go into town and rent it like their forefathers did.

Of course, men are responding rationally to incentives. Kenyon College, all male in the 1960’s and now nominally coed, has an admission quota for males: the freshman class must be at least 45% male. Walking around its campus, it is clear the quota is just barely being met.

Former all-male schools like Kenyon depend heavily on gifts from former alumni (i not ae), so what will happen to their finances as the old boys die away?

Were I asked to advise on this and like phenomena — I am not — I would suggest, “Step aside and let it go about its way.” Fear not, anger not. Dartmouth is a big adult who can take care of their self. Let them sort it out. They will get it right. Same for any of these schools. And use such phenomena to learn the principles of life. Systems which go hard are molting.

And meanwhile, steer clear of Dartmouth and any other school run by harpies. Seems simple enough. The RRs need Locomotive Engineers and Conductors. So do many other infrastructure concerns.

Hey Rational, what do you do for a living?

I say that Amanda Childress consorts with the devil and practices Satan rites including witchcraft. As a part of this process she has abused children sexually. I have seen her doing so.

Now that there is an accusation against her, can she be suspended for the safety of the students?

Let me get this straight:

–actively and financially support the boozed-up, hook-up culture that creates the environment for ubiquitous non-consensual situations

But the way to solve all this is to deny due process to accused male students who could very well be innocent?

Great points that I had not connected with this.

I guess the rule on campus is: Everything goes until “we” say it doesn’t.