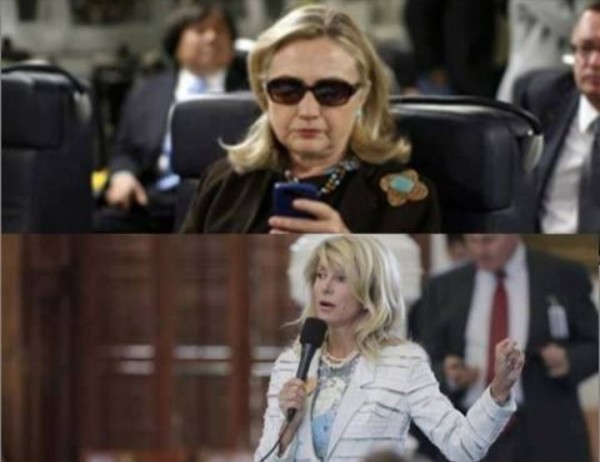 Wendy Davis has inspired some Texas-sized hype after her pro-late term abortion filibuster.

That hype has hit the rocks of a busted personal narrative, a bizarre media strategy, and a “deja victim” attitude.

But some true believers still believe.

Like the author of this column, Hillary Clinton and Wendy Davis could be the 2016 Democrat presidential dream ticket:

If elected, Hillary Clinton would become the first woman elected President of the United States. Adding a woman as running mate could energize women all over the country, but particularly in the south.

The logical choice for a variety of reasons is Texas state senator Wendy Davis.

Doesn’t she have to get elected governor first?

Of course, but Davis is now getting herself positioned as a very strong candidate who could loosen the Republican stranglehold in Texas of Republican governors?

Davis is scaring the “beejeezes” out of her competition as evidence by the opposition research out there trying to derail her candidacy.

It is not working and signs are it is backfiring in Davis’ favor.

A Davis victory in Texas will certainly intrigue Hillary Clinton. The geographic possibilities are enormous. If this “red state” indeed turns purple in 2014, that would tip the election to the Democrats far into the future. The 38 electoral votes in Texas (up 4 electoral votes from 2010) are low-hanging fruit with Davis on the national ticket.

It is for that very reason that Democrats will flock to Texas to give Wendy Davis a helping hand, not so much for winning in Texas, but for the national implications of controlling the White House for four more years, with an option for another four.

There is a big “what if” in that equation, namely Davis winning the Texas Governor’s race.

What possibly could go wrong?  Other than everything.

Never in a million years would Hillary choose another woman as her running mate. It would instantly undistinguish her for any first woman category, and just look at Hillary’s female friends. Right, she has none. The woman does not relate well at all to women. They have always been her undoing, from Bill’s long list of paramours to Hillary never wanting to be the kind of woman who stayed home and baked cookies.
Anyone who has the notion that Hillary would entertain a female running mate hasn’t paid any attention to Hillary the past thirty years.

Bill is salivating over the idea…

… and Sarah Palin as debate moderator

I so agree. Especially one like her. They would cancel each other out.

I so agree. Especially one like her. They would cancel each other out. Sorry, I accidently replied to another post; but meant to post to you.

Sorry, I am confused tonight. Now, I am sorry for posting twice.

LOL Thanks for making me feel better.

We ain’t going to have a Mommy Dearest governor.

I see what you did there, with the silent coat hanger reference. Very nicely done.

Can I have some of what they are smoking? Texas could handle Ann Richards. She was pro 2nd amendment, she didn’t bleed stupid, and if she hadn’t let the BATF/DOJ and Janet Reno mishandle Waco she might have salvaged her dignity and reputation.

But Wendy “I haven’t got a brain” Davis? BWAHAHAHA. She won’t get a vote outside the urban centers, and she won’t win any of them outside of Austin proper, and certain “managed” districts in Houston.

Huh? The Ann Richards who vetoed the 1993 concealed weapons bill with the childish rationalization that there was no woman in Texas who’d be able be find a gun in a cluttered handbag?

Yeah, when it came right down to it, ol’ Ma Richards was true to her left-wing, Austin roots.

Ah…as the “personal narrative” fails they move to Plan B: “A vote for me is a vote for Hillary.” Yeah, that’s the ticket…Plan B for Abortion Barbie.

From my perspective, that running ticket would be good news.
You know, like in the Donkey not winning the race.

Hillary/Wendy ticket? Not a snowball’s chance. Hillary’s ego is far too large to share “gender credit” with anyone.

Not sure that metaphor works any more. Wasn’t there snow in Houston a few days ago?

I am not delusional. Wendy wins in Texas. We may write a country song, “Don’t it make my red state . . . blue.” Feel free to hum along along.

I rather suspect if Hillary wins the nomination (no sure thing, she was a “lock” last time, too) she will look for a running mate who “balances” the ticket by being her exact opposite.

So: male, current or former Governor, from outside the DC-Boston corridor, accomplished, personable, and honest.

This balances the ticket geographically.

“All hat and no cattle.”

She has as much substance as a fart in a west Texas windstorm.

Don’t agree, she has plenty of cattle.

You’re just judging by all the bullspit…

It is not working and signs are it is backfiring in Davis’ favor.

As Nixon so famously said, will it play in Plano? I’m thinking the answer is a decided no. A lot of mothers will be suspicious at best of a woman who will abandon her children.

It would admit of some creative slogans.

Huma would veto that deal in a nano-second.

Clinton’s VP will be Elizabeth Warren, heir apparent for the post-Clinton era WH (in their minds and plans). That’s Warren’s pay-off for announcing so early she’s not running in 2016, which freed up donation money which Clinton is currently amassing. By January 2016, Clinton hopes to have serious competition sidelined and a stranglehold on campaign money.

That would be a plus for both!