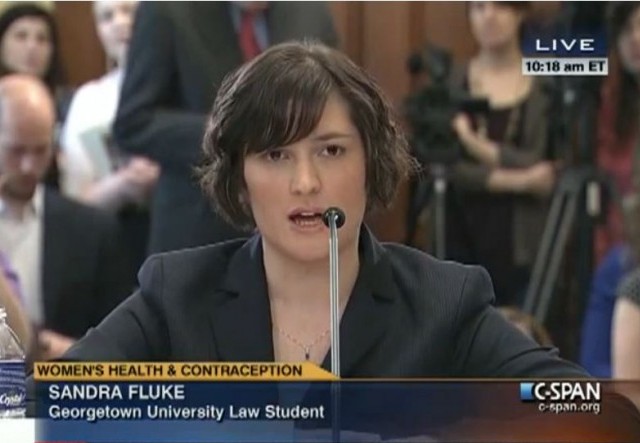 Sandra Fluke made headlines when she filed to run for Henry Waxman’s congressional seat.

Now she’s decided not to run and will run for State Senate instead, via L.A. Times:

Democratic attorney and activist Sandra Fluke has decided against running for retiring Rep. Henry A. Waxman’s congressional seat, instead planning a bid for the state Senate.

“I am extremely moved by the outpouring of local and national support I have received since I announced that I was considering running for office. My entire career has been devoted to the public interest, whether representing victims of human trafficking or advocating for working families,” Fluke said late Tuesday night. “I am committed to continuing that fight in Sacramento, working to protect our environment, ensure our access to health care, and create the jobs that are desperately needed. While I strongly considered offering my candidacy for Congress, I feel there is a better way for me to advance the causes that are important to our community.”

It does make sense if she wants to accomplish her objectives. California is completely dominated by liberal Democrats. The state treasury, or what’s left of it, is hers for the taking.

And may they live happily…and delusionally…ever after.

Or until they go completely broke.

California is pretty much 55-45, except when it comes to social issues. The California Republican Party kept hammering on abortion until they took away its hammer.

Think of it as evolution in action.

Now, the Republicans are coming back, given the rich target environment on economic issues. Sandra Fluke is an idea candidate (for Republicans) if opposed by a Republican who doesn’t provide her a foil.

I know it’s fun to laugh at loony CA, but 1) there are more Republicans here than in any other state, and 2) it’s warm here in January.

“My entire career has been devoted to the public interest…”

Career? What career? Fifteen minutes of fame does not a career make, Sandy.

Anything is possible when you are a post-modern thinker. All you have to do is create the narrative, and the unicorns take it from there!

She should write her memoirs.

She could title it Condomnation. Except that has already been taken.

Feeding at the public trough and completing the ruin of CA. If they vote for her, they deserve it. Since CAians haven’t learned from Detroit, they deserve all they get.

My entire career has been devoted to the public interest…????

She’s been a feminist activist and community organizer since her college days. I suppose you could call that a career…

Your headline is perfect! Her entire, ahem, career is based on “in and out.”

I thought it sounded disturbingly like a partial-birth abortion…

Your description is stomach-churning but it is accurate.

I was thinking that it sounded more like “coitus interruptus” myself, given that she couldn’t afford her birth control at $9 per month.

Sounds like the state party big-wigs told her they weren’t giving a safe seat to a noob. There are probably several people who have been waiting years for Waxman to retire or die so they could take his place.

Whoever wins will be able to stay in D.C. as long as they want. You gotta pay your dues before they let you take a job like that.

I’m sure they could have been ‘bribed’ as Sandra knows how to ‘play the game’ … no paper bag required.

Are you okay? She probably gets paid to promote Viagra and Cialis. All she has to do is be seen and guys are calling their doctors.

Having one date with her has a guy calling the doctor too.

At least Obamacare covers the treatment for “Nasty Womens Diseases”

Looks to me like she’s another casualty in the War On Women.

I think you’re dead on. Whoever gets the party nod is a lock for the seat. It isn’t like Waxman’s seat is any more valuable than any other safe seat–it won’t bring with it the seniority that Waxman enjoyed–but there are only so many of those that open up and I would expect them to be handed out as a reward by the party. I’m sure Republicans would do the same.

That doesn’t mean I don’t believe in insurgent candidates. Parties should be loyal to their faithful. Voters should vote their best interests.

On top of which, she only views the seat as a stepping to something in short order. Four or six years from now they will be looking for someone new to replace her as she runs for something else.

I think that’s right. Ms. Fluke hasn’t yet paid her full allotment of dues. She’ll get a safe state senate seat and continue her time on the bench.

As I said last time we talked about her, the Democrats work very hard on cultivating a deep, deep bench of activists. Some of them flame out, some of them lose interest, some of them are so goofy that the leadership abandons them, but some of them, cultivated for a long, long time, pay off. A few pay off big.

Sandra Fluke is a nobody. Follow her career to date and you’ll see the guiding hands of the progressive Left grooming her. She’s been a feminist, an ‘activist’ and a law student (where did she get the money for that, I wonder). She’ll be prepped and prepared until the day comes when she cashes in. Ms. Fluke’s “career”, as you would have to call it at this point, needs more of that cultivation. She’s not quite ready for the big time. If she sits in the state senate for a decade or so, builds a lot of connections and chits, and waits her turn, then she can get a seat in Congress. Or run for state-wide office. She can get a safe, high-paying NGO job at some point to build her financial portfolio (no Reynolds revolving door tax, alas). Then back to government. Maybe a spot high in DHHS if Hillary wins.

Remember, this is how Democrats play the game. It’s one of the things the Open Society, foundation, union and NGO folks do best — find and groom people who can then be put into elected office or political appointed office. Who then do as they’re, er, asked, to do.

Look for the pattern in these progressive apparatchiks. The nomenklatura has been grooming them.

“My entire career has been devoted to the public interest…”

WHAT CAREER? She just graduated from college. She sounds like another obama?

Sandra Fluke is 32 years old, about a decade older than her classmates.

The more local the race the more the label of carpetbagger is likely to work against her. This is particularly true in an off year election when their won’t be as many lo-info types who show up for the Presidential race and then just pull the D lever the rest of the way down the ballot.

Remember the new rules in California mean that the general election is between the top two primary vote getters regardless of party. Local Dems can play rough in support of one of their own against this Eastern naif.

This woman is a product of the Nancy Pelosi machine. They have a good record of placing their picks.

In, then out, then in again…

Why am I NOT surprised that the above word sequence could be associated with this financially-struggling, innocent, needing-of-assistance collegiate-aged (isn’t the normal college senior 29-plus-yrs-old?) ingenue?

Isn’t that supposed to be the general thrust (*ahem!*) of her argument?

I’ve never once thought of her as the type who’d be interested in the “in, then out, then in again…” sort of thing. NTTAWWT.

If she had followed a practice of early withdrawal sooner, we wouldn’t even know her name.

Says a woman who’s never worked a day in her life.

The sanctimonious arrogance radiates off her.

G-D how I want to make a shrimp boat comment…

I’m Ok with Fluke doing the hokey-pokey in CA.

And, as long as the feminists use protection they will not replicate. Pastor Malthus would be pleased.

If they just fly over the rest of us – from east coast to west coast and back – and leave me alone, they can ruin their own local little worlds.

first in, then out, then in: no wonder the girl demands free contraceptives!

America begged for it, prayed for it, demanded it – and now America has it:

“Clay Aiken makes it official: He will run for Congress”

AMERICA, THE LEADERSHIP YOU SEEK IS UPON YOU.

If she’s going to practice withdrawal, do I still have to buy her contraceptives?

While I strongly considered offering my candidacy for Congress, I feel there is a better way for me to advance the causes that are important to our community.

Translation: someone read her the Riot Act about trying to cut ahead of her self-anointed betters in the Democrat Party. A Congressional seat like Waxman’s is a prize to be handed to the one selected by the High Command of the Democrat Party, and Fluke ain’t got the seniority.

Heh! We get it Sandra. You really want to be a U.S. Senator (six year term) or at least a congressman’s job leading to that, but those jobs are not available to you right now so you’ll take whatever looks easiest for you to get – any political office that will make you rich by way of insiders trading. After all the time you’ve spent (“….My entire career has been devoted to the public interest, whether representing victims of human trafficking or advocating for working families,”) you’ve just got plenty to offer those who think the taxpayers should pay for your worry-free sex.

To me, she does not look like someone who has boyfriends. Rather, the other kind.

IN OUT IN IN OUT OUT