Sorry folks, but the debut of The Intercept did not meet the hype.

Today was the unveiling of The Intercept, Glenn Greenwald’s new venture backed by mega-money from the founder of Ebay.

The debut is being described with extreme hyperbole, as if a new age in investigative journalism had been launched, not a website.  But even a cursory review, plus the ability to do Google searches, reveals that the revelations in this debut do not meet the hype.

The Intercept led off with two supposed blockbusters, first that the NSA is involved in locating cell phones for use in drone strikes that often kill civilians because of inadequate verification, and two, new aerial photos of supposedly unseen spy headquarters of the NSA and other organizations. 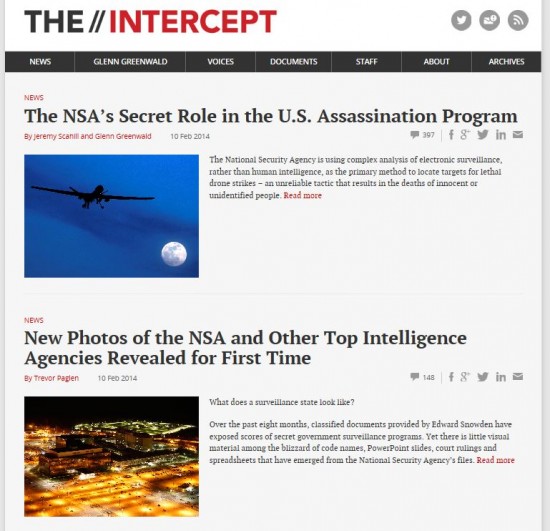 But were there any blockbusters revealed today?

The lead article, The NSA’s Secret Role in the U.S. Assassination Program, is being much hyped for the following disclosure:

In one tactic, the NSA “geolocates” the SIM card or handset of a suspected terrorist’s mobile phone, enabling the CIA and U.S. military to conduct night raids and drone strikes to kill or capture the individual in possession of the device….

Some top Taliban leaders, knowing of the NSA’s targeting method, have purposely and randomly distributed SIM cards among their units in order to elude their trackers. “They would do things like go to meetings, take all their SIM cards out, put them in a bag, mix them up, and everybody gets a different SIM card when they leave,” the former drone operator says. “That’s how they confuse us.”

As a result, even when the agency correctly identifies and targets a SIM card belonging to a terror suspect, the phone may actually be carried by someone else, who is then killed in a strike.

This is not new information.  It does have some details we didn’t know, but the role of U.S. spy agencies in tracking cell phones for drone strikes has been known for at least a decade.  We may not have known all the ways they did it, such as the use of metadata,  but we knew that the cell phones were being tracked for drone strikes.

Constantly changing which cellphone you use definitely helps if you’re a terrorist trying to avoid detection, but it turns out that it’s not gonna get you very far if you keep using the same SIM card in each phone, which is apparently how the US was able to capture Khalid Sheikh Mohammed, Al Qaeda’s military commander. Even buying anonymous, pre-paid SIM cards didn’t make a difference, and in fact was what lead to their downfall. Because they could be purchased anonymously, the terrorists didn’t think it was important to switch cards from time to time.

The American and Pakistani intelligence services credit U.S. unmanned aircraft with decimating the ranks of terrorist and insurgent operatives in Pakistan. “Very frankly, it’s the only game in town in terms of confronting and trying to disrupt the Al Qaeda leadership,” CIA director Leon Panetta said in May. The unmanned aircraft have supposedly carried out 28 attacks on suspected militants, just since the start of the year. Hundreds have been killed, including as many as 45 more people in a series of strikes today.

But how the killer drones find their targets has been a matter of some dispute. Local Taliban commander Mullah Nazir, himself an occasional target, says they’re guided by SIM cards, installed in militant cell phones. Area tribesman talk of homing devices, planted by informants, that are capable of signaling American aircraft.

That civilians are killed also is not new.   It has been the subject of debate for years.  Glenn Greenwald even wrote about it long before Edward Snowden.

The second lead article was New Photos of the NSA and Other Top Intelligence Agencies Revealed for First Time.

But were they really for “the first time”?

Do a simple Google image search for the National Geospatial-Intelligence Agency, for example, and you will find many images just as detailed (although not as pretty) as those in The Intercept. The contractor that built a new campus for the NGA, Parsons, has some really detailed images on its website, including this diagram of building layout: 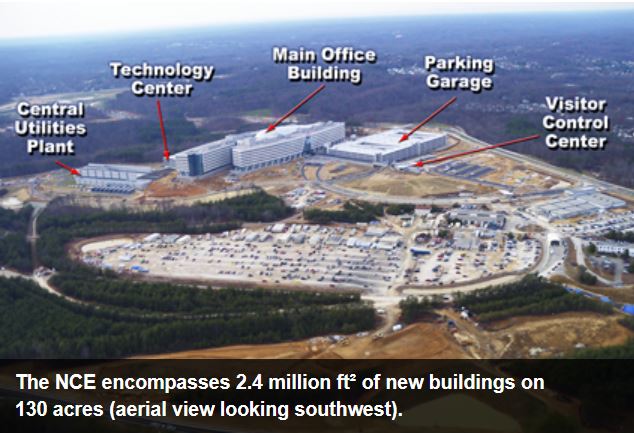 Also look at this NOVA program from February 3, 2009, The Spy Factory, for photos of the NSA (including the featured image above).

In fact, watching this program, I’m wondering how much we really have learned about the NSA threat to privacy from any of Greenwald’s reporting of Edward Snowden leaks.  We have learned a lot about how our foreign intelligence operations work, but the threat to privacy was pretty well disclosed long before Snowden delivered his stolen documents to Greenwald:

If this debut is any indication of the hyperbole, The Intercept may just prove the maxim that a guy who made a fortune (doing what he knows) and his money (doing things he doesn’t know), are easily parted.

Yawn . Another gay guy up in arms .

I don’t know what to make of this blog entry because its criticism is so over the top it wanders into some very weird territory.

Was this a paid for blog entry? I shouldn’t even be asking that question but considering the questionable content it needs to be asked.

This was authored by William A. Jacobson… correct? There must be an error or the blog was hijacked.

Yes, the “privacy” revelations at the first were just a cover for the rest which have aggressively damages our national security, and were revealed for that purpose alone.

Greenwald is a known liar and over-hyper of his own work. That his new venture is a total flop was expected. The only question is how much of his gullible sponsor’s cash he is able to put into his pocket before the plug is pulled.

NEXT UP: the spectacular flop of Ezra Klein and Matt Yglesias’ new venture in which they tell readers how to think, financed by another idiot with too much money.

Greenwald is doing the environment a favor by recycling old news.

What is more of a revelation is that under the Obama/Holder regime the simple non-profit application’s of good people are being scrutinized and used against them because it is thought that they would actively disagree with his “Majesty.” The Regime is afraid of these people because the Regime already knows how the Regime has acted (e.g., ACORN).

It’s been a tactic of the left for decades to breathlessly announce as “secret” various items they don’t like. It’s done to ramp up the ominousity quotient. Frequently, the issue is either/both already known and/or hardly a concern.

I’m still waiting for snowden to tell us something I wasn’t already aware of.
just learning the NAME of the program that operates just as I thought it did doesn’t count.

Has Greenwald ever found out who was posting fulsome praise for him all over the Internet from his home?