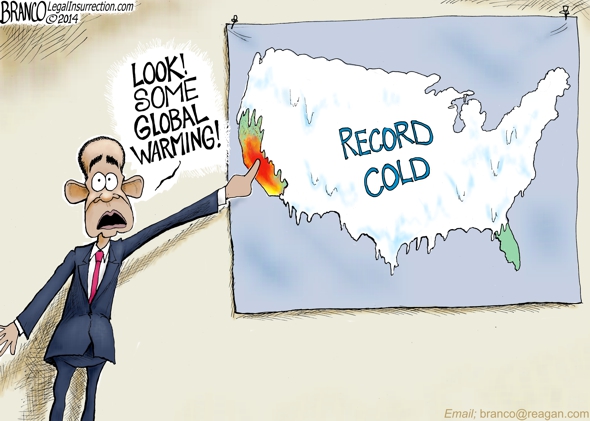 We shouldn’t laugh at this.

A noted expert just declared that Global Warming is a WMD.

He didn’t say who wields this weapon, but I’d guess that the Tea Party has it’s finger on the trigger!

It’s all the alarmists have left as the science has turned against them. Expect much more yelling, crying, obfuscating and outright lying in the near future…

The warming trend from the 80s to late 90s is over and we’ve entered a cooling cycle that is likely to be significant over the next few decades.

Ideally the government would get out of the way and let people make their own decisions, but if the government must act to “regulate climate change” it should now be subsidizing coal plants and setting maximum mileage standards in new cars.

As an aside, if you accept the Gaia hypothesis one can make a strong argument that we are here today to stop the next ice age. Moderate warming trends of the type that Warmists freak out about are generally positive for biodiversity.

Ho-Hum, just another diversion while usurping the our constitution

“the our”. Phfffllltt. Real gooder, ain’t it?

I shoulda’ put (pick one) OR I shoulda’ just “picked one” myself..

Is Obama pointing at Sodom and Gomorrah with its scorched earth policy? Or, is he pointing to where Algore lives? Or, both?

All drought aside, we should get in on the next entrepreneurial wave before Algore starts selling his inverted hockey stick global cooling kit.

I always wondered if they just printed out the “hockey stick” graph upside down.

Now we’re being told that it wasn’t the fantasy science known as Anthropogenic Global Warming after all, that was a danger to the Earth, but the equally fantastic concept of man-man “climate change” that will kill us all.

Let me get this straight. Carbon dioxide (aka: plant food) trapped by the atmosphere has warmed the Earth to the extent that it’s actually making us colder, right? It’s the same bad old carbon that is produced by man, but all that “settled science” was wrong, and it’s really making us freeze.

I just wonder that, as the last Neanderthal Man passed into history, if he blamed the invention of “fire” for the destruction of his beautiful, perfect snowy world, as all those nasty green plants rose where once only glorious glaciers covered the land.

Climate change has been with us since, oh…. Day-1. Or Day-2 according to Genesis.

… but the equally fantastic concept of man-man “climate change” that will kill us all.