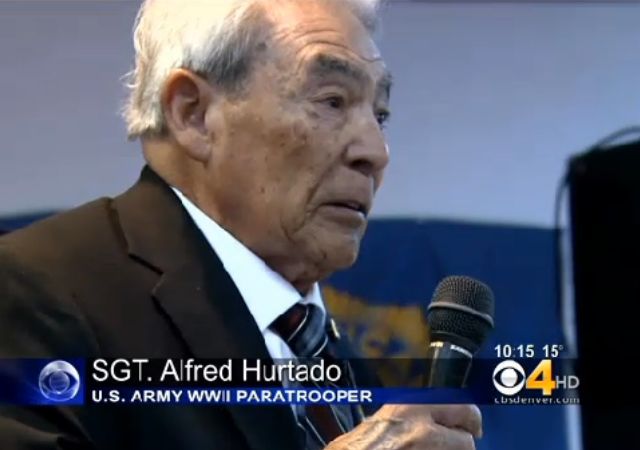 A 90 year old World War II veteran received long overdue recognition this past weekend in Colorado as he was awarded several medals, including three Purple Hearts.

It took several decades but an American hero in Commerce City has finally been recognized.

Army Sgt. Alfred Hurtado served in Europe during World War II. In 1943 he was severely injured and placed with wounded German prisoners by accident. His fellow soldiers thought he had died.

On Saturday the chairman of the Forgotten Heroes campaign presented Hurtado with three Purple Hearts, a Combat Infantryman Badge, and nine other medals.

Sgt Alfred Hurtado with 7 of 10 medals he earned during World War 2. Medals include 3 Purple Hearts. 2/2 pic.twitter.com/jrXPwdLpve

Listen to the video as he thanks the audience and expresses his appreciation for “all these little kids.”

“That’s what I fought for,” Hurtado said.

Better late than never, I guess, but 70 years seems a bit on the long side. I can’t help but wonder if the awards were never presented because Hurtado never felt the need to pursue them. He certainly had a colorful walk in the army. A worthwhile read.

He’s a great America; humble, dutiful, honorable. I’m grateful for his service and sorry that recognition of his experiences came to him so late in his life.