Will we ever fully know the terms of surrender?

Will we ever fully know the terms of surrender?

“U.S. officials said Sunday that Iran would be allowed to continue existing research and development projects” 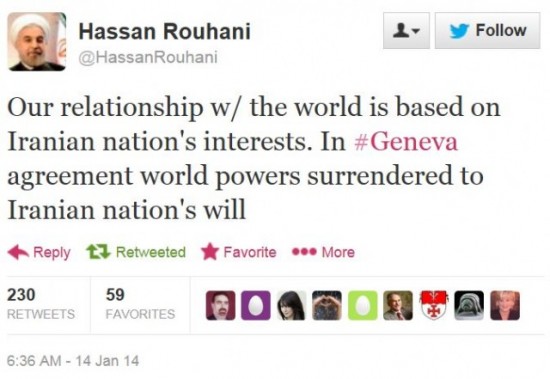 The new “moderate” President of Iran has declared victory and international surrender (featured image above).

According to Iran, we don’t really know; according to the State Deparment, we will find out. Via L.A. Times, New Iran agreement includes secret side deal, Tehran official says :

Key elements of a new nuclear agreement between Iran and six world powers are contained in an informal, 30-page text not yet publicly acknowledged by Western officials, Iran’s chief negotiator said Monday….

A State Department spokeswoman, Marie Harf, denied later Monday that there was any secret agreement.

“Any documentation associated with implementation tracks completely with what we’ve described,” she said. “These are technical plans submitted to the International Atomic Energy Agency,” the United Nations’ nuclear watchdog agency.

“We will make information available to Congress and the public as it becomes available,” Harf said.

Remember last fall when the Obama administration insisted it had not consented to Iran’s right to enrich uranium, even though Rouhani was claiming we had consented? Q&A: Is there a ‘right’ to enrich uranium? Iran says yes, U.S. no

How’s that looking now? Again from the L.A. Times article:

U.S. officials said Sunday that Iran would be allowed to continue existing research and development projects and with pencil-and-paper design work, but not to advance research with new projects. Araqchi, however, implied that the program would have wide latitude.

“No facility will be closed; enrichment will continue, and qualitative and nuclear research will be expanded,” he said. “All research into a new generation of centrifuges will continue.”

The research and development issue has been an important one for many U.S. lawmakers, who fear that Iran will try to forge ahead with its nuclear program while the negotiations are underway. At an administration briefing for senators Monday, members of both parties raised concerns about the centrifuge research issue, aides said.

Who has more credibility now?

"We will in no way, never, dismantle our centrifuges, Iran dep FM tells state TV.

"Iranians endured sanctions for 10 years, resisted, so the world would respect our right to enrichment, this is now the case," Iran dep FM

Iran dep FM Araghchi tells state TV nuclear rollbacks are temporary: "we can return to the previous situation within a day."

I’m not sure which is the root of America’s failure in this negotiation: Valerie Jarrett’s compliance with Muslim authority or John Kerry’s stupidity.

Taken together, they show a willful aiding of an enemy who wants nothing less than America’s capitulation and/or destruction.

“I’m not sure which is the root of America’s failure in this negotiation: Valerie Jarrett’s compliance with Muslim authority or John Kerry’s stupidity.”

I think you’d have to roll into the mix Pres. ScamWOW’s fundamental hatred for American values, including our friendship with Israel.

In a perfect Liberal World – Barak Obama would get a second Nobel Peace Prize for triggering the Apocalypse.

These people are who we knew them to be back in the 60s. They are Collectivist haters of America.

I know history repeats itself, but this borders on plagiarism.

In 1919, Andre Tardieu, a French diplomat charged with implementing the inspections, had written to Colonel House, President Woodrow Wilson’s adviser, anticipating reactions to whatever the inspectors reported.

He said the “pacifist element” in many nations would “be quite naturally inclined to deny reports disturbing to their peace of mind.” So they would “more or less consciously espouse the cause of the German government, which will deny the said reports.” He added: “Germany will deny. The governments will discuss. Public opinion will be divided, alarmed, nervous, and finally, the League unarmed will have brought to pass in the world not general peace but general uncertainty …”

Nevertheless, Tardieu was optimistic because “a modern mobilization demands years of preparation and cannot be carried out in secret. Neither of these essentials is henceforth in the hands of Germany.” If enforced, the disarmament regime would make Germany incapable of mobilization.

The field marshal who was in command of all German armies at the end of the war agreed: “Months would be necessary to prepare a new war, and do you think the French would look on with their hands in their pockets?” The field marshal was Hindenburg, who as Germany’s semi-senescent president in January 1933 appointed as chancellor a World War I corporal, Adolf Hitler.

Yeah, I’m pretty sure you’re a racist if you don’t think this is an overwhelming victory for the US of A and world peace and happiness in general. . . .

Y’all are being way too nice.

Islam says that it is okay to lie and deceive your enemies, especially if it furthers the cause of Islam. Since Iran believes that the Madhi is coming to lead Islam in a glorious world conquest with Iran in the vanguard, they will stop at nothing to create the conditions.

So, along comes fellow Muslims Barack Hussein Obama and Valerie Jarrett, who also lie and deceive to help Iran in their quest.

If Obama is not complicit in this, then he truly must be the stupidest, most disengaged man to ever hold public office (including Hank Johnson), much less serve as POTUS.

Some readers may not be familiar with….

“In Islam taqiyya is a form of religious dissimulation, or a legal dispensation whereby a believing individual can deny his faith or commit otherwise illegal or blasphemous acts while they are at risk of significant persecution.”

The UN Security Council Resolutions – six of them in all, I think – demand an END to enrichment and dismantling of the plutonium reactor to end sanctions.

Do UNSCRs no longer have the force of law?

“We have to sign the agreement to find out what’s in it.” Sounds familiar. Happenstance, coincidence, ….

If this “agreement” is today’s version of Munich, what will be the modern equivalent of the 1939 Blitzkrieg?

Or, will we find that out when Iran’s nuclear tipped rockets begin to arrive on their intended targets?

It should be fairly obvious that Iran is essentially a nuclear state and Iran knows Obama knows it. They likely reached a quiet detente in 2012 during the run up to the election where in exchange for not declaring themselves a nuclear power in 2012-2013 Obama would work to eliminate the sanctions or at the least strip them of meaningful import. Both of which he’s done. Much like the $7 billion in direct and indirect aid the US pays Pakistan not to ‘lose’ the odd nuke, we’re not so subtly bribing Iran not to ‘lose’ a few nukes to some terrorist army or another. Expect in another year Obama to send ‘technical advisors’ to Iran to help them secure the weapons we pretend don’t exist.

Kerry Aide: “Iran Should Not Be Required to Cease Terrorism Against U.S., as Prohibiting Iran from attack U.S. would harm nuke negotiations”, says fmr. aide..
http://freebeacon.com/fmr-kerr…

Ah, hello.. does UK PM Neville Chamberlain’s appeasement of Hitler and his statement of “Peace in our Time”, with a worthless Hitler signature on a worthless piece of paper come to mind.

Does this sound like pro-America, pro-State of Israel, pro-Freedom and Liberty, U.S. National Security leaders of America- NO. It sounds like anti-American, anti-State of Israel leaders of America, for this statement is truly cause for the immediate Impeachment, and high crime charge of Treason against Obama, along John Kerry and Hillary Rotten Clinton.