The spread of the quenelle – an antisemitic salute – is a testament to growing anti-Semitism tied to hatred of Israel, particularly in Europe.. 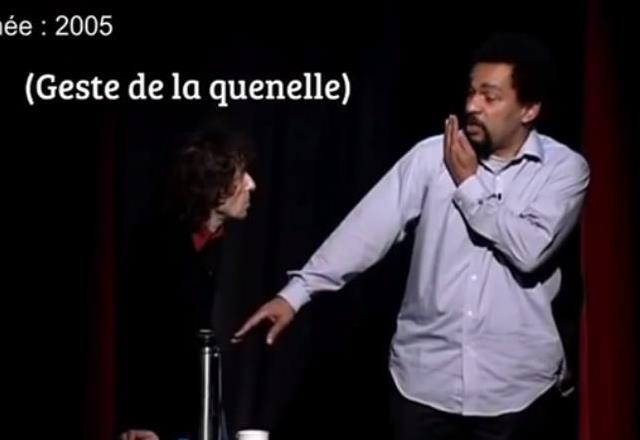 The quenelle is a salute attributed to French comedian Dieudonné M’bala M’bala. Dieudonné, who started his career as a liberal anti-racist, has, in recent years moved to the far right and embraced the politics of Jean Marie Le-Pen. A few days ago France fined him again for his continued incitement against Jews.

The salute has made the news recently because a French born soccer player, Nicolas Anelka used the salute after scoring a goal. The gesture drew criticism from the French government and spurred an investigation by the English Football Association, which could suspend Anelka “for violating the league’s anti-discriminatory rules.” Anelka said that he was merely offering a tribute to his friend Dieudonné.

Then a picture came out of Tony Parker, star of the NBA’s San Antonio Spurs, using the quenelle some three years ago. When confronted with the fact that it was, in fact, offensive, Parker immediately apologized, saying that he was unaware of the connotations.

I suppose I should be encouraged that a football league is investigating Anelka and that the French government is prosecuting Dieudonné. But I’m not.

What bothers me was expressed very well by Deborah Lipstadt in Tablet Magazine. Lipstadt compared the popularity of the quenelle with the refusal of the IOC to commemorate the Munich massacre:

At the root of both the IOC’s actions and the quenelle is simple anti-Semitism. One was an expression of covert anti-Semitism offered by buttoned-down elitists, well-heeled professionals and politicians who have entered the highest echelons of international sports. The second, the quenelle, is an expression by people we generally associate with the hoi polloi, the many, the common folk. By this I don’t mean to suggest that the people involved in giving this salute are necessarily stupid or uneducated. That is certainly not true of Dieudonné, of Anelka, or of many others who have participated in the quenelle wave. But it is nevertheless a mass phenomenon. …

One group cloaks its prejudice in high minded rationalizations. The other openly appeals to people’s most base hatreds. The elites might never personally assault anyone or espouse violence. However, they create an atmosphere that allows others to more freely engage in anti-Semitic actions. It is not a matter of one group being worse than the other. It is that both are necessary for the perfect storm. This storm might take a very long time to gather to gale force—but the atmospheric elements increasingly seem to be falling into place.

To too many people, expressions of antisemitism are acceptable. They’re not reasons for opprobrium. In the United States, the man who spurred a pogrom is now a talk show host. Academics who promote anti-Jewish conspiracy theories are not shunned but welcomed as an additional voice to the debate. And a movement that targets Jewish commerce poses as a moral conscience.

The popularity of the quenelle is a sign of the degree that a certain intolerance – antisemitism – is tolerated. But I don’t think any amount of legislation or legal action will stop it. The politics that blame Israel first make for a comfortable environment for the quenelle to thrive.

UPDATE: The quenelle is not unique to French born athletes. (Tony Parker is French.) According to Lipstadt, those using the salute have been photographed near the Otzar Hatorah school in France where a Jewish teacher and three students were murdered by a Muslim gunman two years ago, near the Anne Frank House and in Auschwitz. A number of quenelle photographs have even surfaced at the Kotel – Western Wall – in Jerusalem. The ubiquity of these photographs with the perpetrators smiling prompted Lipstadt to observe:

Generally the subjects are smiling broadly—if not laughing—at the secret handshake they share. Anti-Semitism is treated as a joke.

Is the elder Le-Pen relevant? His daughter might be the only one to respond to the effects of mass immigration:

This man might appeal to you more, but has little support:

Please note the United States has its own legislative trap, which few talk about. The following essay is worth the time:

I posted this a year ago:

The return salute is called the ‘right-cross to the jaw.’

And, when necessary, a left jab to the sternum, maybe also by another right-cross, if necessary!

OTOH: While I’m very much a free speech kind of person, anyone doing a quenelle to me is doing much more than simply expressing a point of view.

Stiffened fingers to the throat. Done right you don’t have to listen to them spew hatred ever again.

I don’t want to throw a wrench in your fire, but if you will look at the last two presidential elections, you will note that the Jewish population in the US vote overwhelmingly for Obama. Obama represents about as much of an anti-Semite as you can get in the US without being in the KKK. Jews did the same thing for Hitler. In fact, the Jewish populations generally seem to lean to tyrants that don’t have their best interest. I have often wondered about that, can anyone shed light?

What is with the sledging of jean Marie & Marine Le Pen? My guess is you know verry little about them or the french National Front party.

Jean Marie was indeed fined by the Germans ( after he lifted his EU immunity) for minimisatiion of the Holocaust. (pot calling kettle ). His offending statement was that the jewish element was just a part of the war . Imo as someone who was there , he is entitled to his view. i believe he himself was made an orphan during the war.

He was also fined by the French for anti muslim remarks. He is also anti illegal immigration , anti abortion other ‘conservative’ stances.

But as the poster above states Marine is a different person (hello Rand Paul is not his father ). Of israel she is quoted by Haaretz…….slightly paraphrased

‘After all the NF has always been Zionistic & always defended Israel’s right to exist & that criticism of (in this case the Settlement building is not anti semitic. ‘

Also iirc France is one of very few nations whose jewish population has increased. In the School attack (which also was directed at fellow Algerian descendants , France acted correctly. France also backed Israel in the recent Iran Nuke deal.

Of course a fair number of Jews are leaving France now; for some reason (wonder why) they don’t feel safe. Israel has been making special arrangements to take the French Jews in.

So perhaps your enthusiasm for the French is a tad … uninformed?

What is a “fair number ” ? Many french Jewish have gone to live in England – but they are still french. Your figures will need to be those that renounce citizenship. Cough up bebe.

My source was an overall historical estimate 1900 1939 1960 & the latest available. France was unique. There has to be something to it. it might be more if they did not convert eg Nicolas Sarkozy’s grandpere.

i agree Israel has few friends now & with attitudes like yours it is not surprising. France is doing its best but it is never good enough for you guys.

You did not refute that david wrongfully attacked the Le Pens -especially Marine .

Israel has few friends now (and for much of its entire existence) precisely because of anti-Semitism, not because of people like me. I support Israel’s right to exist — further, I support Israel’s right to do as it wishes with the West Bank, since it won it fair and square in a war (see the last five thousand years of recorded human history for the legal basis of that statement).

As to the LePen’s (both of them): they seem like nutters to me. But that’s my general reaction to most European politicians. You may if you wish say the same about American pols, and we’ll be even.

i would not associate anti semitism against a particular politician or party without some research. David has just jumped on Marine who IS a Zionist.

Perhaps he doesn’t like France, but fear not – France will become a Muslim country soon enough, and provide the rest of us with a reason not like it…

So far, I don’t think I’ve witnessed anyone performing this “salute” yet. It’s shameful! All this unnecessary hate. And it is frightening as well. I pray that it never goes any further than them [the saluters] acting stupid. Thank you for sharing David. Stay safe.

One further comment: Bibi seems to understand quite well the need to state that Israel will defend itself. This is not an issue of just Jews being targeted by idiots like Dieudonné. Rather it’s anyone not part of a collective, Gentiles included.

Gentiles because the next time, the selection process will not stop at supposed ethnic or national boundaries, it will encompass anyone not part of that collective, however that collective defines itself.

There is an evil lurking out there, Europe, the USA, elsewhere, and it’s getting more emboldened yearly.

For USA, 2014 is a defining year and that might be said for other countries too.

Discussion on the president’s pic doing this gesture that is said to be really doing a hiphop gesture of dusting off the soldier. Interesting comments and links to more on this. http://wtpotus.wordpress.com/2013/12/28/obama-loves-to-work-at-nothing/comment-page-1/#comment-128977

With all the damage and demonstrations that Muslims are doing in France, it takes a real idiot to think Jews are the problem.

The ignorance of these people, especially the blacks who are doing the quenelle is astonishing. The quenelle is an abbreviated sieg heil. What did Hitler have in mind for anybody who was not “Aryan”? For yellow, brown, and black skinned peoples? Dieudonné, the stupid bastard, would have wound up in a concentration camp, gassed, incinerated because his blood was not pure Germanic. Furthermore, the Muslims he sympathizes with, equally stupid bastards, would have helped Hitler burn others like Dieudonné, and would themselves have been placed in the ovens when hitler no longer had need of them.

Those who are ignorant of history are doomed to be its victims.

Antisemitism is the new black. “All the cool kids are doin’ it!” Ugh.

It is a Arab plot: Flood Israel with enough French and they will just surrender.

hehe -that is clever . However if america had listened to the french they would not have lost 50,000 dead in Vietnam.

The French might have surrendered to the Germans but the Americans were driven out & beaten by peasants.

This sounds like a moral panic. The wiki article for this gesture says the name is an allusion to a suppository, and the raised arm marks how farm up one’s downward facing arm the addressee can “shove it”. The explanation that this is a downward nazi salute, which I think has not been offered by the guy who invented this gesture, is quite a stretch. Is waving a bent-arm nazi salute? Is karate-chopping a contact nazi salute? Is playing “paper” in rock-paper-scissors the nazi move?