Exercising his own political veto. 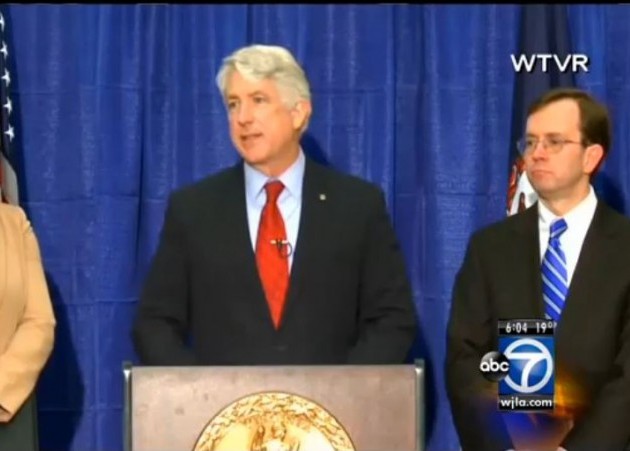 Newly-elected Virginia AG Mark Herring announced he will be joining the plaintiffs in lawsuits challenging the state’s ban on gay marriage. So not only is he declining to defend Virginia’s gay marriage ban, which was passed with 57% of the vote (including Herring’s) in 2006, but he is arguing for the courts to strike it down as unconstitutional.

AG Mark Herring is tasked with defending the law of Virginia in court. If Herring wanted to declare it unconstitutional, he should have tried to become a judge rather than running for AG. Republicans in the state seem to agree, not surprisingly:

To be fair, according to this article, Herring seems to have “stressed marriage equality as part of his campaign last year.” The article neglects, however, to tell what Herring actually said about it; were the people of Virginia informed of his plans?

Apparently not, according to Victoria Cobb, president of the Family Foundation of Virginia:

It is incredibly disappointing that [Herring] wouldn’t have been honest about his intentions and very straightforward about this issue while campaigning.

The only other information I could find about Herring’s gay marriage promises during his campaign is from this article by David Weigel in Slate. Weigel, no fan of the gay marriage ban, approves of Herring’s actions, so Weigel is probably telling the truth when he writes that:

Gay marriage played no role in [Herring’s] campaign; in fact, Herring voted against gay marriage when it came before the legislature.

Weigel also mentions this poll taken last July, which shows support for same-sex marriage in Virginia standing at 50%, and the opposition to gay marriage at 43%. If that poll represents reality, it certainly seems that Virginians may have been poised to (as Weigel points out) “wave in gay marriages.”

But if they wished to do so, why wasn’t the amendment banning gay marriage repealed? Apparently, the forces supporting gay marriage were too impatient to allow that process to work its way through, and too worried that it wouldn’t succeed, even recently:

State Sen. Adam Ebbin (D-30th) has introduced legislation [in late November, 2013] to start the ball rolling to repeal the state constitutional amendment defining marriage as between a man and a woman…

To repeal the 2006 amendment, legislation would have to pass the General Assembly two times with an intervening election, then would go on the ballot in the next succeeding general election. If it won first passage in the 2014 session, the measure would have to again pass the legislature in the 2016 session after the next state election, meaning the earliest the measure could go before voters would be November 2016.

Even gaining first passage in the General Assembly could be the longest of longshots, particularly in the House of Delegates. A companion bill to Ebbin’s has been introduced by Del. Joseph Morrissey (D-Richmond).

In the 2013 session, a similar measure by Del. Scott Surovell (D-Fairfax) failed to make it out of a House subcommittee. There was no companion bill in the state Senate.

When the marriage amendment was approved by the General Assembly in 2006, it passed on votes of 73-22 in the House of Delegates and 29-11 in the state Senate, winning support from a bipartisan mix of legislators. The six members of the Arlington legislative delegation at the time all voted against it.

Weigel doesn’t go into this sort of detail on the background of how repeal might have worked, given enough time and support. But Weigel refers to it obliquely in the following manner:

So Virginia’s one of those states that’s probably ready to wave in gay marriages [according to the poll that showed 50% approving], but can’t, because an older and more conservative electorate locked and bolted the door.

“Locked and bolted the door”? I guess that’s how we now describe the amendment process—the same process by which the law was passed in the first place. The door isn’t “bolted” forever. It’s just that the pro gay marriage forces know they don’t quite have the legislative support to unbolt it yet, and they don’t think there’s any reason they should have to wait to muster it. They are hoping that liberal judges—with the help of Virginia’s new AG, rather than his opposition—will do it for them.

Something’s in the water …

With the further break up of the sanctity of God-given natural marriage there will be more poverty, less regard for children and human life, more godlessness and an increase in antinomianism.
AG Mark Herring is making his cultural scar.

One more nail in the US coffin. Creating sexual, spiritual and social chaos.

This is what happens when Republicans just let Obama and Holder decide they weren’t going to defend or enforce laws they didn’t like anymore.

I truly believe that these people should be put in jail for their actions. You are making a conscious CHOICE not to enforce the law.

You’re an Attorney General. You don’t GET to decide which laws are good and which aren’t. Your job is to enforce the laws. Do it or go to jail – that should be the policy.

The individual states need to enact recall legislation covering any and all elected positions within their state. And the citizens need to make use that recall power. Recalls are messy, but citizens should have a remedy other than waiting out an entire election cycle to rid themselves of the slackers, liars and incompetents.

If AG Herring doesn’t think he can support the state’s laws, as he swore to do, in good conscious, he should resign the office and campaign for his beliefs like any other private citizen. Our judicial review system can’t work to test our laws if we have no one to argue for one side of the issue, just as our trial system won’t work without public defenders arguing in court for people we believe are guilty. Corrupting his office for his own political views is nothing less than a coup overthrowing a vital part of our government that he swore to protect, and he should go to prison for it. Seriously.

The issue is almost irrelevant. The salient point is that while all politicians lie to some extent, it is Democrats who must always lie about their intentions.

It is simply not believable that he didn’t intend this all the time. The General Assembly should hire outside counsel since the AG won’t do his job, and they should cut his office budget in retaliation.

Many people go into law to lord it over others.

The USA – a land of lawyers- is open & ripe for them to just walk in on the back of the law to do just that.

There looks to be no protection against them . Of course there is a Supreme Court composed of lawyers.

Of course William the conqueror brought in a bevy of lawyers. Nothing new I guess .

The thought that none of these “enlightened” politicians are showing ANY concern for the demolition of the institution most capable of raising healthy, well-adjusted children, sickens me.

And of course, they’ve sickened the country.

With the amount of potential presence a state AG has in the media – someone must have reminded Herring he has to tow the Party line or have no future Democratic support in politics.