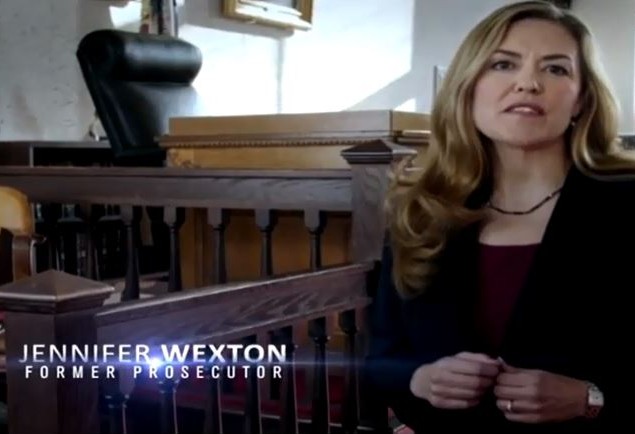 The War on Women is the never-ending Democratic Party strategy.

But this one is over-the-top even for that War.

In an outrageous ad aired on the local Washington D.C. NBC affiliate WRC-4, Virginia Democratic state senate candidate Jennifer Wexton – running to replace newly elected Virginia attorney general Mark Herring – made a shocking comparison between violent rapists that she once tried as a prosecutor to “Tea Party Republicans” in the Virginia legislature. [Listen to the audio or watch the video after the jump]

After describing women being assaulted and “traumatized again by facing the criminal in court,” Wexton made this declaration: “…as a prosecutor I put violent offenders in prison. In the Virginia Senate, I’ll fight just as hard against Tea Party Republicans who would take away a woman’s health care and her right to choose, even in cases of rape and incest.”

(Works the other way too.)

“Reasoning with a Democrat is like trying to punch a hole in water.”

Rape is an act of involuntary exploitation. I think the lady doth project too much.

They are really afraid of the Tea Party – on both sides of the aisle.

Let me get this straight. I am now considered no different than a violent rapist because, as a Tea Party member, I speak for the life of the unborn and for the physical and emotional life of the mother?

This bitter clinger to her religion of ‘rights’ should abort her campaign to save face.

By virtue of your TEA Party affiliation, you are also automatically a racist, sexist, homophobe who wants to ban unions, starve kids, and poison the planet.

The Left has only one strategery left. “SHUT UP, or we’ll call you names and try to destroy your life.”

“SHUT UP, or we’ll call you names and try to destroy your life.”

You have just described government by the powerful clique of Heathers at Westerburg High School.

Some of us are social conservatives, but I think the Tea Party crosses political lines and includes libertarians and even some Democrats.

Fine. Let’s compromise.
Abortions shall be 100% legal forever provided Leftists accept one condition:
All aborted babies must be shot by a medical technician before they are discarded as medical waste.

Oh, is there something wrong with that idea?
They’re not alive anyway, right? Why does it matter?
Which is stronger, Leftists?
Your hatred of guns or your love of abortions?
Is it because you know it’s really a baby?

The Democratic Party is the ratchet party. They ratchet up the rhetoric, the stupid, and the loss of liberty.

You mean the RACIST, rachet party?

Just what percent of tea partiers would forcibly deny a raped woman access to a morning after pill? 15%? … versus what percent of Democrats … 10%? Many Catholics vote Democrat … and they would be more obligated than the generic tea partier to fight for the unborn “child”.

But “no exception for rape” in the Republican platform wasn’t a tea party demand, was it? Lay that on Huckabee and his candidates.

All I can say about this chick is….”No rest for the wicked”

She looks like she needs to start using Charmin.

The Tea Party is about fiscal sanity applied to government spending, and about a government apparatus downsized to be affordable with the spending that mathematics tells us is appropriate. And “appropriate” means that if revenue can’t keep up with spending, the shortfall can’t be rectified through arbitrary levels of taxation. That’s mathematics, also. A better name might have been the Mathematical Party, but since so many people get lightheaded at the mention of math, maybe that wouldn’t have been such a good name after all.

But the Tea Party has nothing to do with abortion policy.

The split between the social and fiscal conservatives was the really fundamental development in American politics of the last decade. Before that they were easily confused, but there’s little excuse for it by now. Persons in some quarters try to pretend that the schism doesn’t exist; MSNBC types want to deride perfectly sound mathematical arguments by linking them to abortion policy, which is not amenable to mathematical analysis, and some social conservatives apparently feel abandoned by the mathematical types and try to obfuscate the distinctions between the two.

Or so I thought.

Ahhh, Virginia, it was nice knowin’ ya. Thank God I got the hell out of there. Mark Warner was barely tolerable, but electing Kaine was ridiculous, and McAuliffe as governor will be an absolute joke. Now this. Believe me, her message will sell quite well up in NOVA and in places like Albemarle County. Were it not for the fact that democrats would lose 2 US Senate seats, Virginia and Maryland easily could morph into one big state.

Someone remind Ms. Wexton that it’s Democrats who have taken away millions of women’s health care and denied them the right to choose the insurance coverage that suits their own needs and budgets.

Wexton is Middle English meaning “The Lady is a …..”
Snark Snark

She has to be running in last place and will do anything
un-professional and un-ethical to get her name out.

She looks like the “spitting” image of some of the women rapists I’ve seen on the Internet – those teachers who have orally raped their 12-14 year old students. Is that how she has come to know about rapists?

To be perfectly believable, a Lefty needs to sound like: “Awwww duuuuude…. You know, fighting Tea Party radicals is like, you know, like fighting old-school, original Star Trek series Klingons.”

How dare she? I suppose it got her a few buck in funding from Rove.

Why are Democrats enabling rapists by not insisting on the prosecution of Tea Party members? Oh, the shame…..

If ANYBODY even remotely conservative leaning ran an ad like this they would be subjected to a 24/7 media blitz screaming for their head, along with dozens of articles in the media about the so-called ‘war on women’.

I think Jenny is kind of hot, in a sneery “spank me” kind of way. I also think she deserves to be sent packing by the Virginia electorate. If you tolerate that kind of histrionics, you get more of it. Here in Florida we tolerate Alan Grayson. Well, someone does.

Many prosecutors tend to be rigid, self-righteous, politically-motivated over-the-top @holes, and aren’t very intelligent. She is like a skinny non-morbidly-obese version of Chris Christie.

As a Virginian, I call on my fellow Virginians to please not screw this up.

[…] As usual, William Jacobson was way ahead of the curve on this story. […]