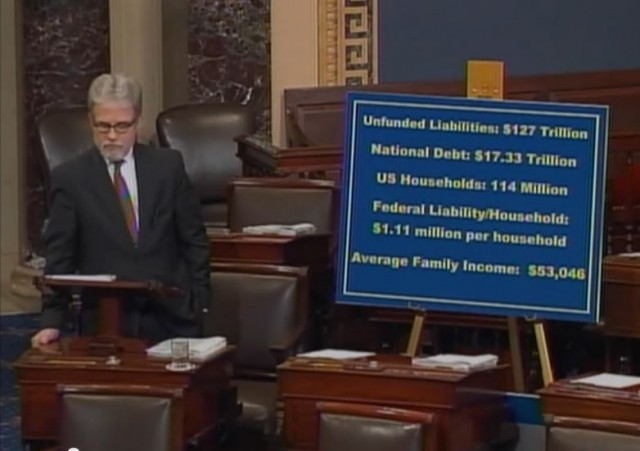 I guess this was a surprise to most people, including me, via Fox News:

Sen. Tom Coburn, one of Washington’s leading and most fiscally conservative lawmakers, announced Thursday he would be stepping down at the end of the year.

The Republican from Oklahoma had previously announced he would not seek reelection but his latest comments have him leaving Congress two years sooner than he previously planned.

Coburn has been suffering from a recurrence of prostate cancer and hinted about his departure during an interview with reporters last week.

“Serving as Oklahoma’s senator has been, and continues to be, one of the great privileges and blessings of my life,” said Coburn, 65. “But after much prayer and consideration, I have decided that I will leave my Senate seat at the end of this Congress.”

He was best known for his Wastebook releases on absurd federal spending:

I wish him well with his health issues.

The Governor, Mary Fallin, is a Republican. Any news of how she’s going to play this?

OK is one of only a few states that does NOT permit the governor to name a replacement. Sen. Coburn’s replacement will be elected in the 2014 November election. In the same election Sen. Inhofe will be seeking his own re-election.

It seems likely the OK GOP will conduct a primary election this summer to choose who they will place on the November ballot for Sen. Coburn’s now open seat.

This is unfortunate. For example, he is to my knowledge the only member of the Congress who really cares about the Right to Keep and Bear Arms (RKBA), among many other things that includes investigating why the Army’s M4 carbine is so bad (all the problems of the M16 plus a chopped barrel, reducing its effective range by about 300 yards), and why we can now effectively defend ourselves in National Parks … which includes important parts of the D.C. area, like the George Washington Parkway.

Many other good things, like a practicing obstetrician (although he may have had to stop that as of late), but the RKBA one is unique.

That is unfortunate, I actually live in Oklahoma. Coburn is one of the few that I’m actually sorry to see go, he’s going to be tough to replace.

Now if we could get rid of a dinosaur RINO like McCain I’d be dancing in the street.

So what did the NSA dig up about him?

I wish I was kidding.

I was thinking the same thing. Paul Ryan seems to have been brought into line too.

This is a loss to us all. Wish the Senator well.

Recently my Rep sent out a survey to ask constituents what were their top issues. Health-care, immigration, climate and so on were all listed but NOT reduction in gov’t size. Or aggressive work to ferret out waste and corruption.

Why is anyone surprised?

Coburn self-limited his terms in both the House, which he honored, and the Senate, which he is now honoring. His frustration with the DC way of doing things has been evident for some time.

As he has pointed out several times, it is almost to impossible to eliminate even duplicative spending which both parties recognize as wasteful and unnecessary. It is axiomatic that all spending creates its own constituencies which will lobby hard for their little trickle of gravy, and there is no corresponding groundswell of opposition to “minor” programs so only one side is heard in Congress – and the gravy flows without interruption.

Back in the ’80s, the Grace Commission found at least a dozen federal commissions which had been appointed for one reason or another, fulfilled their missions, yet still existed and were fully funded even though they had nothing at all to do. 60 Minutes even visited one once, the Chairman came into his well-appointed suite of offices, his secretary had his paper and coffee ready, which he read at his desk until lunch. There was no work.

Needless to say, none of these commissions were cut.

Sanity is hard. With Democrats around, it is virtually impossible.

Thanks for your service, Senator.

“Coburn self-limited his terms in both the House, which he honored, and the Senate, which he is now honoring.”

Not quite. His current term, which he promised would be his last, ends in 2016. Coburn intends to leave two years early, at the end of the current congress.

he did pledge to only server 2 terms in senate.