Does Hillary still wonder what difference it makes? 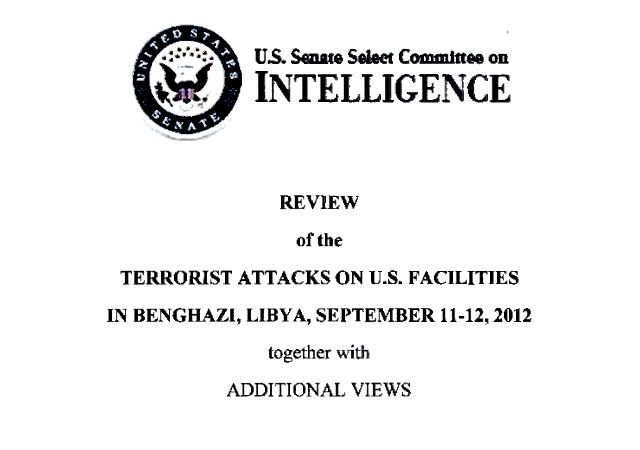 A report released by the Senate Intelligence Committee has concluded that the attacks on U.S. outposts in Benghazi, Libya in September, 2012 could have been prevented.

I’m still reading through the full report myself, but some of the primary highlights so far are included below.

The bipartisan report lays out more than a dozen findings regarding the assaults on Sept. 11 and 12, 2012, on a diplomatic compound and a CIA annex in the Libyan city of Benghazi. It says the State Department failed to increase security at its diplomatic mission despite warnings and faults intelligence agencies for not sharing information about the existence of the CIA outpost with the U.S. military.

The committee determined that the U.S. military command in Africa didn’t know about the CIA annex and that the Pentagon didn’t have the resources in place to defend the diplomatic compound in an emergency.

“The attacks were preventable, based on extensive intelligence reporting on the terrorist activity in Libya — to include prior threats and attacks against Western targets — and given the known security shortfalls at the U.S. Mission,” the panel said in a statement.

Beginning on page 9 of the Senate report, it goes on to list several examples of information that provided “ample strategic warning” of the deteriorating security situation in eastern Libya.

Another point mentioned in the report (page 5) is that of whether or not there was a “stand down” order.

The Committee explored claims that there was a “stand down” order given to the security team at the Annex. Although some members of the security team expressed frustration that they were unable to respond more quickly to the Mission compound, the Committee found no evidence of intentional delay or obstruction by the Chief of Base or any other party.

NPR addresses the issue of al Qaeda as noted in the Senate report (which can be found on pg 40):

On the issue of the role al-Qaida operatives played in the Benghazi attacks, the committee says that “individuals affiliated with terrorist groups” linked to that network “participated.” But, the report adds that “it remains unclear if any group or person exercised overall command and control of the attacks or whether extremist group leaders directed their members to participate.”

That conclusion puts the committee at least somewhat at odds with a New York Times report that concluded there is:

“No evidence that Al Qaeda or other international terrorist groups had any role in the assault. The attack was led, instead, by fighters who had benefited directly from NATO’s extensive air power and logistics support during the uprising against Colonel Qaddafi. And contrary to claims by some members of Congress, it was fueled in large part by anger at an American-made video denigrating Islam.”

The Senate report also recounts some of the details of the attack, a difficult account to revisit.

The majority of the report focuses primarily on security shortfalls and provides a number of recommendations aimed at helping to prevent security breaches in the future.

You can read the full Senate report here.

My concern here is more on what happened during the attack as well as the source of the video lie.

Of course this was preventable. That’s of the least concern right now.

That being said, finding out what could have been done differently is very important. I’m not going to hold my breath on nailing Hillary with what happened prior.

Has anyone reconciled early reports of “C-130 gunship overhead waiting for orders”, and other assets being told to stand down, with these recent denials? Gen. Ham was reported to have been told to stand down and he quit shortly after, but now he denies all that? Where is Christopher Foyle when we need him?

The deaths of patriot Americans at Benghazi, Libya on 9/11/12 was the result of treason on the part of Obama and Clinton. I hope some day those felons will face a federal court charged with this offense. I pray they be found guilty and face termination with extreme prejudice as traitors to the United States of America. SIC SEMPER TYRANNIS!

“Wonderful thing, a subpoena.” Wilford Brimley as an asst US AG in Absence Of Malice.

They’re not much good when our DOJ won’t enforce them.

Of course they were. Benghazi was an active war zone after our initiative to aid and support rebels, and terrorists, in their effort to depose the sitting government. It’s strange that the conclusion of war in Iraq received more attention than an unprovoked and undeclared regime change in Libya.

Most of this was fairly clear from the start, it has just taken nearly a year and a half to get Democrats to agree to the obvious.

There are three VERY simple questions which should be repeated until answers are given:

2) Measuring the drapes in the Oval Office for her coronation

3) Going to Las Vegas for a fundraiser.

Whitewash, all of it.

And what would you say if the NSA were not bugging all of your phones?

The Obama-ites delay in reporting the facts about Benghazi points to hiding an abuse of power – stonewalling action that would endeavor to save our Ambassador and the others with him. And, does it matter whether or not the attack was ad-hoc or planned ahead?

The Obama-ites gave the terrorist’s uprising the benefit (and delay) of the doubt and not the Americans signaling for help.

Obama deserves impeachment for the lives lost on his watch. And, Hillary never deserves to be president.

The sight of Hillary Clinton standing on the ground beside the coffins of the dead Benghazi Americans while she knowingly lies to their families about how it was caused by a video ought to be in every single GOP campaign until the day she is driven into political exile.

This! Every time I see that clip I seethe.

A videographer has fatwas and death threats because of this administrations slanderous lie. Does he have grounds to sue?

No mention of Stevens selling arms to al-Queda?