“we have real enemies and threats, and that intelligence serves a vital role in confronting them” 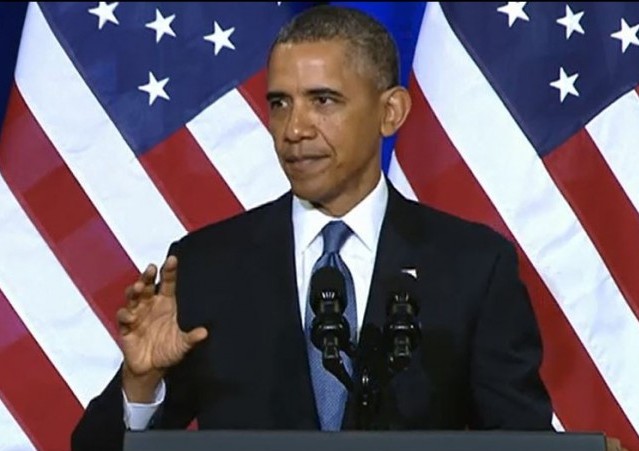 Below the key video portion of the speech (full text here).

I found this part to be a key dose of reality often lacking from the debate:

First, everyone who has looked at these problems, including skeptics of existing programs, recognizes that we have real enemies and threats, and that intelligence serves a vital role in confronting them. We cannot prevent terrorist attacks or cyber-threats without some capability to penetrate digital communications – whether it’s to unravel a terrorist plot; to intercept malware that targets a stock exchange; to make sure air traffic control systems are not compromised; or to ensure that hackers do not empty your bank accounts.

Moreover, we cannot unilaterally disarm our intelligence agencies. There is a reason why blackberries and I-Phones are not allowed in the White House Situation Room. We know that the intelligence services of other countries – including some who feign surprise over the Snowden disclosures – are constantly probing our government and private sector networks, and accelerating programs to listen to our conversations, intercept our emails, or compromise our systems. Meanwhile, a number of countries, including some who have loudly criticized the NSA, privately acknowledge that America has special responsibilities as the world’s only superpower; that our intelligence capabilities are critical to meeting these responsibilities; and that they themselves have relied on the information we obtain to protect their own people.

Whether the “reforms” are meaningful in protecting the privacy of law-abiding Americans is another questions.

It is an honorable thing Obama is doing here, defending NSA employees who work for him.

"We know intelligence services of other countries-including some that feign surprise over Snowden disclosers…" The Germans just can't win.

My assessment of Obama's speech/recommendations on NSA spying reforms, "baby steps in the right direction when we need giant leaps."

Hey @BarackObama, when you hold up Russia and China as countries who spy on their citizens more than you do, you're doing it wrong.

When this guy talks about ““… real enemies and threats, …”, I would much prefer he followup it up with “And I’m not referring to Conservatives, Libertarians and general Republican opposition to my regime”.

He more than likely is!

Well, yes. So in that sense, he’s telling the truth – he needs the Orwellian surveillance state because his America – the one which has been “fundamentally transformed” – has enemies.

The “one” who has never told the truth, never has had an honest job, never thinks of anyone except himself will never accommodate Constitutional principles.

The sun will rise out of the west first…

You notice he never, ever points to maniac, murderous Islamics as part of the problem. What’s up with that?

This proves that he might as well be an animated non-sentient entity. Either that or he should be up for a Best Actor Oscar.

“I’ve got a pen and a phone” does not fit in any manner with this passage.

Prove me wrong, somebody. Please. I’d hate the idea that we have a non-human in charge of the country’s government.

President Lying Liar Who Lies: “Trust me, I got this. You have nothing to worry about.”

Having the “capability” to penetrate terrorist communication is one thing.

Using that “capability” to actively troll and eaves drop on conversations and meta data of American citizens who have nothing to do with terrorism is another.

If anyone doesn’t recognize that our own government is more like the Chinese government in terms of spying and persecution for political dissent than the government the constitutional framers envisioned, you need your head examined.

There is a point where their persecution of political will begin to create domestic terrorists.

Stick that in your NSA-Hole, Obama, and choke on it!

I trust everyone heard Obama say in this speech there would now be transparency to our surveillance activities.

Is that like the transparency his administration has shown so far? Right, I thought so.

Am I the only one who thinks transparency is not what we want in our spy agencies? It’s hard to believe but this fool just reads this stuff. He has no idea whether it makes any sense nor does he have any idea what it is supposed to mean.

I could not live with myself if I was that far gone from sanity. He really needs to go. Slow Joe at least believes what he says.

Spies can’t effectively operate as spies if they have to deal with transparency, but then we can’t expect this crop of foxes to adequately guard the hen house either. The American people cannot trust the WH and neither can our country’s allies. The damage already done by the Chicago thugs across the entire breadth of the federal government is immeasurable. My fear is that they have already achieved their sought after fundamental changes to America’s foundation.

Did you really expect logic and common sense? Most of what Obama says is inane .

and he tells so many LIES that they all contradict each other MarkS.

Competent spies know how to keep a secret. Obviously this is no longer the case…

The most secure form of communication available to this country is Vice President Biden. So far no one has ever been able to figure out what he is talking about.

Re: Biden’s advice to blast away at perceived threats with a shotgun, how’d you like to be the kid who picks up a pizza delivery order to Biden’s house? I’d frisbee that m-f-er in from the street, and yell “PULL!”.

His use of “ordinary people” and “ordinary citizens” just rubs me the wrong way. It sets up a class divide between those in government and the rest of us. He really doesn’t have a lot of respect for the people he works for.

I guess the fourth amendment means nothing.

Few disagree that intelligence work is necessary, as is the need for secrecy. However, I do not trust this nor any future administration with oversight. Trustworthy, reliable oversight may only come from the appropriate congressional committees, and even that is far from any guarantee. Everything has become politicized.

I’m hoping a smart 2016 candidate will propose something about congressional oversight changes that relieves our concerns, something in addition to FISA courts, with oversight over FISA as well.

How I wish the we could go back to the good ol’ days of a robust intelligence community like existed back in the 1950’s and early 1960’s.

The Ellsberg fiasco changed all that and it’s been downhill since..

So once again his critics secretly agree with him, just like with Republicans at home. He’s clearly indicating Germany here and similar nations. By announcing that no legitimate critic exists, he renders himself above all legitimate criticism…