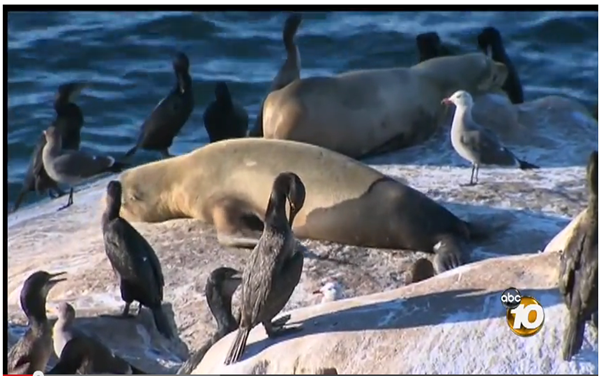 As a Tea Party activist, one of my earliest assignments was trying to determine where we might be helpful in an ongoing battle between seal-loving eco-activist extremists versus the citizens who wanted to enjoy the La Jolla cove area and the businesses dependent on them doing so.

Over the years, my thoughts on the seals’ presence at the Children’s Pool has mirrored my growing anger at the “do-gooder”, anti-humanity, liberty-crushing environmental activists who have used a combination of emotionalism, poor science, and political gamesmanship to redesign regulations and control businesses to meet their distorted worldviews. An action item for the grassroots “Tea Party” movement is to address the disparity in activism, so that the needs of all citizens can be addressed in a manner that is friendly to businesses, the people that depend upon these businesses for their livelihoods, and the environment.

However, the stench has become so bad that several of the area businesses have filed a lawsuit...including George’s-at-the-Cove, where my husband proposed to me in October 1998.

A lawsuit has been filed demanding the city eradicate the “foul, noxious and sickening odors” left by birds and sea lions defecating on the rocks next to La Jolla Cove.

The stink offends the patrons of some of La Jolla’s best known restaurants overlooking the cove and visitors to the famed La Valencia Hotel, according to the lawsuit filed by a group calling itself Citizens for Odor Nuisance Abatement.

The group’s president is George Hauer, owner of George’s At The Cove, one of the city’s premiere dining spots.

The smell is costing restaurants and hoteliers money, the lawsuit alleges.

Champion boxer Floyd Mayweather and his entourage booked two villas and six rooms at the La Valencia Hotel but then left after 15 minutes because of the smell, the lawsuit alleges:

“That is over $5,000 in one day’s rooms revenue that walked in and out of the La Valencia Hotel as a result of the noxious smell emanating from the cliffs.”

Part of the problem is that so many bureaucratic entities are involved (e.g. California Coastal Commission, California Department of Fish and Wildlife) that people have nowhere to go for recourse. And, despite the fact former mayor Bob Filner stank himself, he actually did try to tackle the problem by hiring a Northern California environmental cleanup firm for $50,000 to cleanse the rocks.

The editorial board of the San Diego Union Tribune points a finger directly at the environmental extremism in their opinion on this suit:

That is the proper context with which to see the maddening saga of the stench emanating from the rocky areas and cliffs at La Jolla Cove. It has been 13 months since a New York Times story laid bare for the nation not just our local shame but the collapse of common sense in the Golden State — the idiocy of environmental rules so rigid and so far-reaching that removal of animal feces is somehow classified as a threat to nature.

…But that’s also true of state and federal regulators who pronounce themselves unable to act with any sort of urgency. If state and federal law governing nature is so all-powerful that it prevents the removal of animal waste from areas densely populated by humans, then, as a Charles Dickens’ character said, the law is an ass.

The law may be an ass, but it is a potentially deadly one. As I noted in my original analysis, seals and sea lions are preyed upon by sharks. Last month, there was a report that the number of shark sightings in the area have increased substantially:

A rash of great white shark sightings in San Diego waters has surfers, swimmers, and a fisherman wondering what’s going on.

First, a handful of life guards spotted a large triangular fin in North County. Then a fisherman shot video of an 18 foot great white in La Jolla.

As Glenn Reynolds would say, all is proceeding as I have foreseen.

…and don’t even get me started on how the “endangered” sea otters completely wiped out the abalone population in California.

(Really excellent when pounded and breaded, then fried in butter. Yum! Used to pry them off their rocky homes with an old tire iron.)

Yeah, me too before I escaped from Kali, but those days are long gone. The only abalone you can find now is “farm raised” at $130 per lb. http://www.abalonefarm.com/

The best thing you can get in Kuhlifornia is a ticket east.

The population IS the madding crowd, and their government reflects it.

We used to vacation at the Cove quite a bit when I was a kid. Years later my wife and I enjoyed New Years Eve at George’s-on-the-Cove just before we got married. Sad to hear it’s come to this.

Something of a Great White Shark attack aficionado, in 1959, Robert Pamperin was last seen up to his hips in the jaws of a huge Great White by his skin diving buddy not far from the Cove.

They LOVES them those long-flippered seals.

Reflective of the area we live in, when our oldest daughter was in middle school, one day in P.E. class they started a session in swimming at the school’s pool.

Before entering the water, the P.E. coach made a joke referencing the movie “Jaws,” and, when none of the girls laughed, he sheepishly said, “Oh, you’re all too young to remember the movie and get the joke.”

To which, one of the girls sighed and retorted, “My dad was one of the producers.”

” Last month, there was a report that the number of shark sightings in the area have increased substantially”

IOW, the lawyers are congregating over it.

OK. Now we know where it comes from.

“…“do-gooder”, anti-humanity, liberty-crushing environmental activists who have used a combination of emotionalism, poor science, and political gamesmanship to redesign regulations and control businesses to meet their distorted worldviews…”

Great summation of the Totalitarian Left.

I was reflecting over Christmas on how Scrooge is the Dickens character who most reflects the Collectivist mind-set.

He was a Malthusian, certainly. He was misanthropic, and denied even himself any good things that could be had from his money.

Some read the story to be an indictment of “businessmen”, generally, but that ignores many of the characters, and it also ignores the observation Dickens made of the market’s provision of good things that most people could have, brought to the British Isles from all over the world via commerce.

Businessmen were actively seeking Scrooge’s contribution to a fund that they themselves were getting up, recognizing that the governmental systems for helping the poor was not doing enough.

But to Scrooge…like Joe Biden, Baracula, John Efing Kerry, etc…any act of personal charity was unnecessary. There were institutions, after all…

Of course, Scrooge would likely be a government bureaucrat now, happy to impose his own cankered view of humanity on everyone via power…which Dickens could not have seen in his time.

I have to admit that I find the poetic justice of the results of Leftist policy being an area made into a health hazard by piles of excrement defended by Leftists to be stunningly appropriate. And with all due apologies to the relatively few remaining Americans in California; I see this as the future of the state. You are fighting a rear-guard battle against totalitarians who in the end will not obey any law, or court ruling, that does not go their way.

Hilarious. Seals are master stinkers but live by the sea , get stunk out by sea life.

Hmm… I’m kind of on the side of the seals on this one, mostly because of the behavior of the activists that want to “take back” La Jolla Cove and kiddy area. Two women were caught on the seal cam last February hitting, kicking, pulling the flippers of the seals, until all the seals went back into the water. There have been other reports of the seals being harassed until they left the beach. If you don’t like the law, harassing the seals is not the way to go about changing it, or getting the beach cleaned up.

SoCA Conservative Mom.
That video was a hoax! Propaganda from the WAN conservancy to justify the seal camera and to get a phony emergency beach closure.
I have watched that video over and over again, not once did those girls sit,hit,kick or pulled the seals flippers.
I do not condone animal abuse or harassing seals or Sea Lions.
But to make a false claim for public hysteria and to profit to “Donate Here”. What’s wrong was radical extremist that would send those girls down to sacrifice resting and pregnant seal, just for propaganda and money.