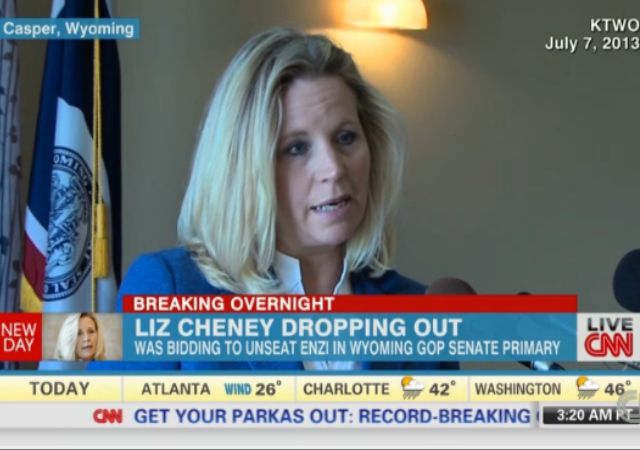 Liz Cheney  is ending her campaign for Senate in Wyoming, citing health concerns in her family.  The news was reported by CNN late Sunday night and confirmed in a statement Monday.

Liz Cheney, whose upstart bid to unseat Wyoming Sen. Mike Enzi sparked a round of warfare in the Republican Party and even within her own family, is dropping out of the Senate primary, she said in a prepared statement Monday morning.

“Serious health issues have recently arisen in our family, and under the circumstances, I have decided to discontinue my campaign,” she said.

“Though this campaign stops today, my commitment to keep fighting with you and your families for the fundamental values that have made this nation and Wyoming great will never stop,” she added.

That Mr. Henry Hawkins, will be nominated for the worst groaner in 2014. AND I do believe it and you will win that title, running away.

I linked newsbuster to your comment and credited you, hopefully this will go viral somehow 🙂
http://newsbusters.org/blogs/scott-whitlock/2014/01/06/liz-cheney-drops-senate-bid-networks-replay-divisive-family-feud-ove#comment-1189285162

Just had to play the fruiter card, didn’t ya? Well, at least now you’re “out” so there’s that.

Is this what they meant by not letting stupid TP candidates screw things up, that we’d best leave it to GOP establishment insiders who know what they’re doing? Like Liz Cheney?

I don’t know why she wanted the Senate seat in Wyoming. She’s a better fit for Virginia where she 1) lives 2) has lived for quite a while and 3) is sympathico with most of the GOP there.

Agreed on all points.

Virginia is a better fit for her and, besides, there was no real reason to replace Enzi.

Of course, the Purity Police can go over anyone’s record with a magnifying glass and a fine-toothed comb and find some instance where their salute of iconic shibboleths was insufficiently crisp.

Ok Ok. Please do not let Mary try -or OMG her ‘wife/husband ” A simple No More Cheneys will suffice . the world cannot take anymore ( Liz is not a bad person ). not so sure about the others.