Liberal self-identification surges! (up 1 pt since 2008)

Liberal self-identification surges! (up 1 pt since 2008)

Actually, only Democrats are more liberal, the rest of the country is more conservative. 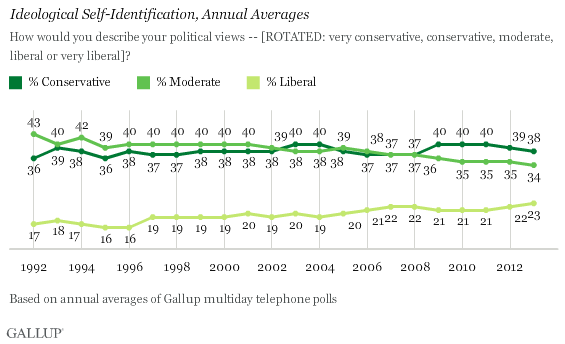 Media Meme to follow: These are great times to be a liberal in the U.S. of A.  Elizabeth Warren has ignited a progressive surge!

Gallup: Liberal Self-Identification Edges Up to New High in 2013

Americans continue to be more likely to identify as conservatives (38%) than as liberals (23%). But the conservative advantage is down to 15 percentage points as liberal identification edged up to its highest level since Gallup began regularly measuring ideology in the current format in 1992….

When Gallup began asking about ideological identification in all its polls in 1992, an average 17% of Americans said they were liberal. That dipped to 16% in 1995 and 1996, but has gradually increased, exceeding 20% each year since 2005.

The rise in liberal identification has been accompanied by a decline in moderate identification. At 34% in 2013, it is the lowest Gallup has measured, and down nine points since 1992. Moderates had been the largest ideological group throughout the 1990s, and competed with conservatives for the top spot during the 2000s. Since 2009, conservatives have consistently been the largest U.S. ideological group.

The percentage of conservatives has always far exceeded the percentage of liberals, by as much as 22 points in 1996. With more Americans identifying as liberals in recent years, and conservative identification holding steady, the conservative advantage of 15 points ties the 2007 and 2008 gaps as the smallest.

The key finding, however, is not in the headline, but in the breakdown.  Only Democrats have become more liberal, the rest of the country, particularly amond Independents, is as conservative as ever (emphasis added):

In fact, the rise in liberal identification among all Americans is due exclusively to the changes among Democrats. Independents are no more likely now than in the past to describe their political views as liberal. The main change in independents’ views is that they increasingly call themselves conservative. That could be related to recent developments in party identification, with fewer Americans now identifying as Republicans and more as independents. Thus, the change in independents’ ideological preferences may be attributable to former Republicans, who are more likely to be politically conservative, now residing in the independent category. 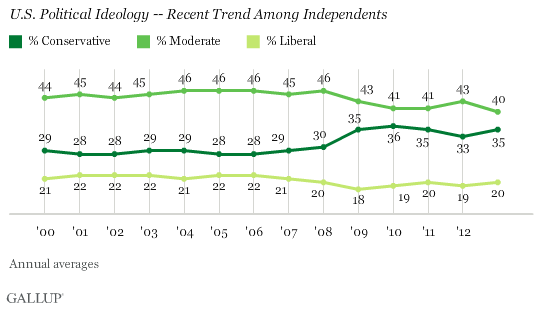 This is just the beginning of great Democrat revolution in 2014! They will retain the Senate and retake the House. I mean look at the headlines on The Hill! It’s a done deal.

I wonder why Gallup even bothers to report a 1% delta, which seems like its gotta be within their MOE.

And this is no great revelation, if true, since BOTH parties are seeing the effect of disaffection.

We have two liberal parties, so it should be a surprise that there are more people going without party identification…

Because Gallup is a card-carrying defender of the liberal ideology.

Gallup failed to report the 1% increase only exists because “leftist” IDing is up 17% among their dead and their illegal Democrat voters!

For the first time in my life Rasmussen Survey called me to asked me questions. The first question was on how I thought the economy was doing, I was given a choice of 4 answers with poor being the lowest, I chose poor. The next question was something like how I thought the economy was changing. I could pick from 3 this time, changed for the better, unchanged, or I don’t know – that was it for choices.

Betty that is because they must manufacture the results that their “Pay Masters” want manufactured.

Who you gonna believe, your own eyes or the Lame-Stream Media pollers?

Asking a low information person at which end of the pole their ideology flag flys will likely bring about the default answer of “liberal.”

“Liberal” could mean free thinking or Democrat or Progressive or OWS slummer or union worker or Bush hater – any meaning that positions them far away from anyone or anything other than government sponsored TV telling them what is reality.

The 1 pt bump up in Liberal groups could be tied to Rachel Maddow’s new top dog whistle status at MSNBC and her increasingly outrageous diatribes – entertainment for the messes. Or the increase is within the margin of error.

As a statistician, my uncalibrated eyeball tells me the first graph shows, since the year The ‘Toon was first elected, that conservatives are at steady state, but liberals are steadily growing at the expense of moderates. Of course, “moderate” is usually just a code phrase for “liberal.” And, proven liberal tactic is to run as a conservative to garner sufficient moderate votes to win, while the mainstream media arm of the ‘Rat Party keeps telling the electorate how reasonably moderate-to-conservative their liberal candidates are. In fact, that tactic worked so well in 2008 that considerable numbers of so-called conservatives voted for the Kenyan village idiot.

1. To my eye, the single most significant feature of the top graph is the 50% increase in liberals since Bill Clinton’s bottom in 1995. If things continue as they are going—a big ‘if’—it looks like liberalism will achieve parity with the other two categories in twenty years or so. Moreover, the Left has been politically successful out of proportion to its numbers.

2. I’m guessing that the growth in liberalism is driven by minorities and the young. A breakdown of results by age, gender, and race would be interesting.

3. Liberalism advances despite the manifest failure of the Obama administration. Imagine if the Democrats had elected a Bill Clinton in 2004.

4. Afaic the biggest single reason for the trend is the stupidity of the Stupid Party. The center-right coalition remains infatuated with its fiefdoms and craziness; meanwhile, the State continues to grow as the Founders warned it would do unless explicitly checked.

It seems to me as though there are hardly any two people out there that have the same understanding of the word “liberal” yet it is used in political conversation as if its meaning were clear. I consider myself a liberal because (as the meaning of the root word on which it is based) I believe in liberty. Policies supported by the authoritarian left that are corrosive to our freedoms are not “liberal” in any meaningful sense of the word (anti-free-speech codes at universities, oppressive IRS activities, taking of property by regulatory fiat, etc. etc. the list is endless) yet the conventional political spectrum treats the matter as if the more “left” you are on the political spectrum, the more “liberal” you are. The Democrats and Republicans have both corrupted the term “liberal” beyond all rational meaning.