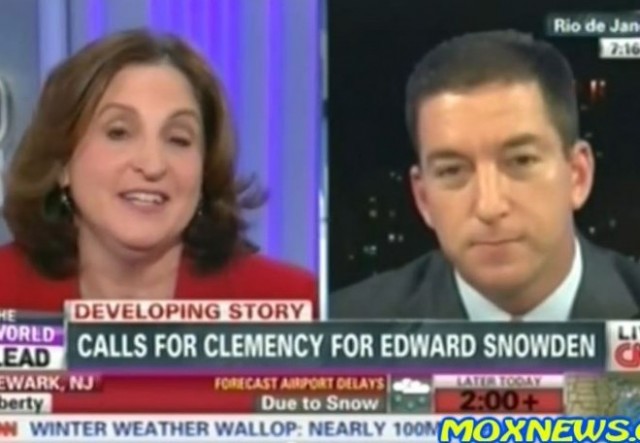 This segment between Ruth Marcus of The Washington Post (my law school classmate) and Glenn Greenwald on Edward Snowden is pretty good.

It’s being described as Greenwald being rude to Marcus, but I don’t see it that way.

I think they both did a good job.

Now we’re dealing with 2 lefties here, but Marcus gets the sympathies because she’s female, lives in DC, and works for one of the vilest leftist publications. Remember when Lazio demanded something from the vile Hillary?

He was being very aggressive and speaking over her: ‘Glenn Greenwald Goes Ballistic on WaPo’s Ruth Marcus’.

Setting aside who was rude to whom (a contest in which I hope both contestants lost), the central point remains: what is to happen to the NSA?

We know that the kind of information they’re collecting now can and almost certainly will be misused. It’s human nature, and more importantly it’s the nature of our present day political and moral discourse. People in power want the information to use against others, and once one or some start to do so the rest will want to do the same if only in self-defense.

Snowden is irrelevant to me now. He’s a traitor, he’s a hero, who cares? He’ll get justice of one kind or another someday. He’s one very flawed human being.

But the NSA: what do we do with them? What are the boundaries and how do we enforce them?

Steve, when something has Crashed and Burned as the evil NSA has, you can only Bury them.

When the NSA was created, the mission was foreign intelligence, period. After 9/11, the NSA begged for an expanded role that involved data collection on calls and internet as long as they were US – Overseas. Purely domestic traffic was supposed to be excluded but there’s a lot of speculation (and some evidence) that they’ve been collecting domestic data since 2001… since there was zero oversight. The program was so secret, until 2006, only one member of the FISC court even knew of its existence.

I’m sorry. While I’m sympathic to Snowden to a point, I just don’t see him ever coming home to the US.

The government will never be secure that they have retrieved all of the documents that Snowden liberated. Likewise, based on the same level of non-trust, how could Snowden ever live a “normal” life. He will face years, if not decades, of government snooping .. an effective house arrest.

Ruth Marcus is a disingenuous hack, about as useless for the reporting of news as the NY Times.

I’ve said it before, and I’ll say it again.

One thing about the “Snowden Affair” has always been quirky.

When Bush was still president, the leftist blogs online (and I presumed the leftist print and broadcast media operations also) reported EXACTLY, profusely, and in great detail what the NSA was doing in its spying on U.S. citizens.

So why did that not catch fire with the U.S. public when the leftists were pushing their reports….but has now caught fire with Obama doing it. Maybe it is even worse under ignorable Obama?

I’m no Marcus fan but I see her as merely deluded while Greenwald is consciously evil.

We know from his past that he is dishonest with his own readers, that he is a narcissist, that he despises America and everything it stands for, and that he believes his own poop doesn’t stink.

If you get the chance, go back through the documents/revelations of Greenwald & Snowden. Count up how many secrets they’ve divulged that are legitimate intelligence activities. Programs where we spy on foreigners and not Americans.

Spy agency has innovative ways to spy on people. Who knew?

Ruth Marcus is a dingbat. Trust the system and allow yourself to be prosecuted by a government that has already shown they have no respect for the Constitution? This is what passes for journalism today in DC. She is part of the problem.

If the U.S. had secured its borders properly (physically and by intercepting international metadata)all along then the NSA would not have need to snoop into American lives. This is the genesis of the massive overreach.

Sally, also if the borders were secured as normal, the growing trafficing in sex slaves of children and women would have been prevented I believe.

Obama has brought back slavery (think of that). And as I understand it, slavery has never ended in the middle east. They just call it by a different name, and hide it with different forms.

Given what has been revealed by Snowden and authenticated by the courts and special commissions, it’s apparent that Snowden was fully justified in its actions. It’s time for us all to CS together and admit Snowden is a hero and he won. The NSA has gone rouge and in the hands of the Obama administration, it represents an existential threat to the liberty of the American people.