How will Texas voters react to Wendy Davis having daughters fight her political battle?

How will Texas voters react to Wendy Davis having daughters fight her political battle?

Facebook commenter: “Letting her children fight media political battles for her by sending in ‘don’t be mean to my mommy’ letters is just weak.” 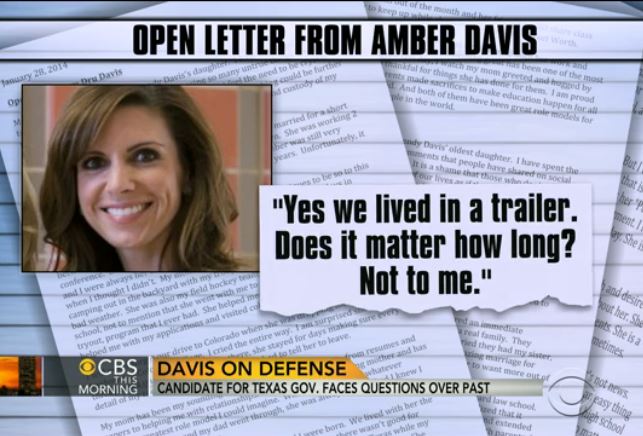 WOAI 1200 in San Antonio had an article yesterday about Wendy Davis having her daughters defend her mothering, Involvement of Davis Daughters Seen as High Stakes Gambit in Governor’s Race.

The article quoted an SMU political analyst as indicating bringing the daughters out was a risky move that might work, but that the campaign should have anticipated the issue:

“Their fundraising numbers went very well, but they seemed to be unprepared by what they should have expected, an assault by the Greg Abbott campaign on the story that Wendy Davis wanted to tell about herself and her rise from difficult circumstances to be a candidate for governor,” Jillson said. “She should have been prepared for this assault and had better answers and responses ready to go.” …

“This is really a new candidate to statewide office being rocked by charges that should have been anticipated,” Jillson said. “It remains to be seen whether she will be taken down by these charges.”

One of the comments to the article caught my eye, because it made a point similar to what I made in Wendy Davis is the Deja Victim candidate, that the public may react negatively to a candidate who has her children fight her battles for her. Here’s part of the comment, with the full comment embedded below:

Letting her children fight media political battles for her by sending in “don’t be mean to my mommy” letters is just weak. She needs to put on her big girl panties, accept the reality of what she has chosen to do, and stop whining about it or she has given up before she even gets started.

The Taiwanese animators also are on the case:

It’s fascinating how the Davis camp keeps on insisting that the exposure of her lieography was an Abbott dirty trick when they full well know that it was a lib journalist who noted inconsistencies, did the digging, and reported on them. Davis’s camp is knowingly building a false narrative as part of the “war against women” lie. Lies all around.

It’s pretty pathetic that she sent her kids out there. That’s the much-loved smell of desperation in the morning.

“Yes we lived in a trailer. Does it matter how long? Not to me.”

What do truth and facts matter? Feelings, that’s what matters. Haters!!

She has always been a weak candidate from the start. Certainly no experience to hold the position of Governor. She is also another piece of propaganda put out there. I personally am sick and tired of the phony candidates being chosen for us. They do not stand for the people nor for America as a whole. They are usually fronts doing only the bidding of their benefactors who aren’t the people.

1000% agree – McAuliffe here in Virginia was chosen by the Clintons and Dems to turn my “swing state” BLUE. Davis is another chosen, manufactured candidate, being positioned to do the same for Texas – they hope.

I read somewhere recently (or maybe heard it on Rush this week), that if the Democrats turn Texas BLUE, then the country is done……they “own” New York and California, already; and, with Texas, Democrats would be in control of winning all national elections.

Let’s hope that Texas is better prepared than Virginia was to combat this.

What matters is that she LIED, which makes her a LIAR. It is time to get the LIARS out of politics.

I don’t know…if you get rid of the liars, there were be almost no one left….oh, wait. I get it!

That bolt of lightning sure made it clear, huh?

Forgot my 🙂 on my reply.

You can’t unring a bell. Wendy just looks desperate and brings to mind Michelle Bachmann trying to explain away her crazy comments to Bill Maher.

Yes, you caught me lying, but that was then and this is now. What difference at this point does it make?

It makes a lot of difference until there are four or more bodies. Then, not so much.

Wife and I, and our two little kids, lived in a tiny trailer in Radcliff, Kentucky, in 1970. We were able to pull ourselves up and out. So what, as far as anyone else is concerned.

Hey, I lived in a trailer, too.

I don’t consider it a tragic episode in my life, either. I was married and in the military. I was delighted to find a trailer in which my bride and I could live.

There are any number of retirees who live very comfortably in trailers…or the newer kind with their own motors we call RVs.

WTF is up with this implicit snobbery by “Mommy Dearest” Davis and her abused kids?

We lived in a trailer when we were farming my stepfather’s 400 acres up in Minnesota. We had a big barn, grain silos, corn cribs, and utility sheds. We even had a combine. I can’t imagine what that thing cost. Today they’re $300K-$450K new. When I’d just got out of the service, I made a lot of deliveries for a big furniture chain. There were a lot of older folks living in trailer parks down in Kissimmee and St Cloud Florida who were living a pretty good retirement life. They were certainly nicer than the apartment I was living in in Orlando.
Trailer does not equal poverty.

With all the attention focused on Wendy WannaBe I wonder what ACORN is up to in Texas.

Is living in a trailer supposed to be a horrible punishment or something? While building our first house, we (and our two kids) lived in an 8×35′ single wide for a year. While building our most recent house, the two of us lived in an 8×29′ travel trailer with no heater for two years. What ever happened to the pioneer spirit in America? I guess we’ve become a nation of whiners…

Not among Texas Demoncrats. These people have no values.

I, too, lived in a trailer with my two girls – gasp, I was a single mom, too! But unlike Wendy, I went to school at night, worked an eight hour job and climbed my way up to highly technical job without the help of a man (except my dad who stayed with the girls while I went to school). Boo hoo, Wendy.

Know several people living in trailer parks with 2 late model cars, SUV, motorcycle or ATV(or both) and boat.
Currently living in a 32×80 double wide, 4bdrm, 2ba,living room, dining room, family room(with fireplace)and large dine-in kitchen. Cost $65,000.00 similar house would have been around $200,000.00 and we would’ve had another 20 years of payments.

I have yet to see any evidence that the Abbott campaign attacked Wendy Davis’ bio whatsoever. Last I heard it was a reporter’s own research. I suppose that reporters are so routinely led to opposition research that to Davis supporters, the idea of a competent reporter doing this on his own simply does not pass the smell test…

the reporter himself said he had no contact with the Abbott campaign on this.

Yet the Left runs with the lie.

Lies and hypocrisy are all that the Left has.

The trailer is not the problem. It’s the Trash!

The question is how will Texans feel about her daughters coming to her defense.

The better question to ask is why there is a war on men from the Davis campaign?

Using men and then throwing them away isn’t anymore a win/win for Texans than the throwing away a baby in the womb because it is inconvenient.

All Wendy has to offer Texas is progressivism, abortion, corruption, greed and ruin.